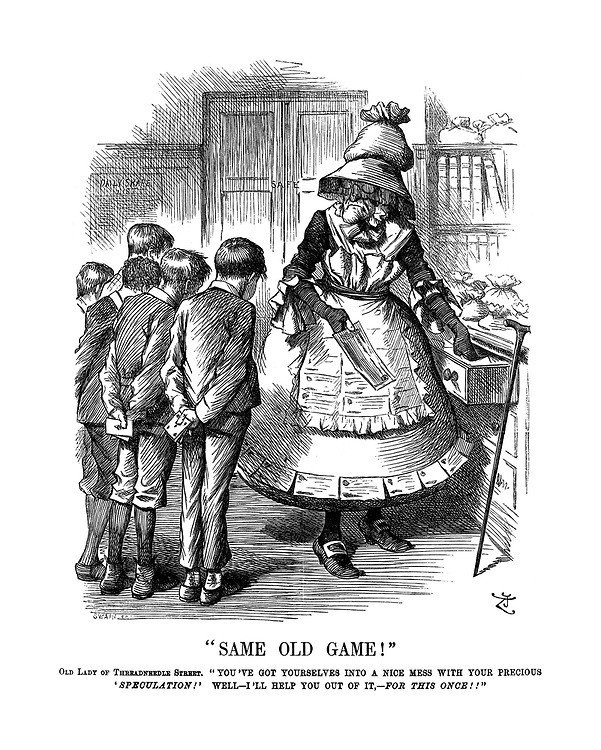 “You’ve gotten yourselves into a nice mess with your precious ‘Speculation!”

“Experience will not prevent speculative manias, any more than it will prevent ambitious wars; and we see no particular reason why intelligence should[either]”

In 2018, the venture capital market has set numerous record highs across a few different measurements, particularly within deal valuations. As with any asset class, this has led to increased concerns from many investors. Crunchbase, in its 2Q report on the VC market, stated:

“All fun times must come to an end eventually. The current climate of late-stage largesse and general ebullience in the market raises some important questions about sustainability and long-term value appreciation prospects.” 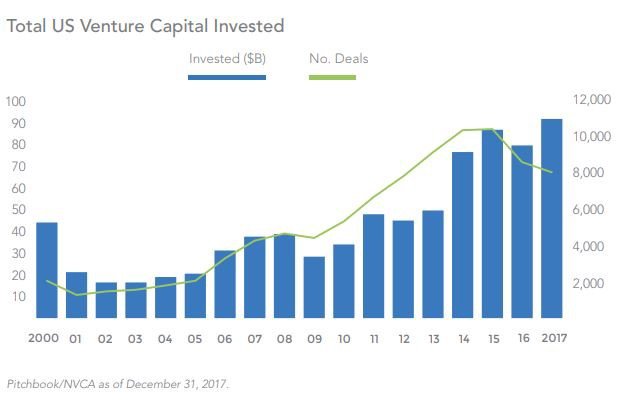 This is not to suggest that there is an impending crisis in venture capital. However, the current VC market does represent investor’s behavior, which appears to be headed down the all too familiar path of punch-drunk valuations, and performance chasing.

Investors would be wise to remember that all assets, including venture capital, are capable of leaving you sad and hungover, regretting last night’s investments:

During the late 19th century, a new form of corporate financing began to rise in popularity among British businesses: the Limited-Liability Corporation. In fact, from 1884–1893 the capital comprising limited-liability companies in Britain had more than doubled, from £475M to £1.1Bn. Capitalizing on the opportunity, Sir Edward Guinness enlisted Barings Bank to underwrite a public offering of his company’s shares (a process similar to an IPO).

The IPO was a huge success for Guinness, as shares rose 60% in the first day of trading, and continued to perform reasonably well. However, investor’s response to the brewer’s public offering was a red flag, and signaled that a recession may be imminent. Sure enough, a crisis fueled by speculation occurred in 1890.

Today, the investing landscape is quite the opposite. Due to a variety of reasons, particularly increased regulatory costs, fewer companies are going public. Consequently, private market investors, such as venture capitalists, have become increasingly popular.

Recently, however, the flow of assets into venture capital have increased without a simultaneous growth in investment opportunities. Predictably, this has led to higher valuations as VC firms fight for fewer deals, and have more cash to spend.

Venture capital has certainly been successful in recent years, but like the Guinness affair, investment behavior and valuations may be starting to signal that trouble lies ahead.

When the prospectus for Guinness’ IPO was distributed to investors, those who even bothered to review the financial statements were not overwhelmingly impressed. Ever the voice of reason, the Economist wrote:

“Instead of one year, take the average of say 10 years, and also calculate the present market value of the £6 millions of capital asked for, the calculation works out that £8.5 millions (…) is being paid for a concern whose profits during the past decade have not average more than £380,000 per annum”

Even in the late 1800s, financial commentators recognized that investors were practicing the all too familiar habit of overvaluing companies as they chased returns.

Over the last few years, the venture capital market has received similar criticisms. Even though we are only half way through 2018, investments for this year are on track to set a new record high. In addition, July posted a record amount of $100M+ VC rounds, which was in line with the spike in recent trends.

As more companies receive a higher valuation in the smaller end of the deal spectrum, VC firms and investors appear to be chasing higher returns, and paying less attention to valuation. 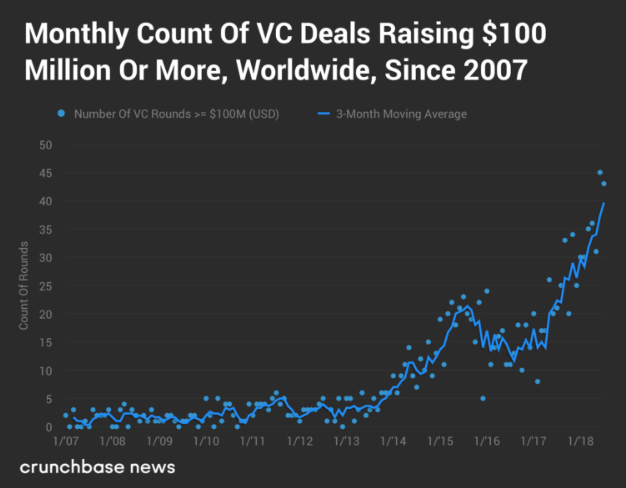 Unfortunately, market valuation data from the 1880s and 1890s is not as readily available as venture capital. However, news articles detailing the chaos that erupted as Baring’s began accepting investor’s subscriptions are telling. The Daily News wrote:

“Nothing within the memory of a living man had been quite like it…On Saturday morning Baring’s place was literally besieged.”

The crowd of investors became so out of control that a special police unit was even called to guard the bank’s entrance.

Eventually, speculators literally threw themselves at the investment opportunity, as they tied their subscription forms to rocks, and hurled them through the Baring’s Bank windows in a desperate last attempt to purchase shares. The Spectator, a London publication, argued:

“The scene which accompanied the sale of the Guinness brewery on Monday, is sufficient to show that most of the conditions for a ‘mania’ exists.”

Some contemporary sources estimated that Guinness’ shares were 30x oversubscribed, which exhibits the incredibly high level of investor demand.

Similarly, the demand for venture capital is increasingly rapidly, and the value of VC deals in 2018 is expected to reach its highest level in a decade.

Just as the drunkard always rushes for another Guinness at last call, humans will repeatedly leap at the chance to chase higher returns.

What is fascinating, and equally troubling, is how conscious some investors were of the speculation in the 1880s. Many of them understood that investors had been swept up in a speculative mania, and were headed for an inevitable failure. In 1887, one prudent investor complained:

“The improvement that has taken place in the market value is the result of nothing else than a greater activity of imagination on the part of the buyers. They persist in assuming that [Mr. Guinness]…vastly underestimated the value…[and] can only be corrected by adding fancy premiums to their valuations”

The awareness of late 19th century investors is depressing, as it means that not only do humans continue to make the same investing mistakes, but also repeatedly ignore the warnings from those around us.

Forecasting the future is a fool’s exercise, clearly. We know that the venture capital market is not at the level of hurling contracts through the windows of VC firms, but we can see that the fund flows and valuations are at uncomfortable levels.

We also know that the signals for what will trigger the next crisis have probably already appeared, and that human nature has once again kept us blind to their warnings. For now, investors can continue drinking their Guinness, until they can no longer delay the inevitable hangover.