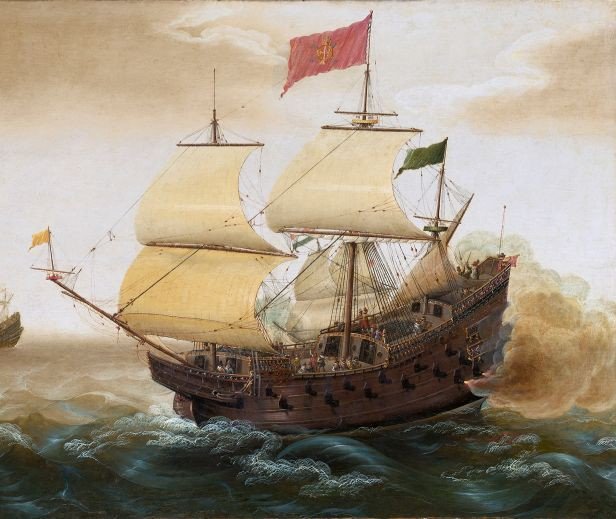 A great deal of investing comes down to a process of identifying innovators, scrutinizing imitators, and screening out idiots.

This principle is applicable to everything from stock-picking to assessing management teams. Nowhere, however, is the concept more prevalent than in venture capital.

Every day, VC firms in Silicon Valley and beyond are inundated with pitches from startups touting innovative products and groundbreaking technology. Therefore, the clear determinant of a VC firm’s success lies in their ability to locate genius in a sea of mediocrity.

The obvious difficulty of this endeavor is reflected in the breakdown of a VC firm’s expected returns. As industry veteran Fred Wilson summarized it:

To put it much more crudely: 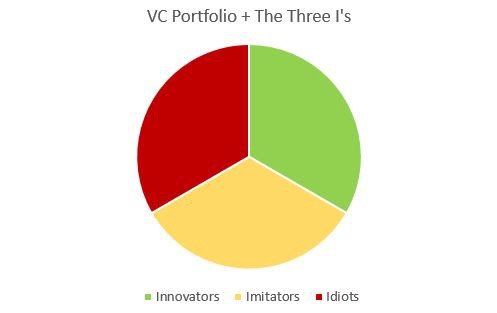 An already difficult process then becomes even harder after the wild success of a truly innovative company. For example, Uber’s dominance prompted an outbreak of “Uber for X” startups.

From a behavioral standpoint, it’s not easy for an investor to resist companies claiming to be the ‘Uber for X’ after witnessing Uber’s success.

To be clear, there have been successful imitators. Wag!, the “Uber for Dogs”, being a prime example.

However, for every imitator like Wag! and Lyft, there is a longer list of failed imitators. Cherry, for instance, was the “Uber for carwashes” that eventually closed up shop.

That said, even the successful imitators aren’t perfect… poor Fluffy.

During the late 17th century, London’s nascent stock market experienced a wave of innovation. In 1687, only 15 public companies were listed on the London Stock Exchange. By 1695, however, that figure had increased tenfold.

The impetus for this investment boom is partially due to the Nine Years War, which restricted overseas trade with foreign powers. British investors were forced to deploy their capital into domestic investments as a result.

“A great many stocks have arisen since this war with France; for trade being obstructed at sea, few that have money were willing it should lie idle, and a great many that wanted employment studied how to dispose of their money…which they found they could more easily do in joint-stocks, than in laying out the same in lands, houses or commodities…”

What truly kick-started this period of speculation and startup investments, however, was a successful treasure hunt.

Sir William Phips was described by his contemporary, Daniel Defoe, as someone who “sought wealth and advancement through money-making schemes financed by others”.

A trader and seafarer by nature, Phips commanded boats making frequent trips to the West Indies. In the course of these journeys, Phips heard rumors of a sunken ship in the Caribbean , the Concepción, which held unimaginable treasures.

Though many would scoff at such gossip today, the rumors were not unfounded. The Spanish had transported scores of precious metals from Mexico for over a century, and many of these ships did not make it home.

Before long, Sir Phips decided to try his luck at locating the Concepción. Just as the modern founder ventures to Silicon Valley in search of funding on Sand Hill Road, Sir Phips returned to London in search of an investor.

Phips found his 17th century venture capitalist in the Duke of Albemarle, and his syndicate of investors. The group of financiers quickly formed a small joint-stock company for funding the expedition. This joint-stock company could be considered a VC firm equivalent.

This was truly ad-venture capital.

Eventually, the Duke of Albermarle proved to be one savvy venture capitalist. After endlessly searching for the sunken Concepción, Sir Phips finally located his treasure in 1687.

In the wake of his incredible discovery, Phips and his crew spent over two months hauling up 32 tons of treasure from the ocean floor. 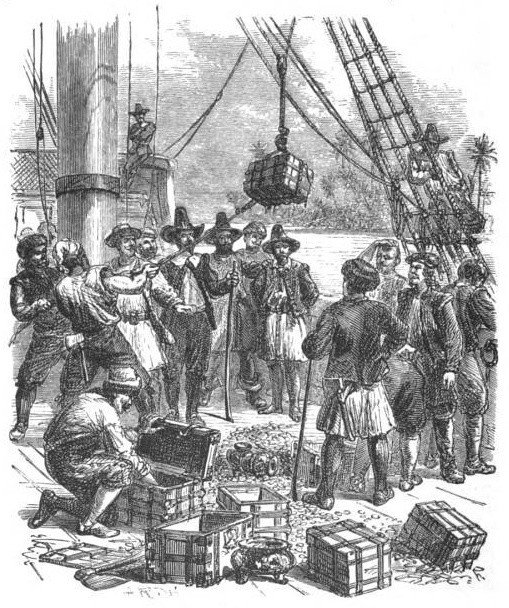 Hauling up the spoils

Upon the treasure hunter’s return, the Duke of Albemarle and others received an astronomical 10,000% return on investment.

Sir William Phips represents a true Innovator. The treasure hunter had a bold, and risky business proposal, but offered an extremely enticing return if it proved successful.

“[Wreck-recovery companies] made much noise at this time, and shares for them were presented to persons of distinction to give reputation to the affair and to draw on others. So the patentees were sure to be gainers but the sharers under them lost all they paid in, some of whom, it seems, were men of good understanding but were allured by the hopes of getting vast sudden wealth without trouble.”- Anonymous (1692)

Reflecting the excitement surrounding new technologies and inventions, there were a record number of patents filed in London between 1691–1693,

The speculation in treasure hunting specifically is evidenced by the increase in patents related to diving and shipwrecks during the 1690s.

In this period, patents provided a level of status and credibility that investments from prestigious VC firms similarly offer startups today. One Londoner commented in 1695, “Oh, a patent gives a reputation to it, and cullies in [i.e. takes in] the company”. 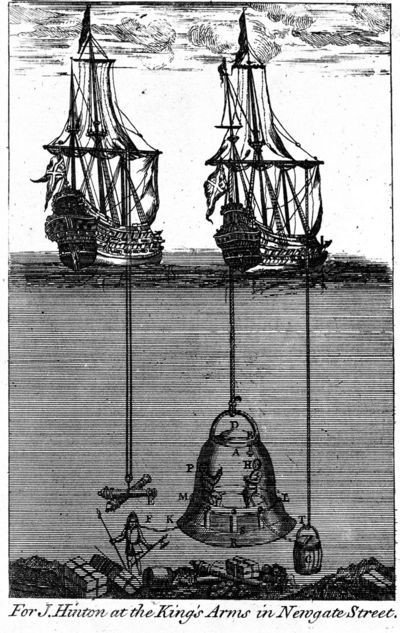 While it’s unclear whether Phips had used a similar device himself, these new products captivated British investors. In response to investor’s thirst for a 10,000% return, new companies advertised diving engines for salvaging sunken treasure off the ocean floor. 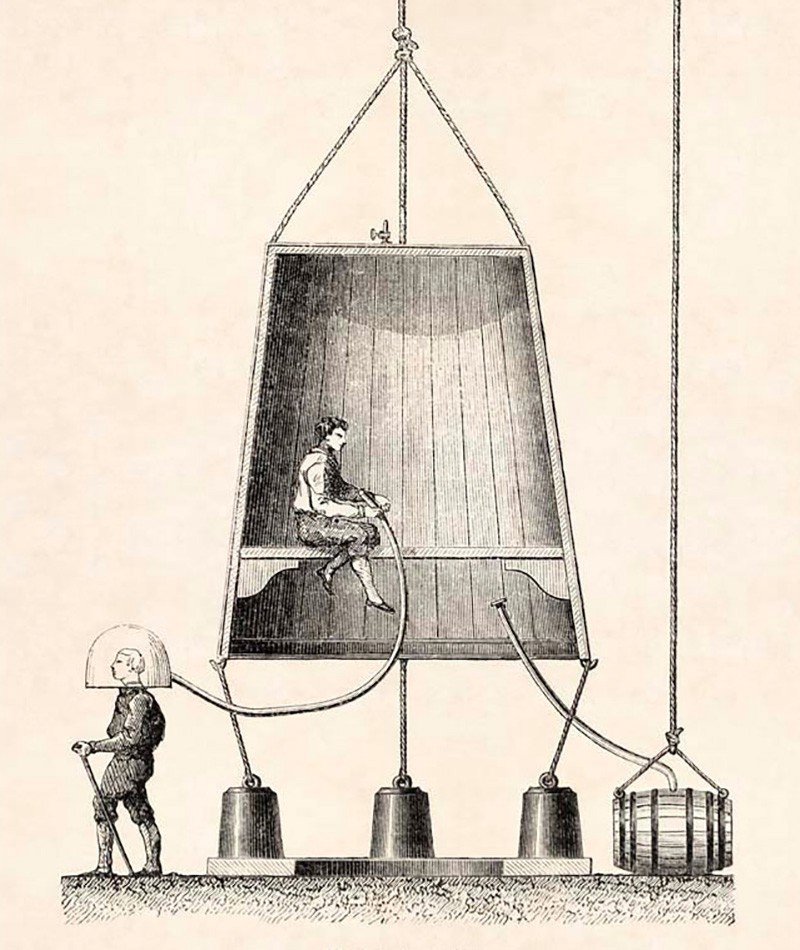 The prospectus of one such company promised investor’s a 100% return.

Just as the success of modern companies like Uber led to an outburst of “Uber for X” companies, Sir Phips’ expedition sparked the formation of numerous diving and treasure hunting companies.

The below is only a partial list of such companies: 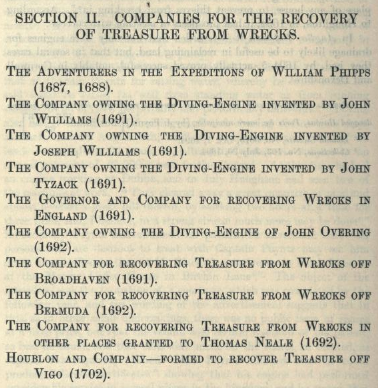 Despite the number of new companies formed to emulate Sir Phips’ success, “none of these expeditions were successful — indeed the only ‘finds’ consisted of a few cannons”.

“So I have seen shares in Joint-Stocks, Patents, Engines, and Undertakings, blown up by the air of great words, and the name of some man of credit…and many families been ruin’d by the purchase [of these shares].” — Daniel Defoe (1697)

In this bizarre treasure hunting bubble of the late 17th century there were plenty of idiots. On the funnier side, there were those that sought patents for ideas like “catching fish with lights”, and the “sea-crab” apparatus.

However, investors were just as idiotic. Typically sensible Londoners embraced their inner idiocy as the cravings for profits grew stronger. The bubble even drew in former critics:

“Captain Poyntz came forward with a petition on April 20th, in which he stated that persons who had secured patents for wrecks, sold shares at ‘extravagant rates and had as yet done nothing’. He too obtained a patent on April 29th.”

There were also many that suffered a fate similar to Daniel Defoe, who had invested and lost £200 in John Williams’ diving engine company. Later, he complained that Williams had only “pretended to be a skillful engineer in retrieving wrecks”.

Defoe, unable to identify Williams as an Idiot, was forced to deal with the consequences. Despite his best efforts to sue Williams, he eventually lost every penny of his investment.

Every investor wants to put their money in the Phips Treasure Hunt. However, finding Sir Phips is a treasure hunt in itself.

If you can identify Sir Phips before he embarks on his expedition, then the risk is worth the return.

Should you miss out on such a successful investment, however, ensure that you carefully scrutinize future opportunities borne out of its success. While imitators can certainly provide an attractive investment, you may end up holding shares in the “sea-crab” company.

Venture capital firms today acknowledge the difficulty of identifying the Innovator in how they construct their portfolios. The average investor should similarly ensure that they have a check in place.

Fail to identify the idiot in advance, and pretty soon you become the idiot yourself.

After losing his full investment in a sham diving company, Defoe lamented: