By Jamie Catherwood October 13, 2019 No Comments 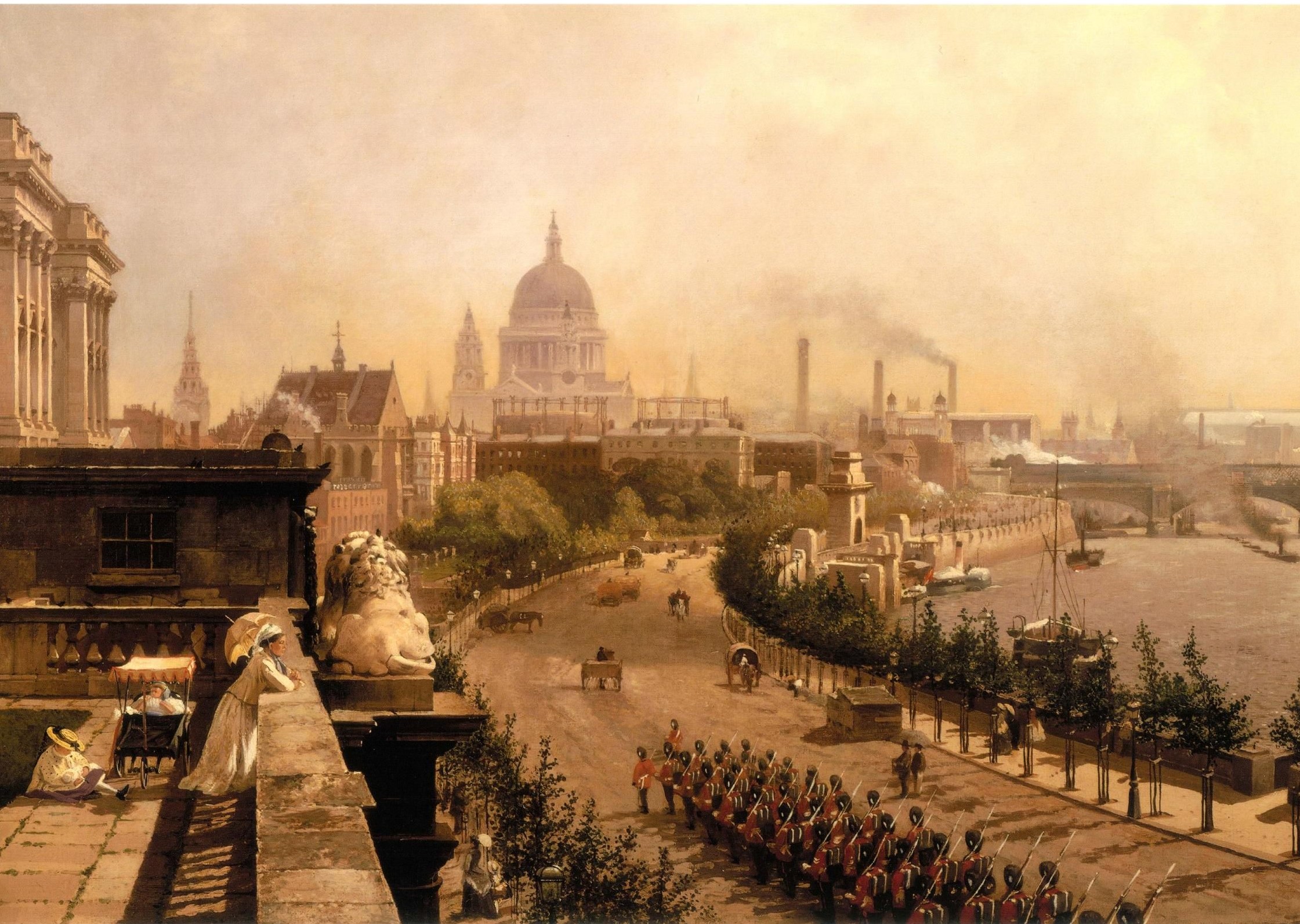 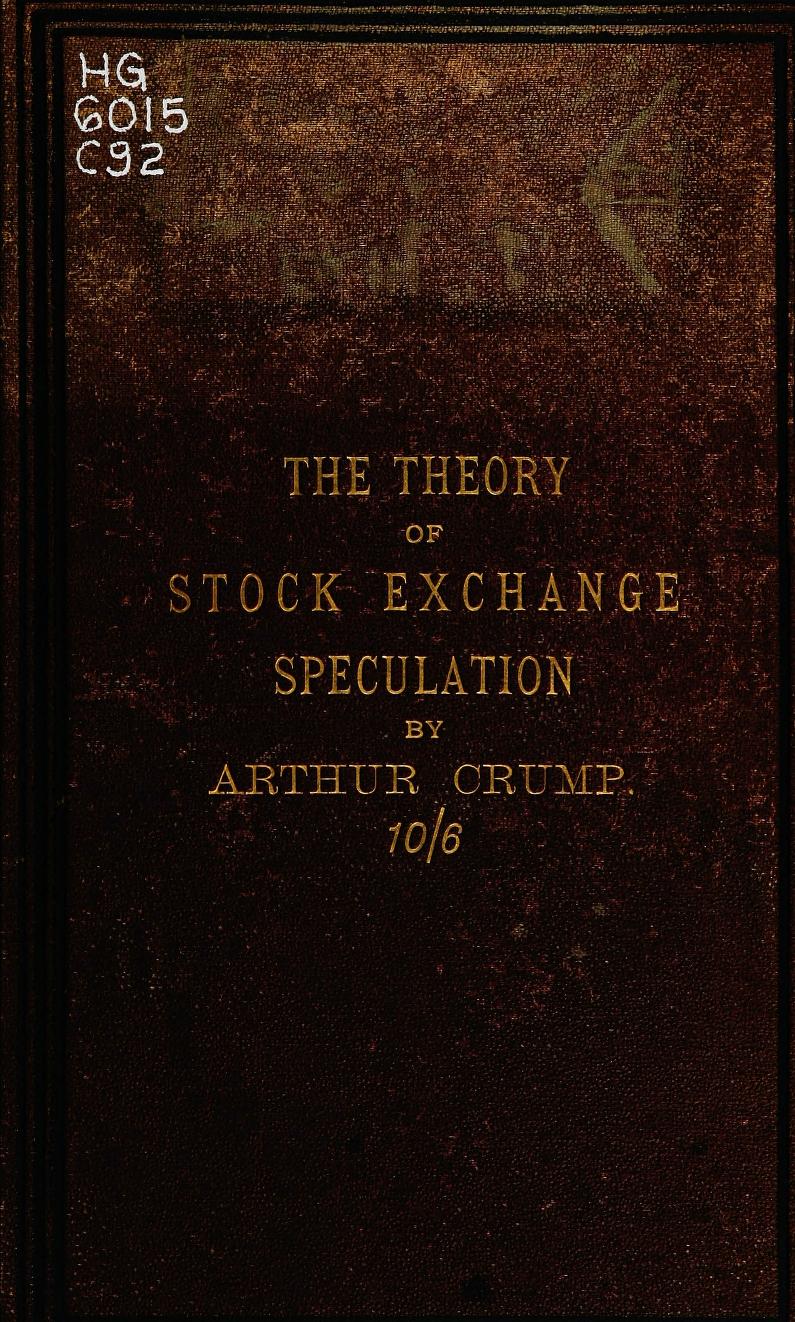 The Theory of Stock Exchange Speculation (1874)

A fascinating look at speculator’s strategies, and their view of the markets in 1874. Filled with stories of both successful and unsuccessful speculations, I recommend finding an interesting section in the Table of Contents that stands out to you, and dive in! Since I work at a quant firm, I opted for the section titled ‘Speculation by Machinery’. At the very least, enjoy an excerpt from the introduction:

‘Our object in writing this book is to endeavor to show to persons who may contemplate trying their hand at Stock Exchange Speculation, the improbability of their hopes being realized… It is melancholy to think of the vast sums of money that are invested, in the most serious sense of the word, annually by Stock Exchange speculators in the purchase of a sorrowful experience…

He would be a bold man who guaranteed to pilot a young speculator through the stock markets, and bring him out to a certainty with a profit. If a speculator asks the advice of what we will term “an old hand,” and it is in his interests to tell him what he really thinks, he will say: “leave it alone”.’

Société Générale launched the world’s first closed-end equity fund in 1836 with the intent to provide a cheap source of diversification for small investors. Article 2 of the fund’s prospectus stated

‘The company’s purpose is to present to the investors “a placement of the social capital in a large number of establishments” to have protection against reverses that one of the establishments might experience momentarily.’ 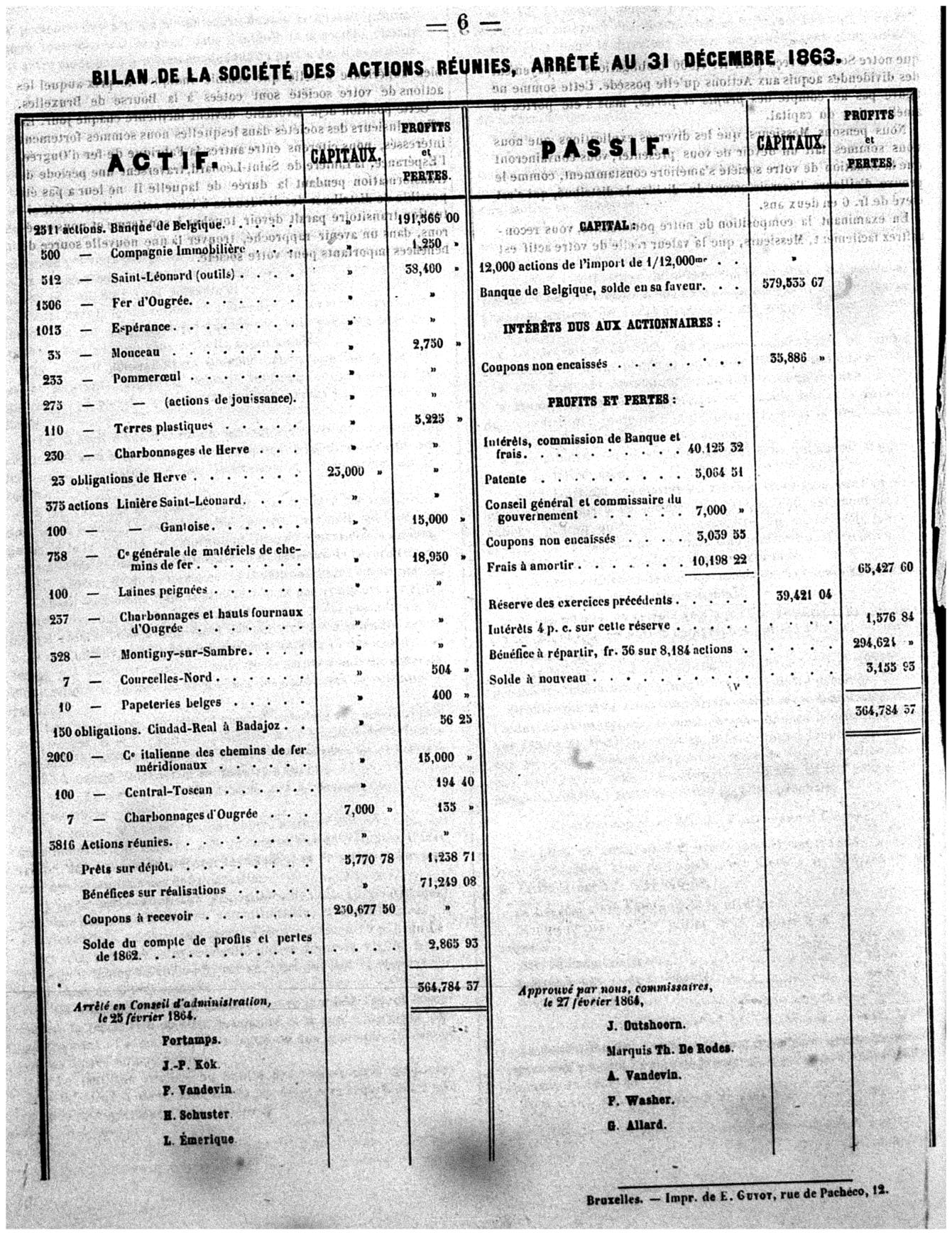 This article by Gertjan Verdickt and Jan Annaert analyze whether these small retail investors were better off managing their own portfolios (Active Management), or buying into an investment trust like the one offered by Société Générale (Passive Management). It is important to remember that these trusts were designed specifically for small investors.

The paper’s conclusions are quite fascinating, and provoke broader thoughts on the markets accessible to small and wealthy investors. For the results in this paper demonstrate that the more expensive shares (in nominal price, not valuation) outperformed the market. However, these shares were not available to smaller investors, who could not afford the steeper prices. For example, not many people can afford to buy a whole share of Amazon stock costing ($1,700). The chart below shows the difference in returns between Cheap and Expensive shares. 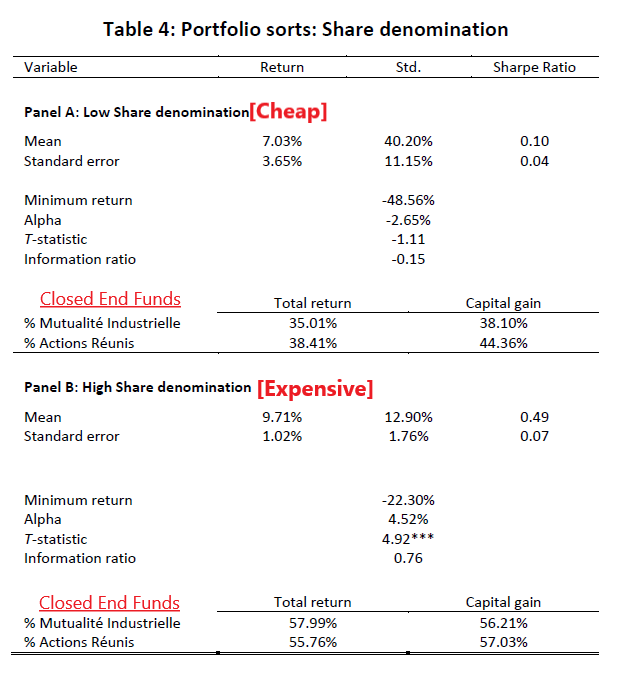 This notion of higher alpha in markets only accessible to wealthy investors is comparable to the classification of ‘Accredited Investors’ today, who can access Private Equity, Venture Capital, Hedge Funds, etc.

‘We choose this metric since it is easily observable, comparable and important for less-wealthy investors. Arguably, less-wealthy investors were only able to choose from stocks with low nominal prices. If these investment trusts were truly targeted towards smaller investors, they would be able to outperform lower-priced stocks.’

The investment trusts offered to small investors offered better performance than individual stock picking of Cheap shares, but wealthy investors with access to Expensive shares were better off staying ‘Active’.

The Decline of Secured Debt

As the two charts at the top of this page demonstrate, there has been a significant decline in the issuance of secured debt as a percentage of total debt. In fact, from 1900 to 1943, the ratio of secured bonds to total bonds issuance declined at a rate of 0.6% annualized. In 1900, secured debt issuance as a fraction of total bond issuance was 98.5%. By 1967, this figure stood at just 32%.

This paper offers a few reasons for why this has occurred. The authors argue that the improvement in accounting standards had a significant impact:

‘As accounting became more reliable and lender monitoring more informative, lenders may also have become more willing to use covenants as trip wires, giving them the option to take collateral under the right contingencies rather than up front.’

The decline in modern companies’ tangible assets has also had an effect: 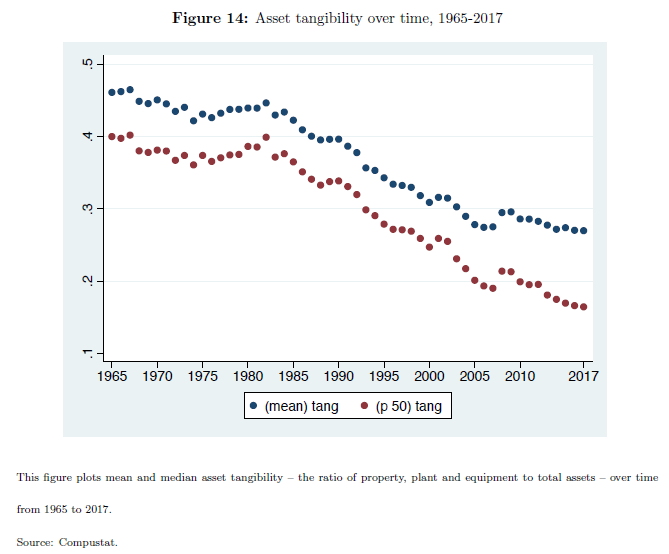 Many political pundits and economists have argued that the global rise of populism in recent years has largely stemmed from the aftermath of the Great Financial Crisis in 2008. Is there a historical precedent for this argument? This article sets out to answer that very question.

Across 20 developed countries, this paper assesses the political consequences of financial crises over the last 140 years through studying more than 800 general elections. Their analysis finds that ‘On average, far-right parties increase their vote share by 30% after a financial crisis.’ 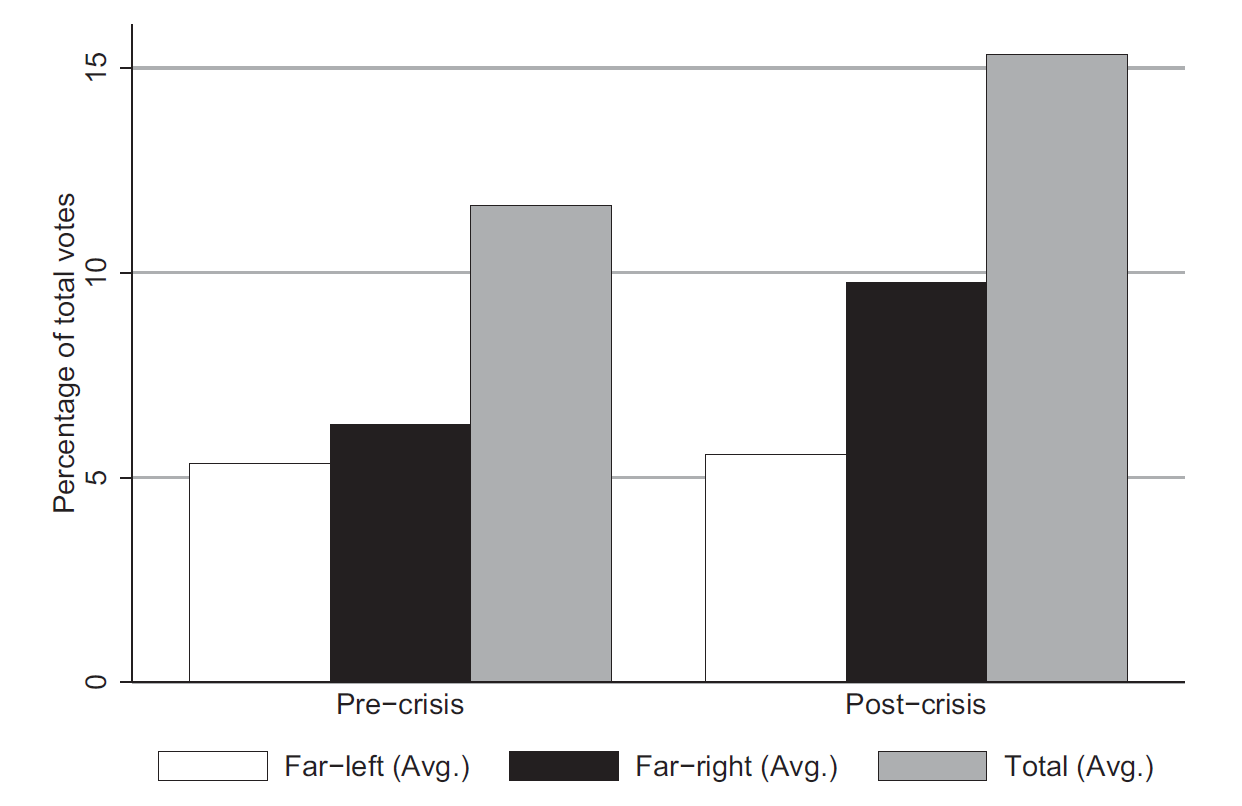 Equally interesting is their conclusion that only Financial Crises have this large impact on the political process:

‘Financial crises are politically disruptive, even when compared to other economic crises. Indeed, we find no (or only slight) political effects of normal recessions and different responses in severe crises not involving a financial crash. In the latter, right wing votes do not increase as strongly and people rally behind the government. In the light of modern history, political radicalization, declining government majorities and increasing street protests appear to be the hallmark of financial crises.

In so far as people blame central banks for exacerbating inequality through quantitative easing, the authors end their article by acknowledging this argument:

‘As a consequence, regulators and central bankers carry a big responsibility for political stability when overseeing financial markets. Preventing financial crises also means reducing the probability of a political disaster.’

Monetary Policy and Asset Prices: A Look Back at Past U.S. Stock Market Booms 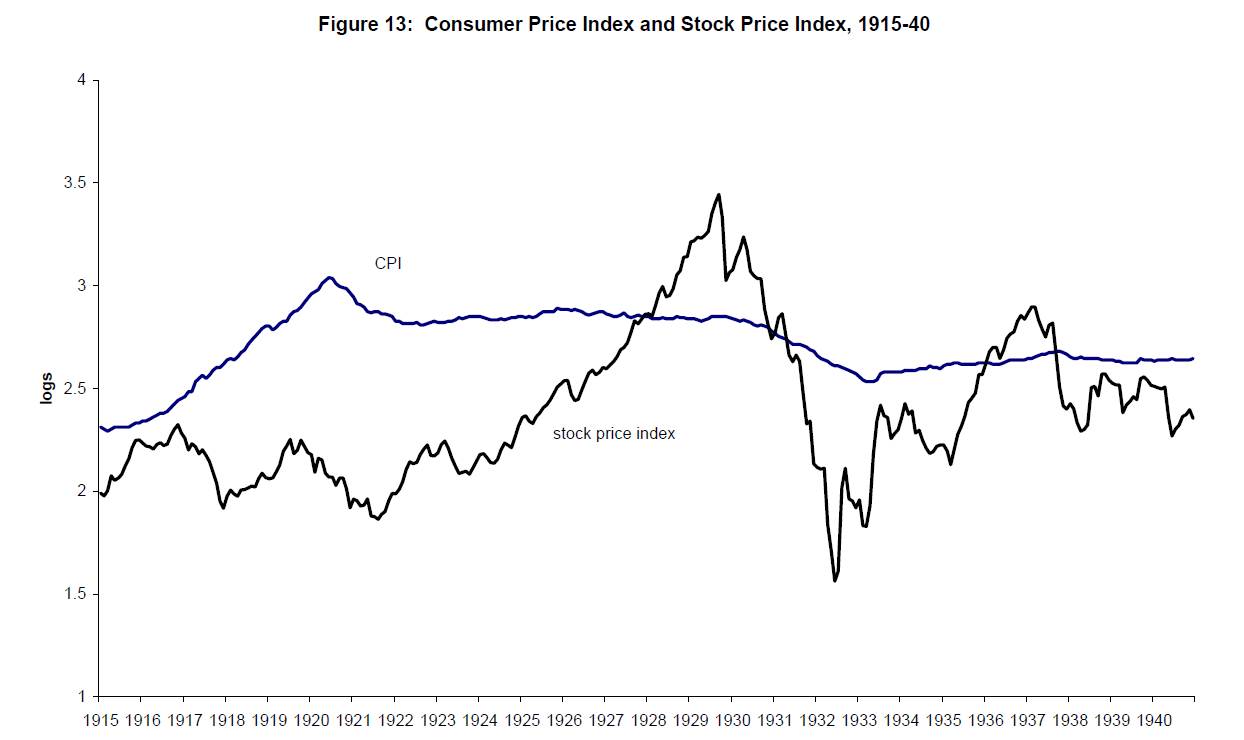 Speaking of central banks and stock markets… this next paper covers the relationship between monetary policy and asset prices stretching back some 200 years. At a high level, their research shows that stock market booms occur in all types of macroeconomic environments, and the authors find:

‘No consistent relationship between inflation and stock market booms, though booms have typically occurred when money and credit growth were above average.’

However, they still point out some clear patterns that are common across the period studied (1834 – 2000):

‘1. Most booms occurred during periods of relatively rapid economic growth and, to the extent it can be measured, productivity advance. This suggests that booms were driven at least to some extent by fundamentals.

2. Many booms also occurred during periods of relatively rapid growth of the money stock and bank credit, reflecting either passive accommodation of booms by the banking system or expansion of the monetary base via gold inflows or monetary policy actions.

4. […] The old adage that “war is good for the market” does not seem to always hold up. Stock market booms occurred during World War II and to a lesser extent the Civil War, but market performance was relatively poor during World War I and the Vietnam War.’ 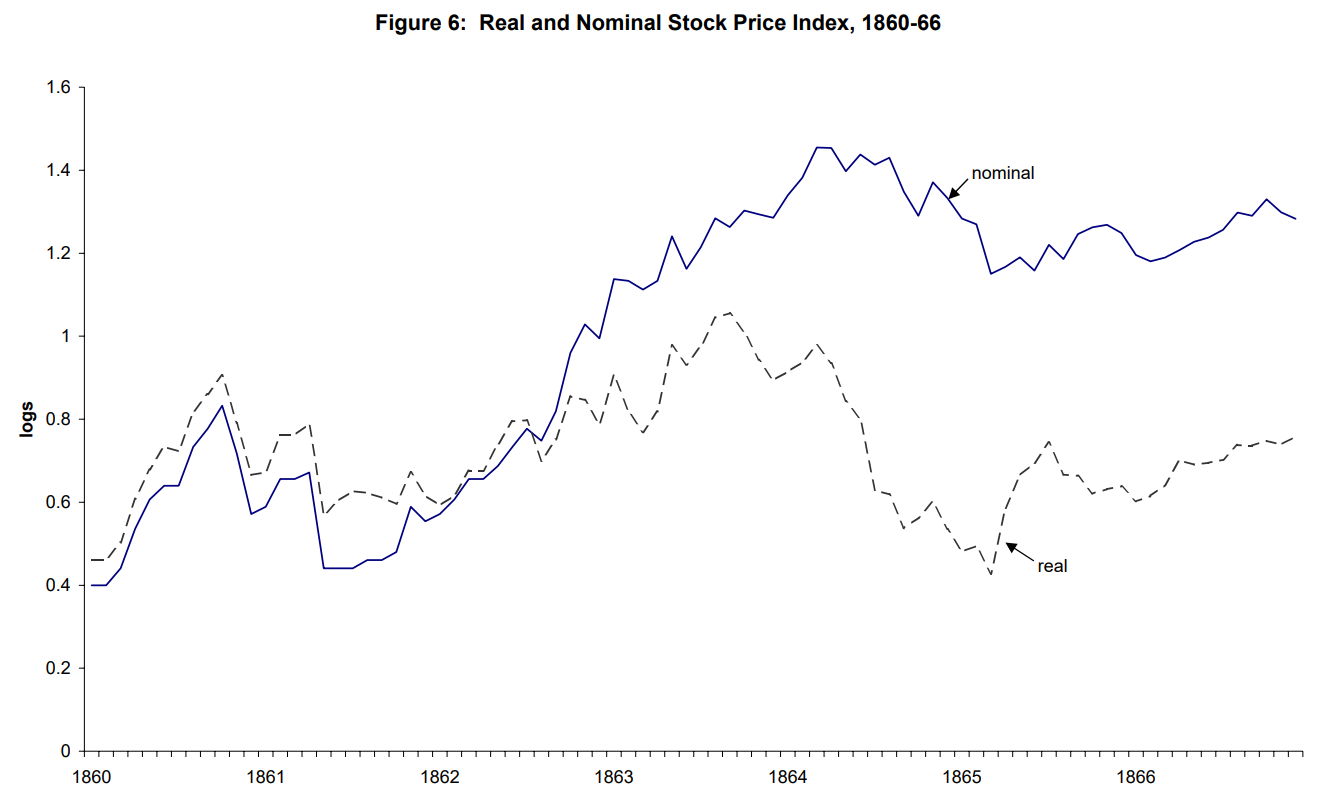 Regardless of gender, a successful entrepreneur is just that: an entrepreneur. This article by Jennifer Aston and Paolo Di Martino covers the role of female entrepreneurs in England, and provides the credit that they deserve. They begin by arguing that:

‘Only a small section of this otherwise vibrant historiography has examined the role of economically independent nineteenth-century women, and far fewer again have looked specifically to the successes and failures of female business owners. This hole in our understanding is a direct result of the long legacy of a traditional literature which argued that men and women belonged to different spheres, with the public and economic world reserved almost exclusively for men.‘ 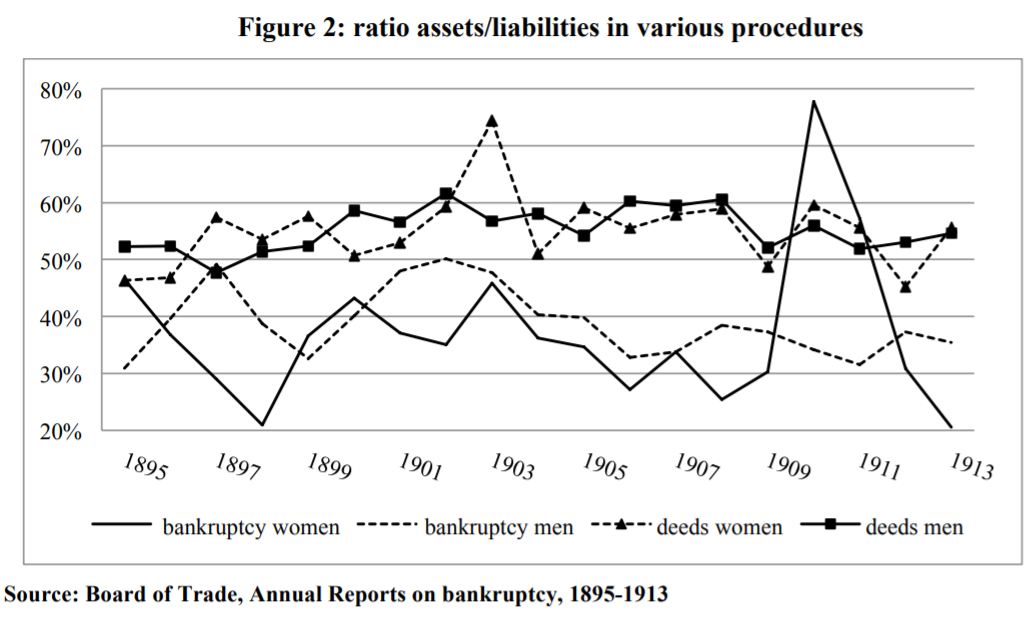 ‘The picture that emerges from this paper is, overall, of female entrepreneurs who were as successful, if not more so, than their male counterparts. … The proportion on female failures is in line with the share of female business owners over the total of the population. Women, however, operated smaller businesses which were more exposed to turbulence; they were therefore not acting in more protected markets and/or in more conservative ways, as often argued in the past. The claim that the success of women might be due to the less risky nature of the industries in which they tended to operate does not find support…

‘The world of female businesses in Victorian and Edwardian Britain was not so very different from the male one in terms of business practices, attitude to risk, and relative success.’