By Jamie Catherwood October 27, 2019 No Comments 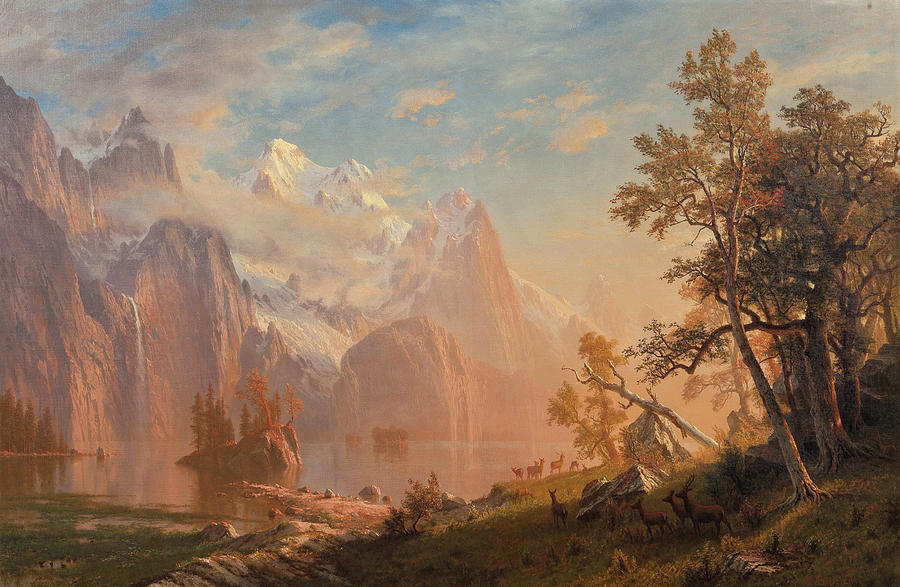 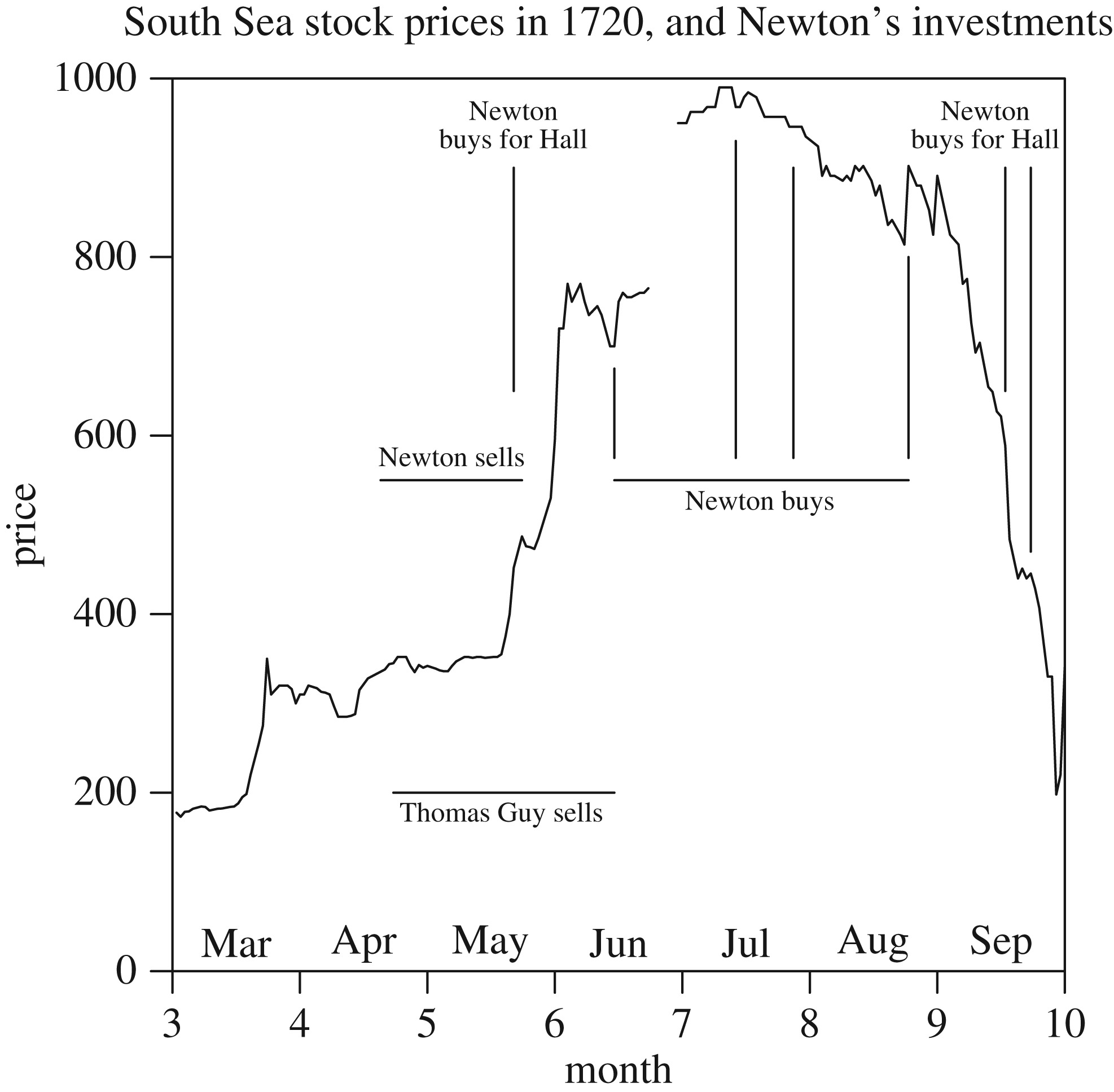 ‘[I] could calculate the motions of the heavenly bodies, but not the madness of the people.’ 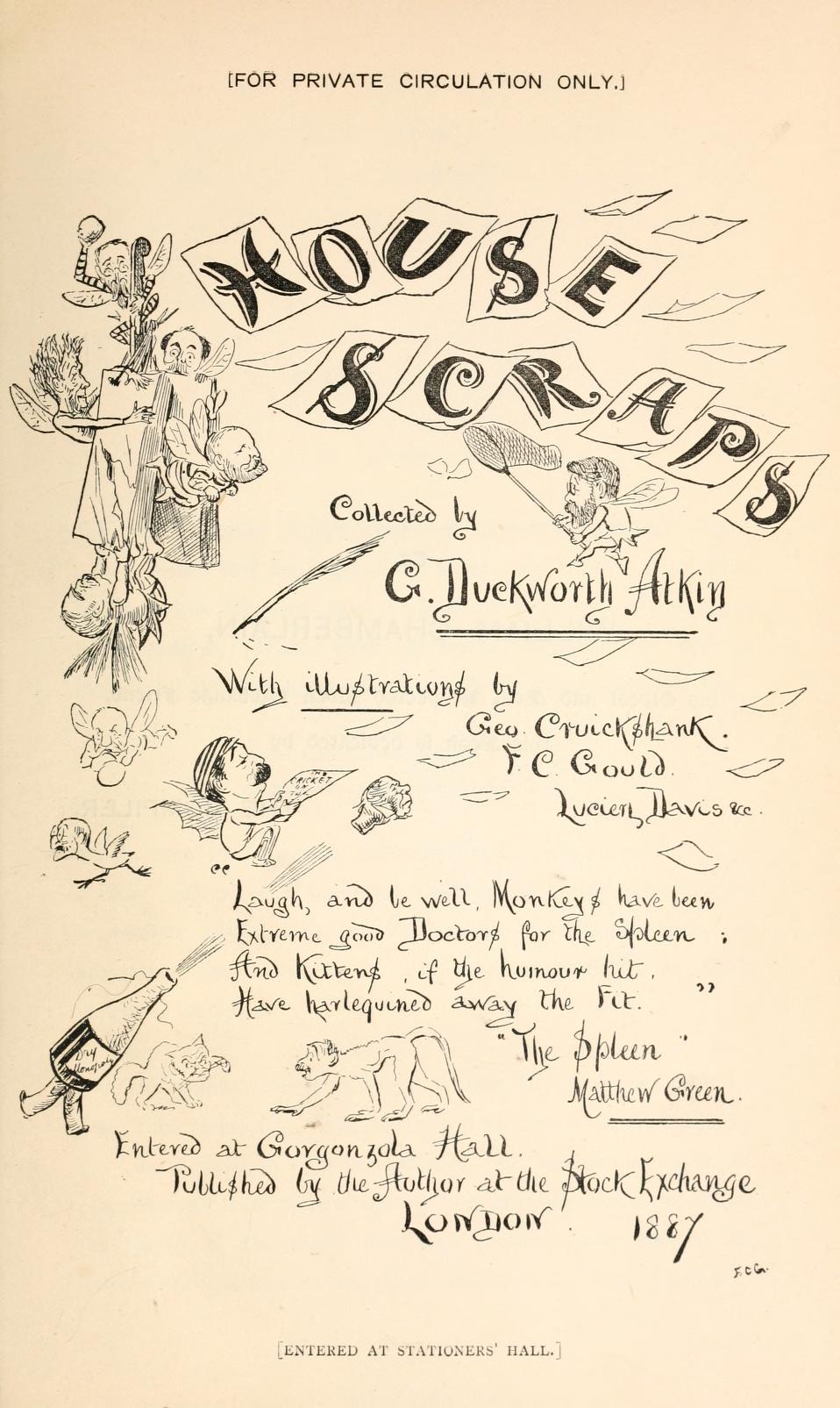 This is an absolutely hilarious account of stock exchange stories, jokes, and cartoons in the late 19th century. You will not regret flipping through this book, I can promise you that. Enjoy some of the examples below: 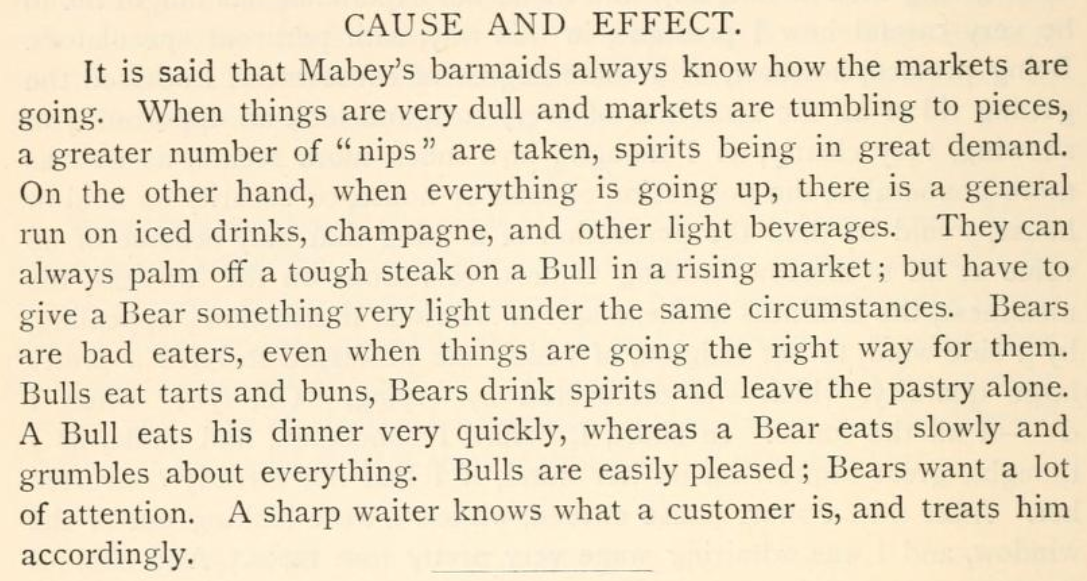 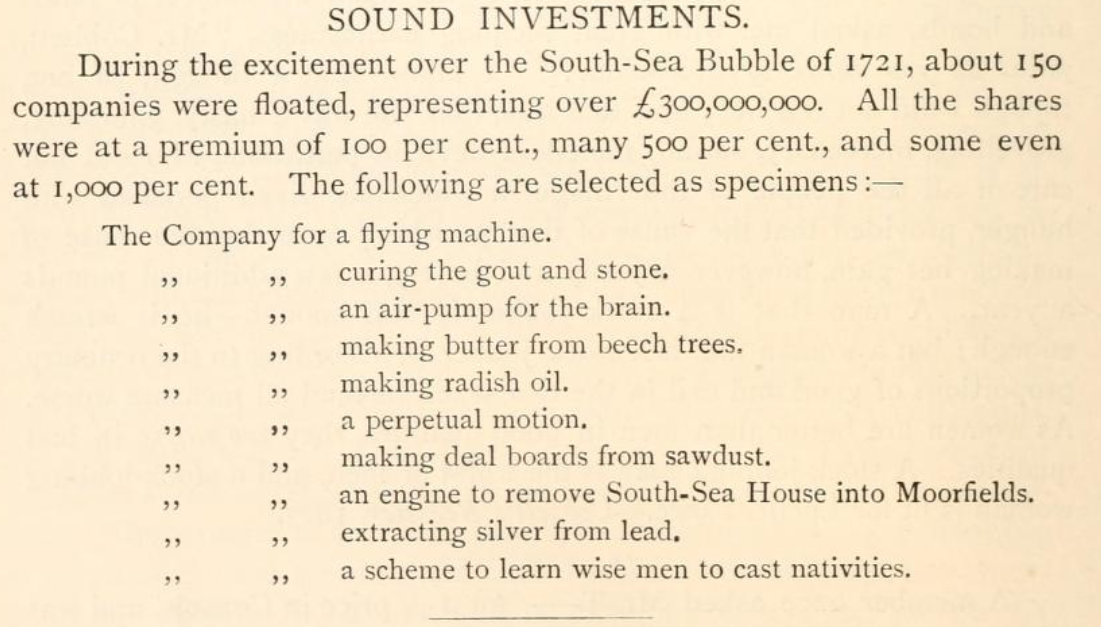 Independent Women: Shareholders in the Age of the Suffragettes 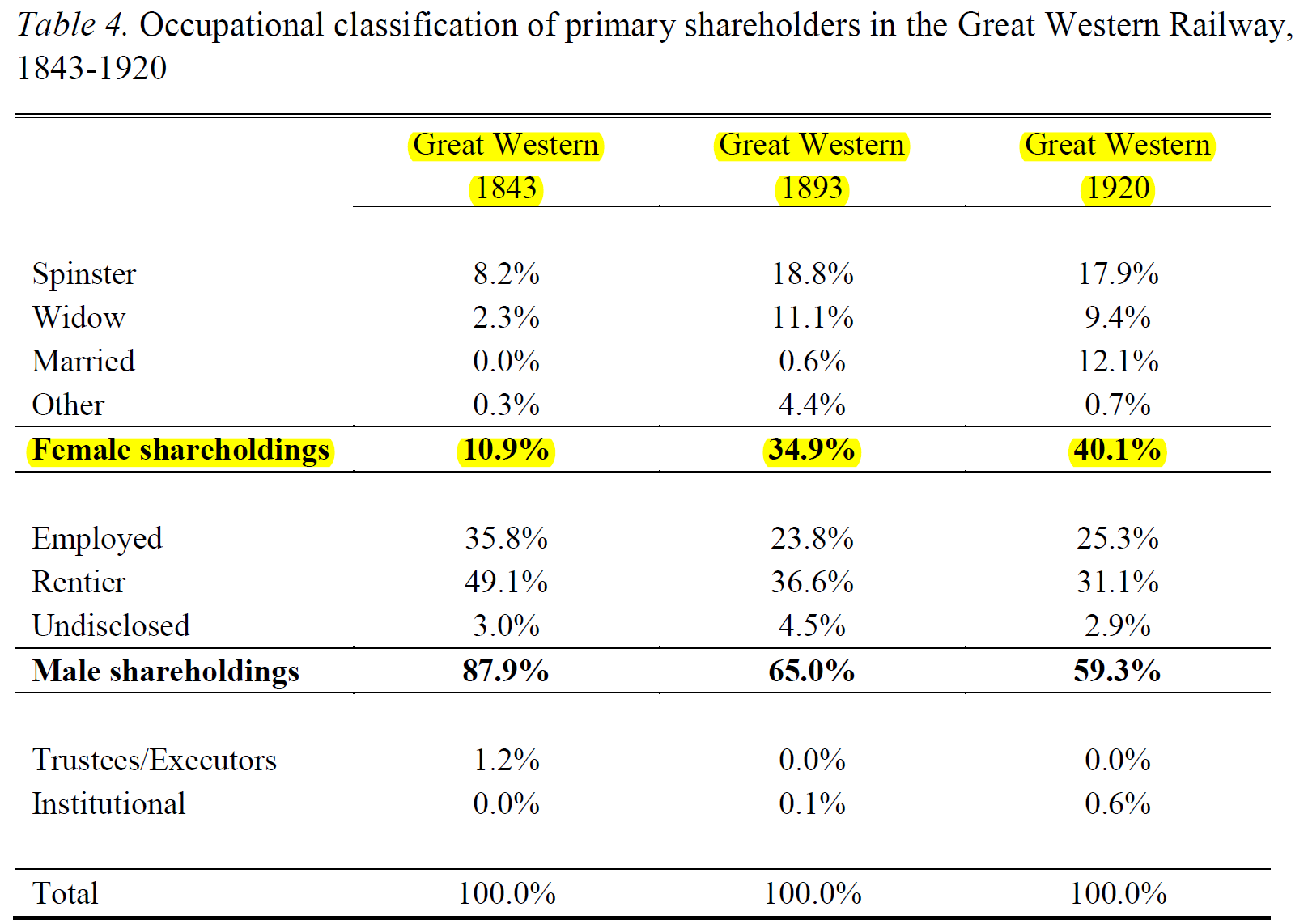 In the history of women’s rights and equality, the suffragette movement in the late 19th century Britain was a significant period, as the long over due legislation granting women the right to vote was passed in 1918. Yet, there was a similarly impressive and remarkable movement occurring in the stock market at the same time, as women became increasingly active participants in financial markets.

Just looking at the chart above, the percentage of female shareholders in Great Western Railway increased almost 4x from 1843 to 1920!

Additionally, this fascinating article demonstrates that women were more ‘active’, and made more independent investment decisions than their male counterparts. This is primarily exhibited through the concept of ‘joint shareholdings’, which were very common at the time.

In other words, women did not need to have their investment decisions ‘mansplained’ to them. While many at the time condescendingly presumed that a woman’s investments were dictated by a male figure, the data proves that the opposite is true. Rather than investing as a ‘joint shareholder’, women were more likely to invest on their own than men. When they did invest as joint shareholders, they were usually the ‘lead shareholder’, and invested with other women, not men. This is backed by the data in the table below:

It is particularly insane that prior to the Married Women’s Property Acts (MWPA) in 1870 / 1882, married women in Britain were:

“Prevented from  owning and controlling property due to the principle of coverture established in legislation… upon marriage, women were no longer recognized as a separate legal person and control of any assets brought into the marriage was passed to the husband. Women were permitted to retain ownership of personal items and freehold (real) property, although the husband was entitled to any income arising from real property…”

To be clear, women were not able to own or manage any of their own assets, and any financial gains generated from their real estate holdings were given to the husband.

“[However], the passage of the MWPA in 1870 allowed married women to retain ownership of any income earned through her own work or real property after the marriage… The MWPA had a significant impact on women’s investment decisions, resulting in enhanced participation in the stock market and altered portfolio allocations away from real estate and towards personal property held in the form of savings or investments in company stock.”

The MWPA facilitated a rise in female participation in the stock market by allowing women to manage assets and invest. In fact, there were a number of famous Suffragettes that were listed as shareholders in prominent railway companies.

This is a fascinating article on the investment prowess of women and Suffragettes in Victorian and Edwardian England. I highly encourage everyone to read it.

The End of Gatekeeping: Underwriters and the Quality of Sovereign Bond Markets, 1815-2007 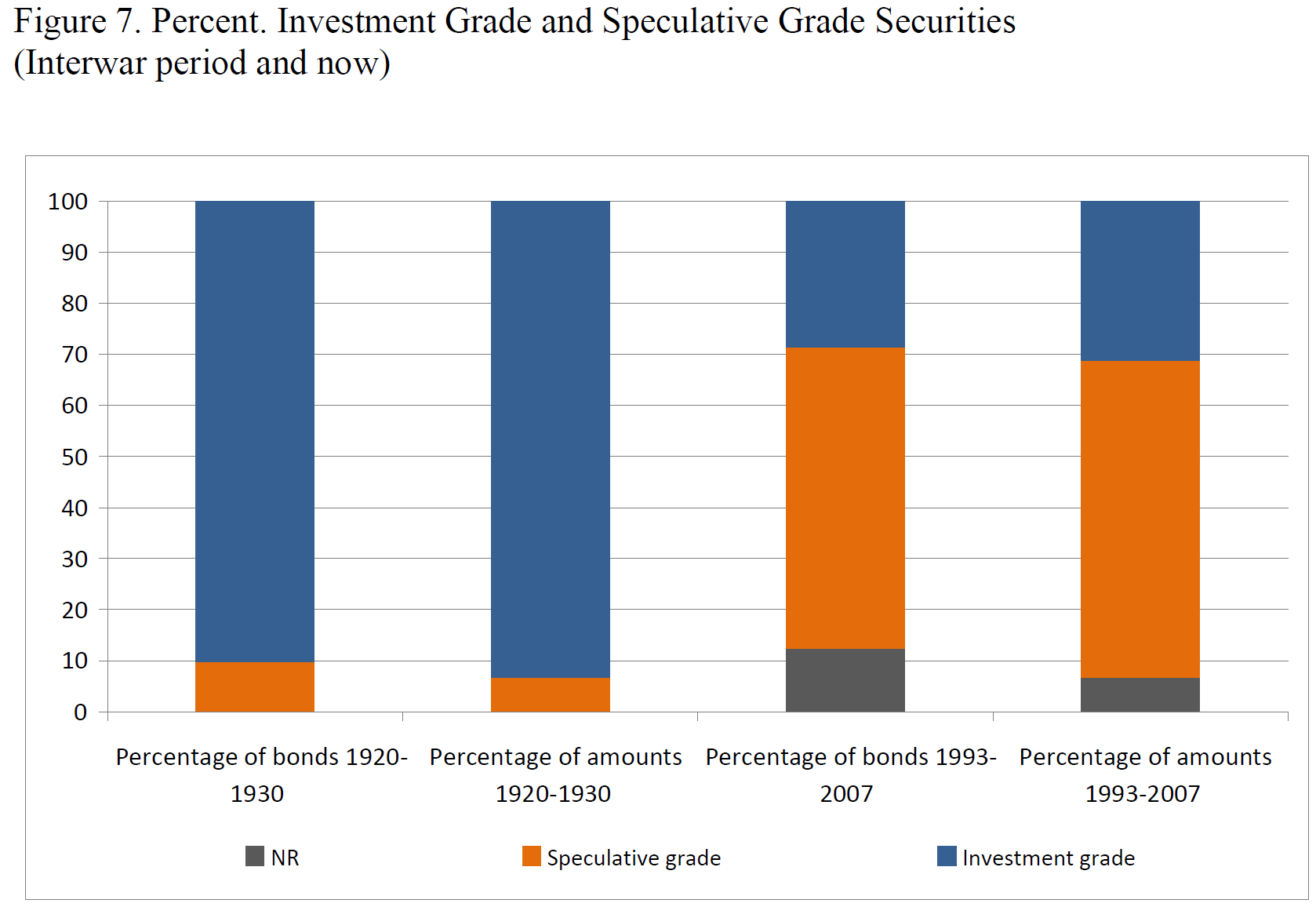 The role of underwriters today is vastly different than it was in the past. This thought provoking article explores the evolving duties of underwriters and rating agencies over time. Perhaps the best overview is found on page 3:

“In the past era (by which we mean the long-run period that began in the early 19th century and ended with the interwar crisis), underwriters provided valuable certification services. They tried to secure prestige by convincing investors that their name was associated with safer products. They did this not for the sake of honesty, altruism, or self-esteem but rather because doing so entailed benefits.

Today is different: underwriters have shed their role as certifiers and have outsourced it to rating agencies. The resulting reduction in liability risk also means that more competitive banks are prepared to issue riskier securities. We suggest that this new situation has given birth to a market for lemons, a market that did not exist in the past. We conclude that the next sovereign debt tsunami will crash on a foreign debt market that is by design more accident prone than its predecessors.”

This stark contrast in the roles of underwriters in each time period has led to what the authors call “the default puzzle”. This puzzle stems from the fact that underwriters used to have a vested interest in how the bonds they underwrote performed, as it could hurt or benefit their corporate brand. This meant that banks acting as underwriters were responsible for carrying out the roles of modern credit rating agencies. If a bank underwrote bonds that ended up defaulting, this would tarnish the bank’s reputation. Investors would ask “How could they fail to see the default risk before deciding to underwrite?”. 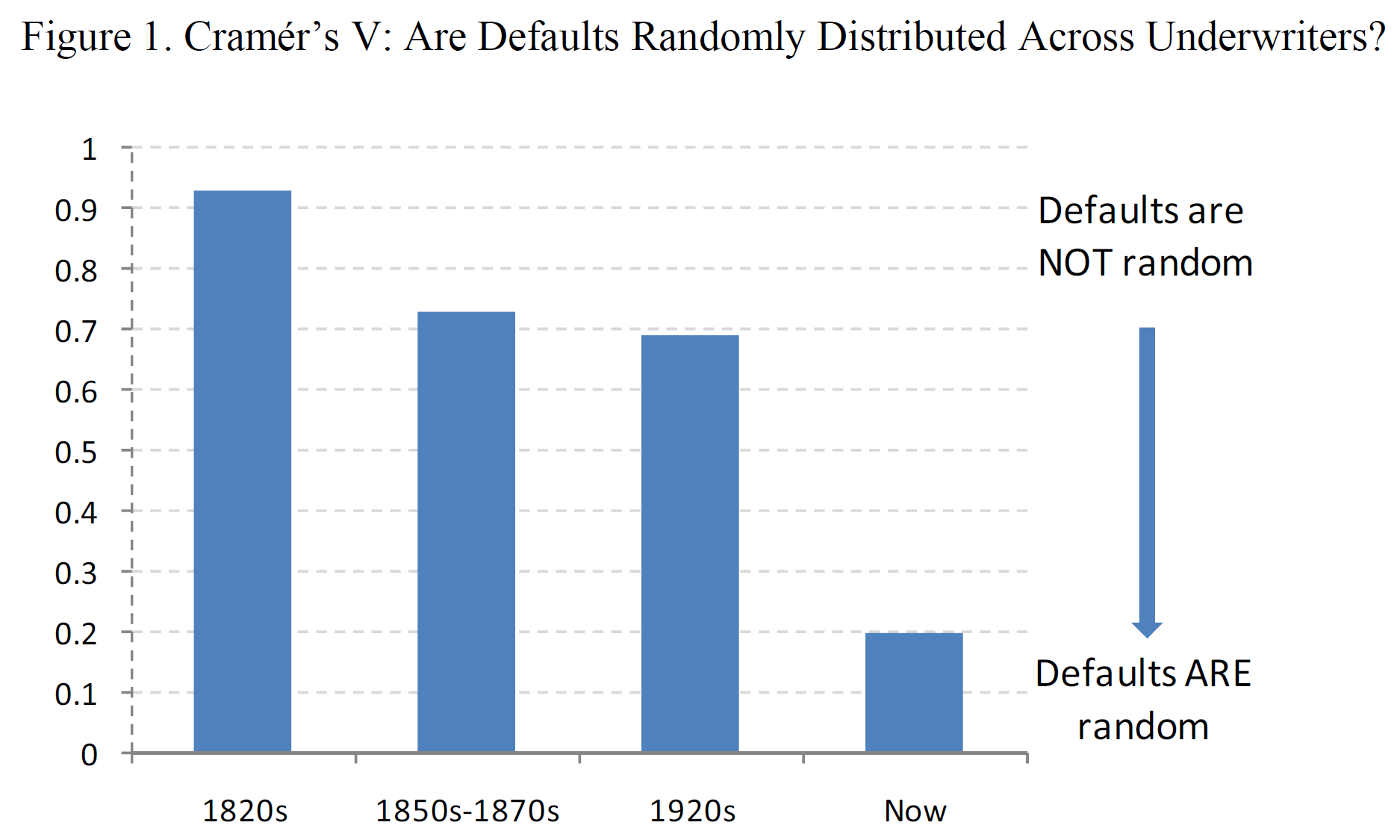 The result was a bond market in which very few ‘junk bonds’ were issued, as underwriters were wary of putting their reputations at stake. The defaults that occurred were generally clustered around the few financial intermediaries that were willing to underwrite the ‘junkier’ bonds, and take on the reputation risk.

BUT! As we all know, credit ratings changed everything.

“The investment banks that became involved in the new market probably welcomed the transformation (they included reincarnations of interwar New York leaders such as JP Morgan or National City Bank).  Fees were now smaller, of course, but liability risk was also reduced. Rating agencies would be the new lightning rod for accusations of financial malpractice. The banks, although undoubtedly informed, would now be able to show to unhappy customers the grades given by (possibly less informed) rating agencies.”

In essence, there’s no longer a need to worry about reputation risk attached to underwriting, because if anything goes wrong, it is the rating agency that is blamed. Consequently, there is now a booming “market for lemons.”

Stock Volatility and the Great Depression 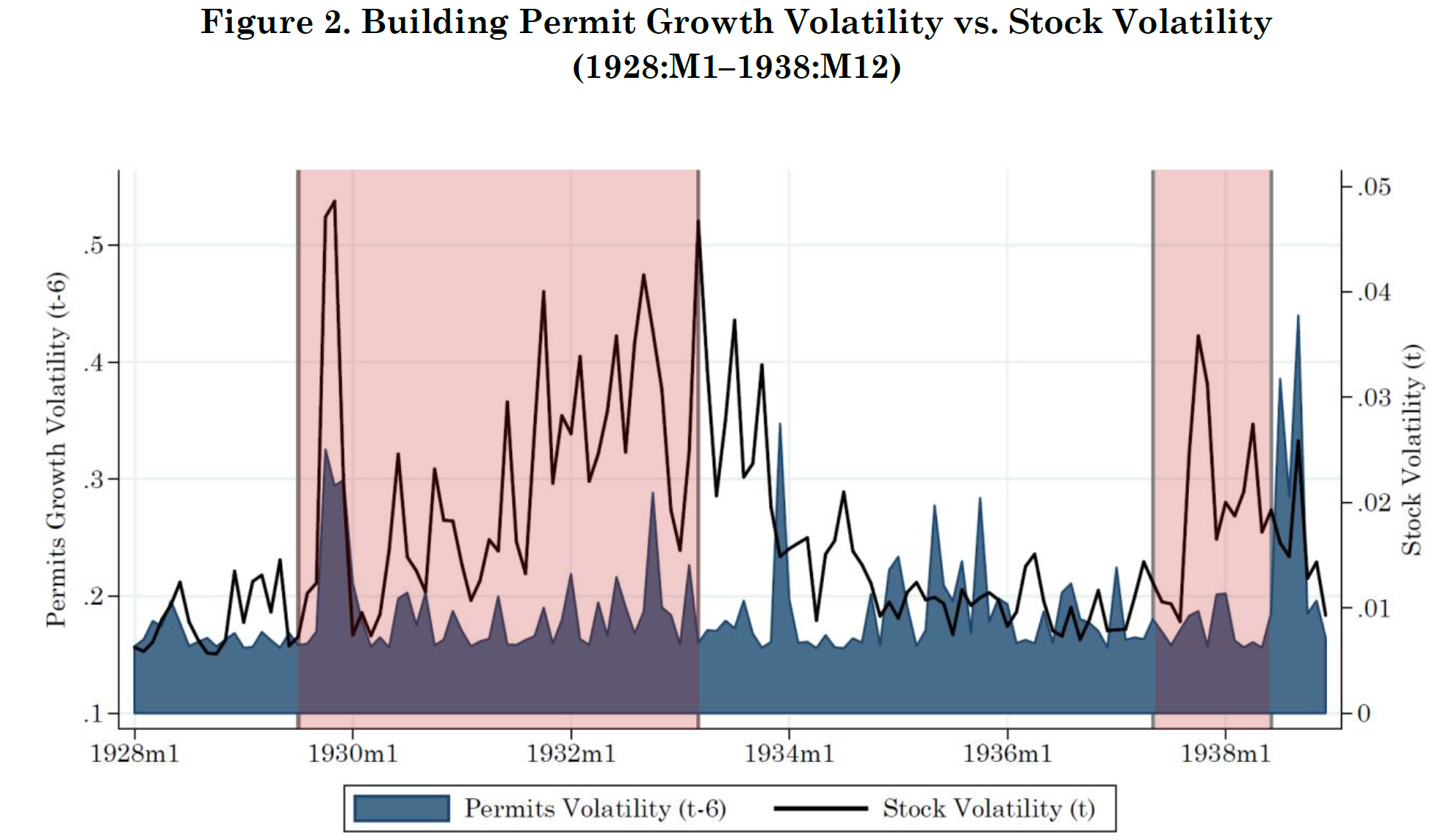 “The annualized standard deviation of US stock returns during the Great Depression reached as high as 60 percent per annum, two to three times higher than any other period in American financial history.”

There is no shortage of articles and books covering the Great Depression, and 1929 Crash. However, this article offers a new take on this monumental event in financial history: building permits.

“The large rise in the variability of stock returns led to a decline in the consumption of durable goods and played an important role in the onset of the Great Depression. We break new ground in studying the ‘volatility puzzle’ of the Great Depression by testing whether building permits can explain movements in stock volatility during the period 1928-1938. Our interest in building permits as a predictor of stock volatility is driven by a couple of factors.

First, a new wave of literature in economics has argued that the collapse of the housing and construction industries in the late 1920s and early 1930s played an important role in the onset and severity of the Great Depression. Second, building permits are well-known to academic and professional forecasters to be a forward looking indicator of aggregate economic activity. Therefore, we use the volatility of building permit growth as a growth option and a proxy for macroeconomic uncertainty during the Great Depression.“ 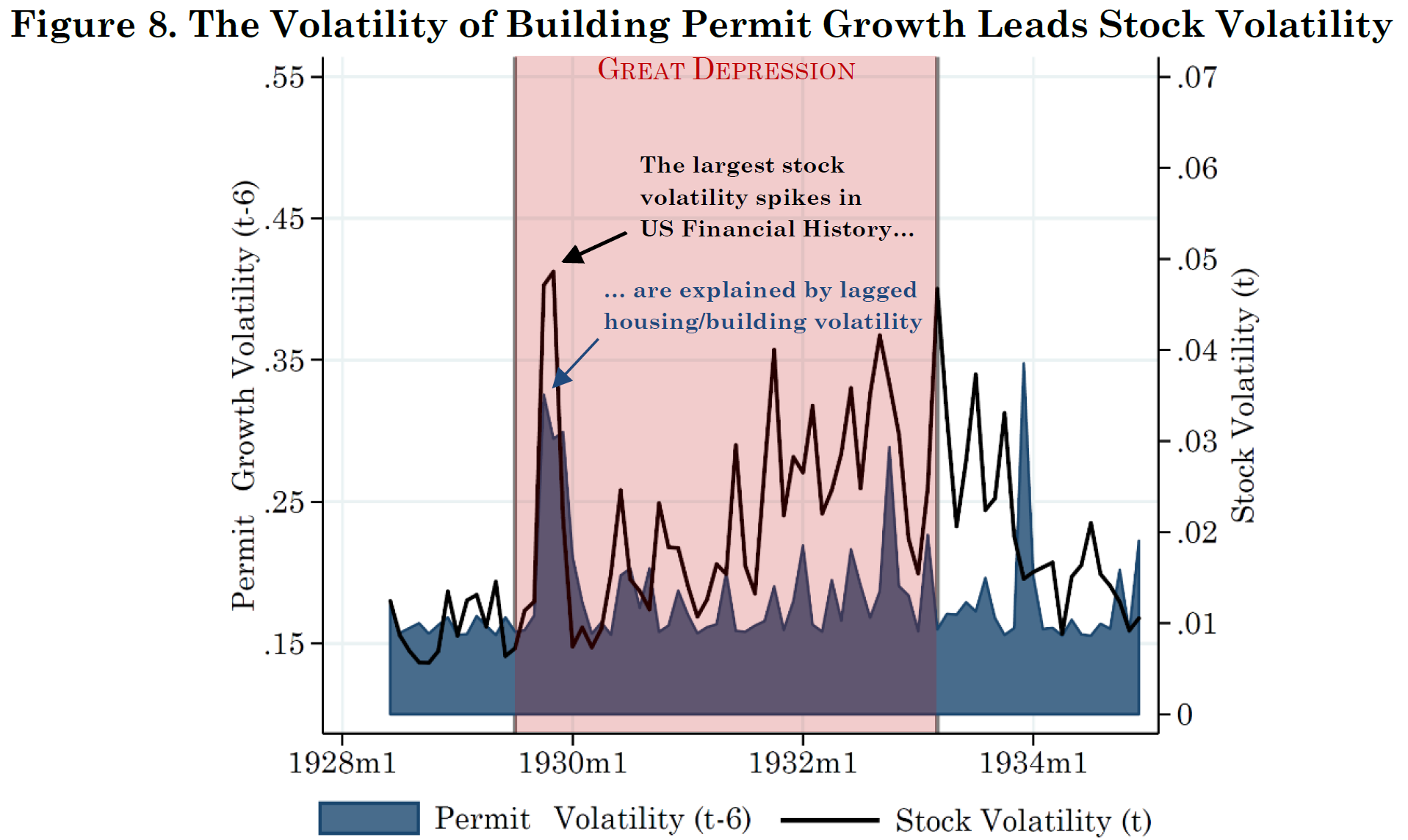 After making their case throughout the paper, the authors conclude by stating:

“Our analysis suggests that future research might test whether forward-looking economic measures such as building permits or housing starts have greater explanatory power for predicting stock volatility during a period of severe economic and financial stress.” 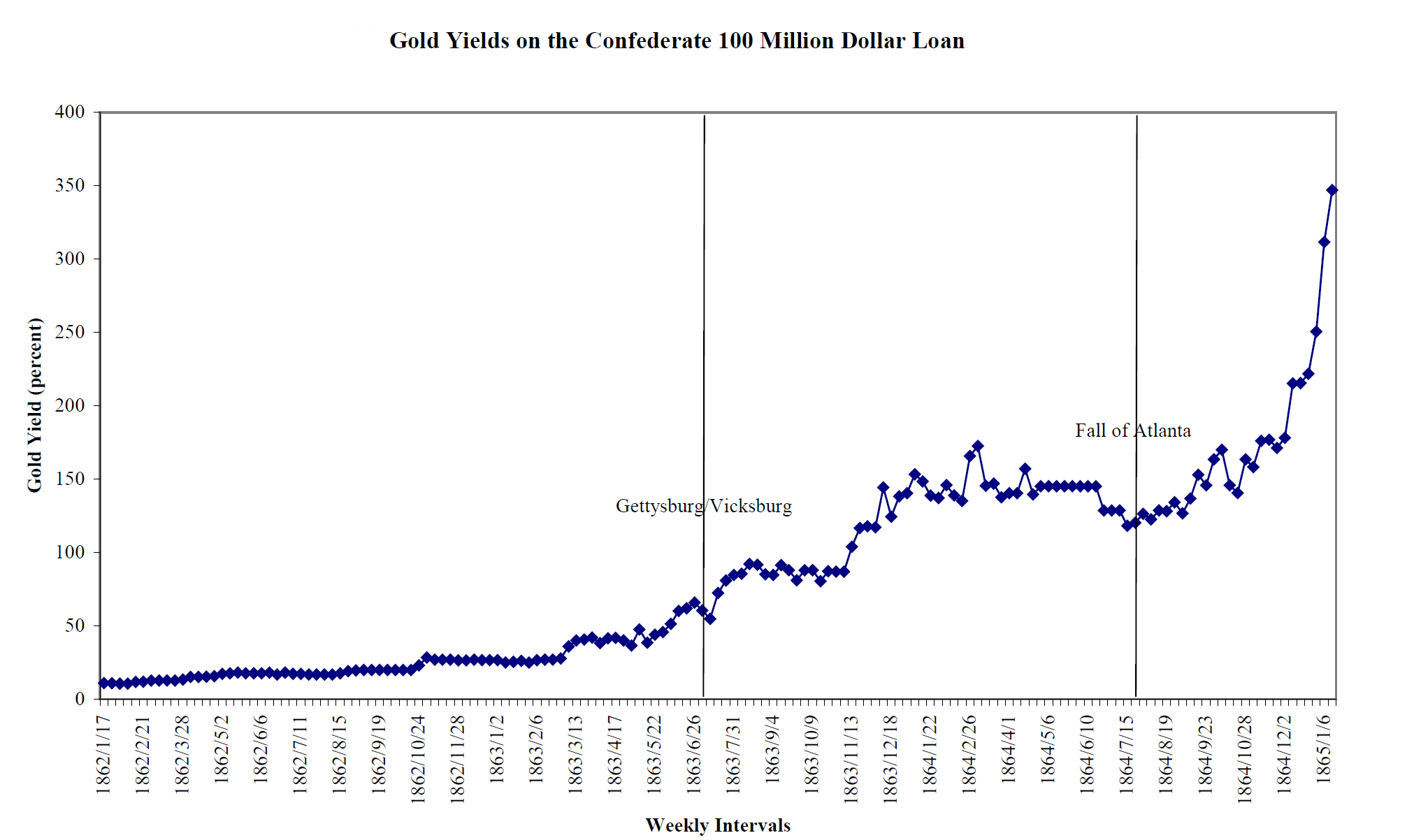 If one thing is clear throughout the thousands of wars that have occurred over the course of history, it’s that finance is a crucial component of any military conflict. While there are obviously exceptions to this rule, it’s a useful guiding principle that better financing equates to better military outcomes. Bearing that in mind, this article dives into the monetary policies of the Confederacy in 19th century America. At a high level:

“The [Confederate government’s] reforms may have channeled inflationary pressures into commodity markets and that an examination of both asset and commodity markets is needed in order to assess the effectiveness of Confederate monetary policy. Just as Bernanke and Gertler criticize the Bank of Japan for focusing on asset price inflation at the expense of the general price level in the 1989-1997 period, so too may Confederate monetary policy have been directed too much towards stabilizing asset markets with less favorable consequences for the prices of other goods and services.”

However, this tactic did not play out according to plan. Instead of trading above par, the bonds generally traded below par, making it unattractive for noteholders to convert their notes to the 8% government bonds.

“In an attempt to induce – and ultimately force – early conversion of money into bonds the government instituted three funding acts that limited the time period over which Treasury notes could be exchanged for the higher yielding 8% bonds. After the deadline, these notes could only be exchanged for lower yielding bonds – or in some cases would no longer be convertible at all.”

This plan temporarily achieved its goal, as the bonds traded above par, but led to unintended consequences as the currency rapidly depreciated, and commodity prices soared.  In 1864, at the end of the war, the Confederate Treasury Secretary stated:

“Unless a uniform and stable value can be given to the treasury notes, the effort to carry on the war through their instrumentality, must of necessity be abandoned.”

In just the next year, “the Confederate currency was rendered essentially worthless with the surrenders of General Lee and General Johnston in April 1865.”

While ESG may be a relatively new phenomenon in its modern form, the history of sustaninable banking stretches back to medieval Italy. The Italian super banks of the day had a focus on empowering communities, and not merely acting as a source of credit for any Italian citizen. In fact, many of the guiding principles that they practiced now appear in modern bank’s sustainability statements!