By Jamie Catherwood November 3, 2019 No Comments 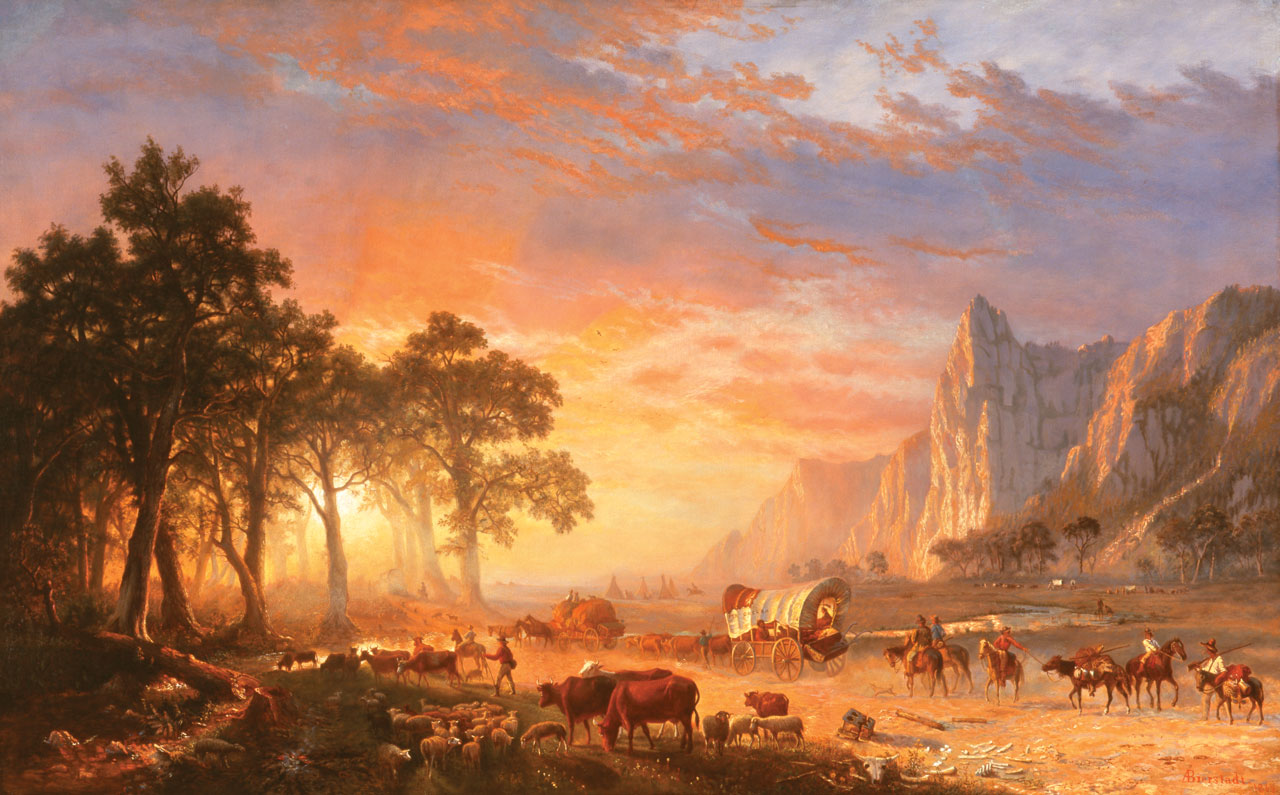 More and more we are hearing about how certain political outcomes will affect financial markets. Well, the above chart from this article demonstrates that this is nothing new. People have been speculating on the outcomes of elections for centuries! 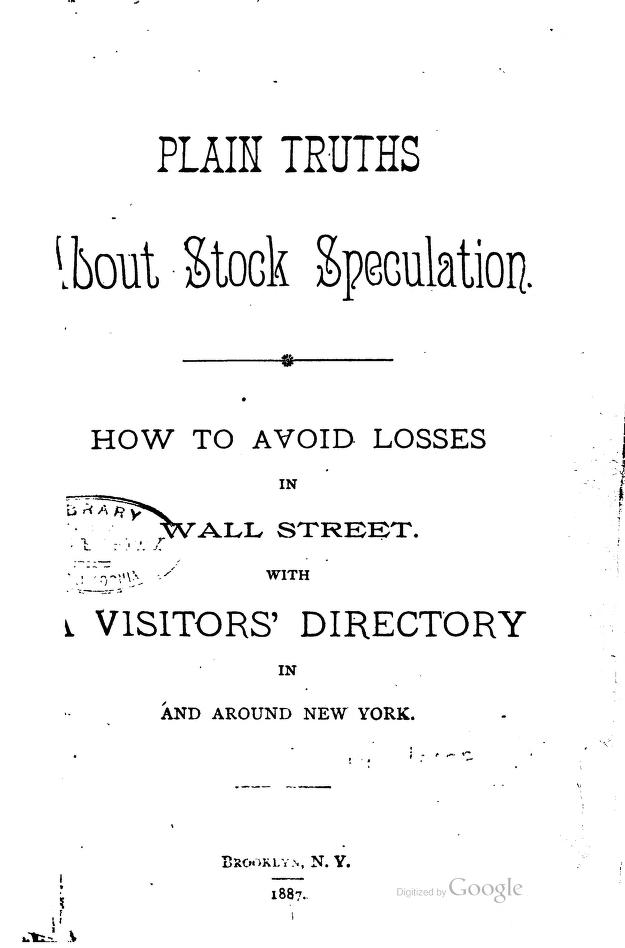 This book serves as a guide for avoiding losses in Wall Street in 1887. Check out this chapter for a particularly interesting read on how the stock market is a “game of chance”.

“Stocks are always dear to the outside public when prices are low and distrust prevails. If they are bound to speculate, this is the very time when they ought to buy for a ‘long pull.’ But they have no confidence and will not come in. When a great movement has been projected, and the bubble has become inflated near its utmost tension, then it is that stocks look cheap. People are imbued with the belief that the extent of the rise has no limit. They rush in to buy and are supplied by the insiders, who have planned for just such a consummation. The result is they get left… The saying, ‘A fool is born every minute’ is said to have originated with one of the most prominent operators in Wall street. Certain it is that a new crop of fools is always counted upon and seldom fails to respond to the allurements offered.” 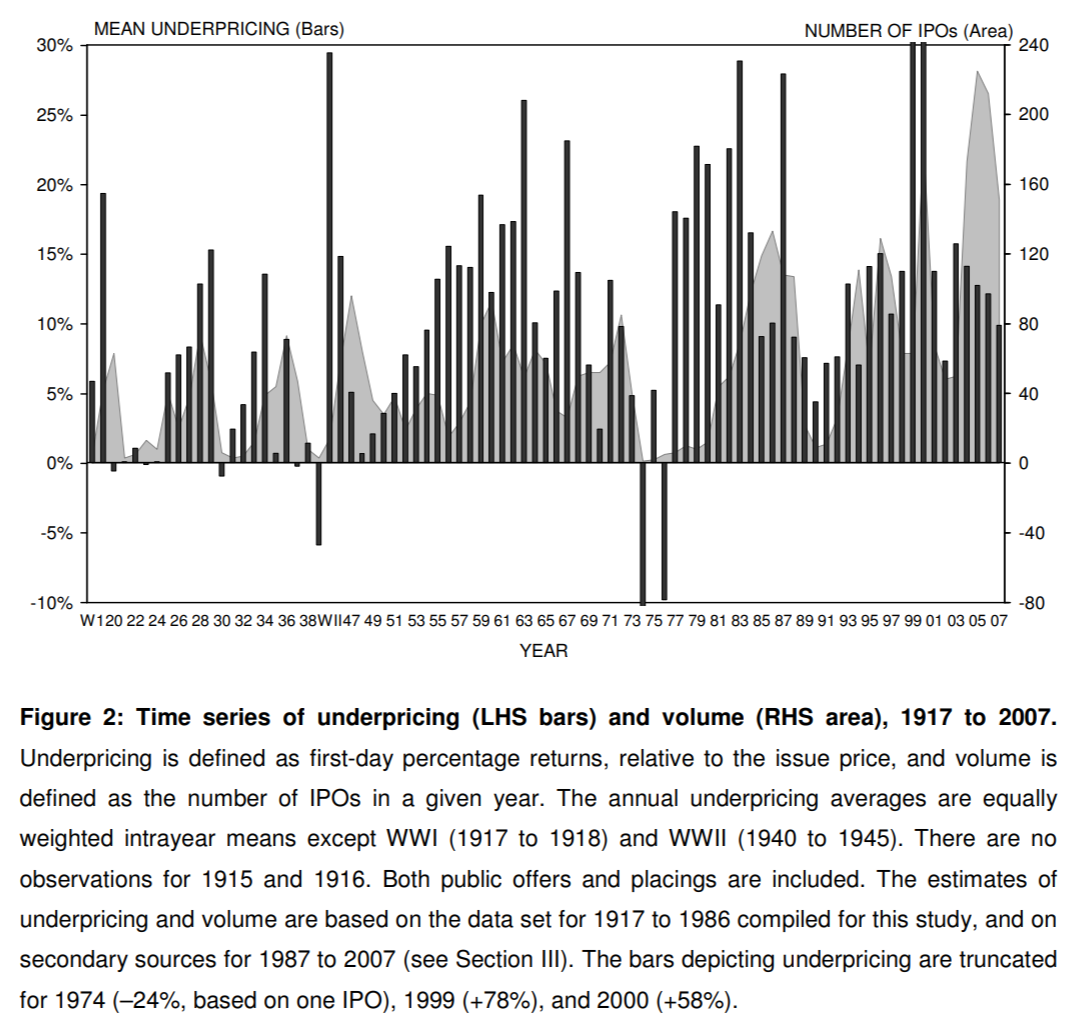 Arguments around underpricing IPOs is at the heart of the modern debate over Direct Listings vs. Traditional IPOs. As always, it’s good to consider these issues within historical context. That said, this paper analyzes the underpricing of IPOs since World War II, and argues:

“A central measure of the efficiency of the Initial Public Offering (IPO) market is the extent to which issues are underpriced. We present new and comprehensive evidence covering British IPOs since World War I. During the period from 1917 to 1945, public offers were underpriced by an average of only 3.80%, as compared to 9.15% in the period from 1946 to 1986, and even more after the U.K. stock market was deregulated in 1986. The post WWII rise in underpricing cannot be attributed to changes in firm composition, and occurred in spite of improvements in regulation, disclosure, and the prestige of IPO underwriters.”

Victory or Repudiation? The Probability of the Southern Confederacy Winning the Civil War 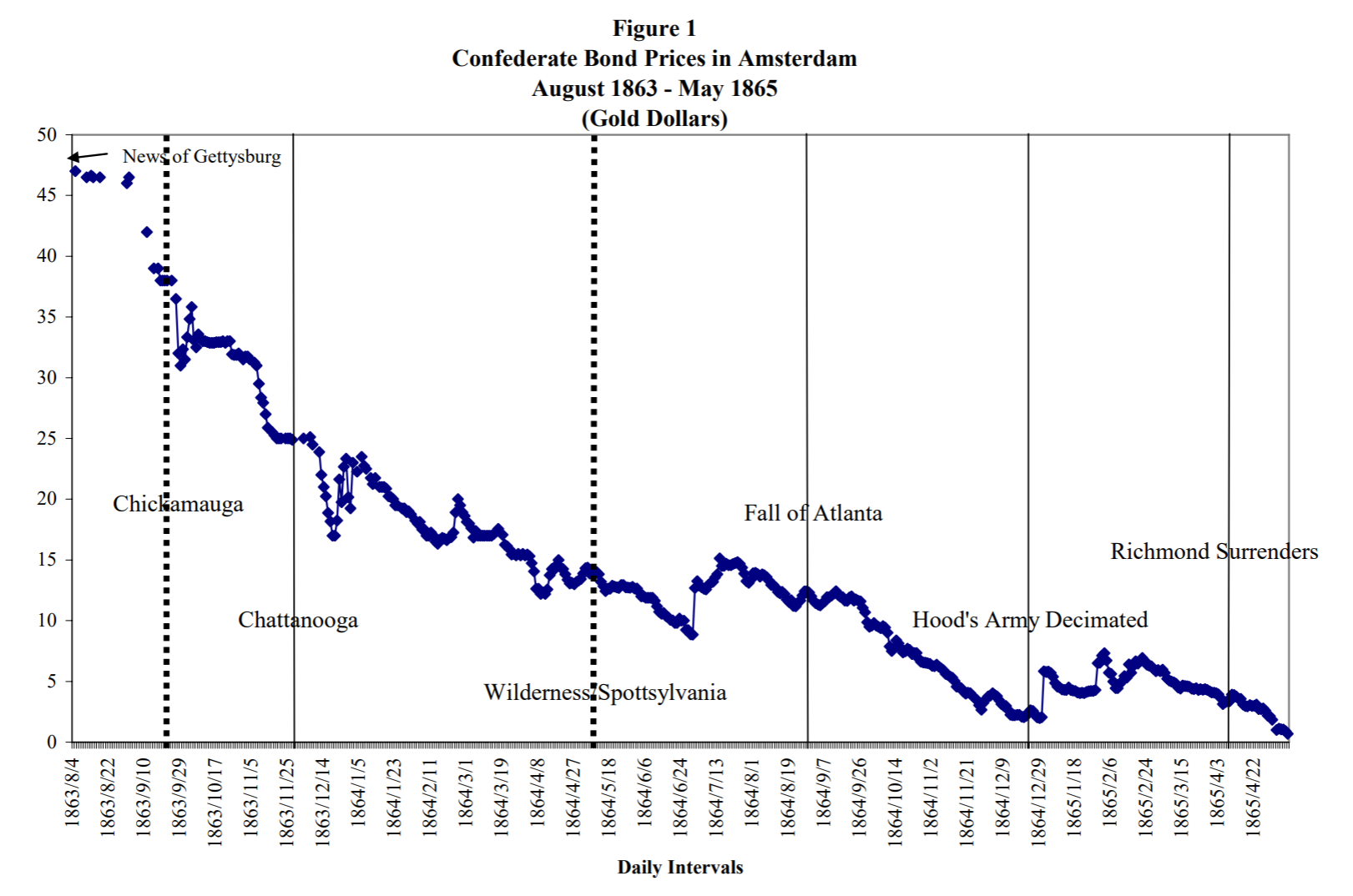 Throughout the history of man, there have been countless civil wars. Have you ever wondered how the role of speculation may have influenced the conflict? Were there speculators trading on the expected outcomes? Well, this brilliant article takes a look at the markets behind the U.S. Civil War in the 19th century:

“Historians have long wondered whether the Southern Confederacy had a realistic chance at winning the American Civil War. We provide some quantitative evidence on this question by introducing  a new methodology for estimating the probability of winning a civil war or revolution based on decisions in financial markets. Using a unique dataset of Confederate gold bonds in Amsterdam, we apply this methodology to estimate the probability of a Southern victory from the summer of 1863 until the end of the war. Our results suggest that European investors gave the Confederacy approximately a 42 percent chance of victory prior to the battle of Gettysburg/Vicksburg. News of the severity of the two rebel defeats led to a sell-off in Confederate bonds. By the end of 1863, the probability of a Southern victory fell to about 15 percent. Confederate victory prospects generally decreased for the remainder of the war. The analysis also suggests that McClellan’s possible election as U.S. President on a peace party platform as well as Confederate military victories in 1864 did little to reverse the market’s assessment that the South would probably lose the Civil War.” 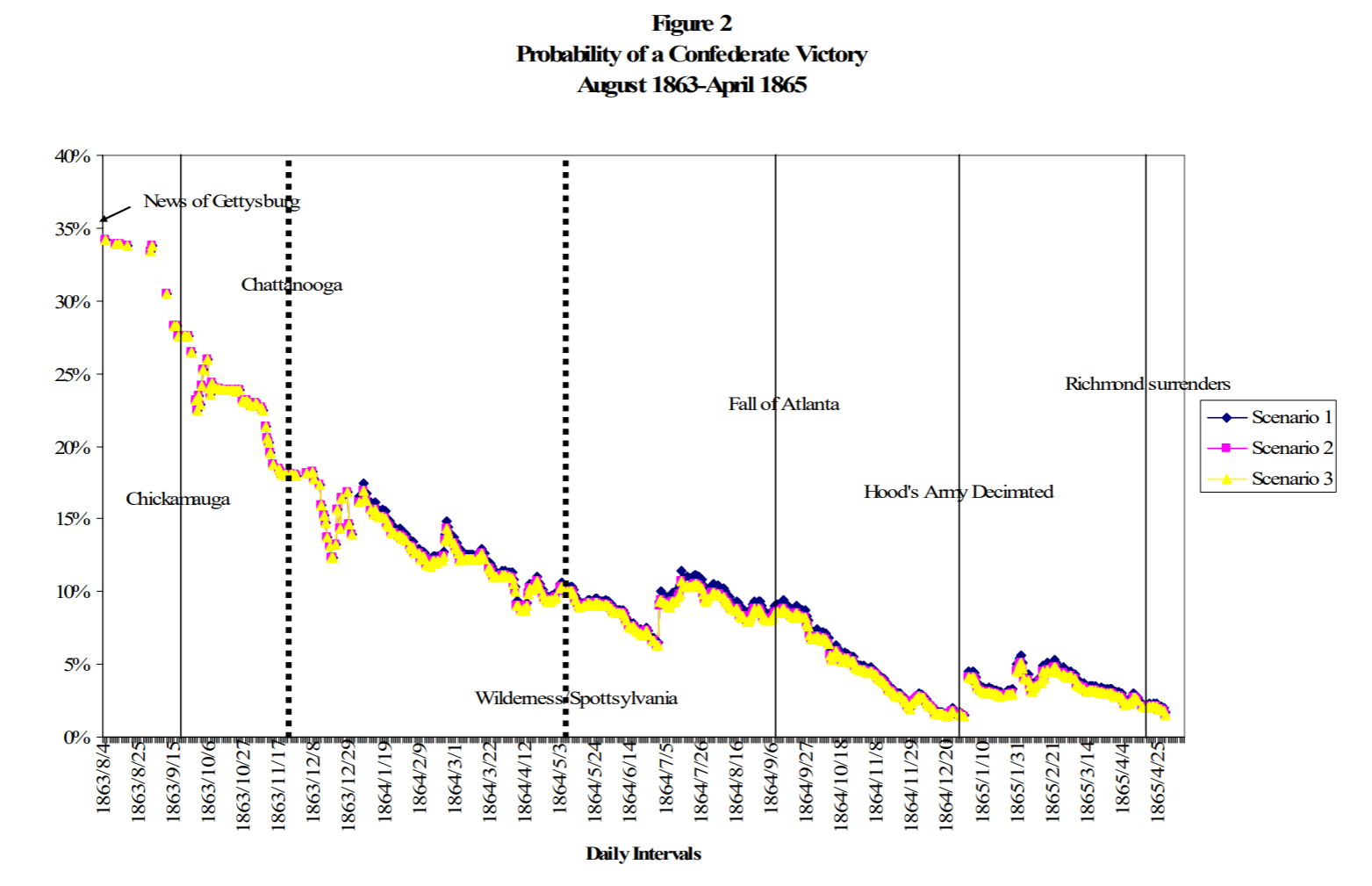 Read the excerpt from this brilliant article, and pause to think “what does this sound like?”:

“The paper shows that the price of the paintings viewed as ‘degenerate’ by the Nazis mimicked those of the art market in general and this up till June 1944 when their price increases once more whereas the general index decreases slightly.”

Value investing, anyone? Well, this article dives into a value investing opportunity in Nazi occupied France, as the works of art that Hitler considered “degenerate” could be purchased for cents on the dollar. Crucially, however, some of these works of art were by world class painters. The author’s research demonstrates that these “degenerate” pieces actually outperformed. 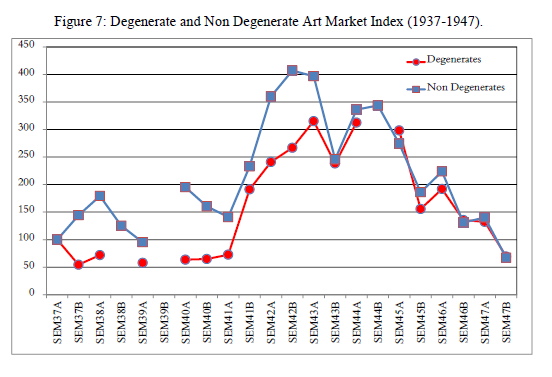 I wrote about this opportunity here:

“An investor’s opinion of a company does not change its intrinsic value, yet many seem to think that the opposite is true. If you believe that van Gogh’s paintings are hideous, though, do they become any less valuable on the art market?”

How to Speculate According to the ‘Merchant Principle’

Perhaps this is just my inner history nerd, but what I found most fascinating about financial history is the fact that for hundreds of years, there have been investors analyzing companies just as we do today. They were regular people, just like us, and in 300 years, people will look back at us the same way we do about 18th century investors. Well, consider this interesting breakdown of a commodity investor’s investment strategy in the 18th century:

“All merchants or others who are accustomed to speculate in any commodity always take the price this commodity has been for many different years & putting them all together, see what the mean price is, or as they call it the average price – & whenever the commodity they mean to speculate in can be bought under their average price, they think they may safely engage, as they have reason to suppose it will rise in order to come up to its usual price.”

This is an excellent look into the mindset of traders and speculators in the 18th century. How will people reflect on our current strategies in 300 years?

Learning to Love Investment Bubbles: What if Sir Isaac Newton had been a Trend follower?

I can assure you that you’ve probably never considered this… what if Isaac Newton was a trend follower? Luckily for you, our friend Meb Faber analyzed this so that we don’t have to: 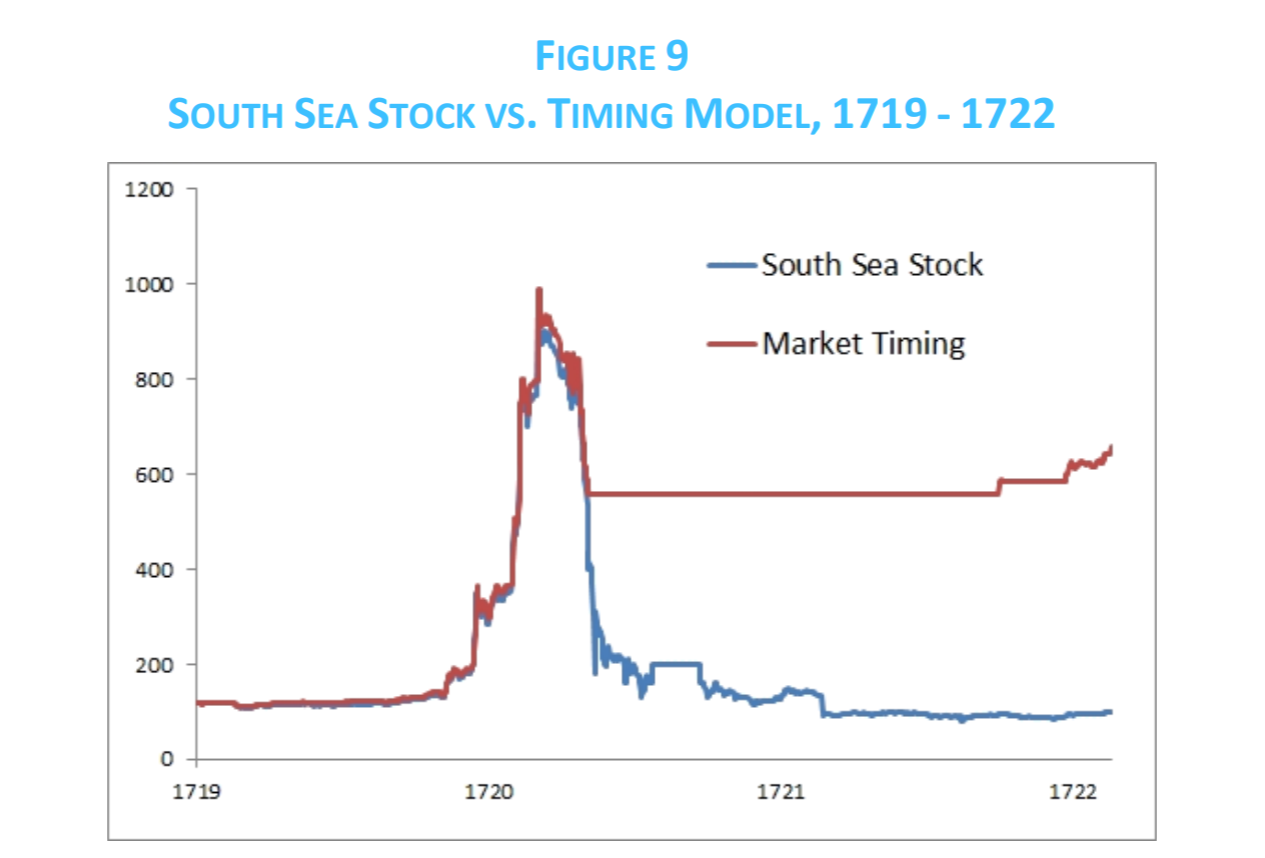 “The savvy trend follower in South Sea Stock would have performed much better. Although the trend following approach would have resulted in a nasty 44% drawdown, the strategy would have produced a large overall profit and the investor would have quadrupled his money to speculate another day. All that really matters is surviving to invest another day. You may not acutely notice the difference between an 8% and 10% return, but you will certainly notice the difference between a 40% and 90% loss.”