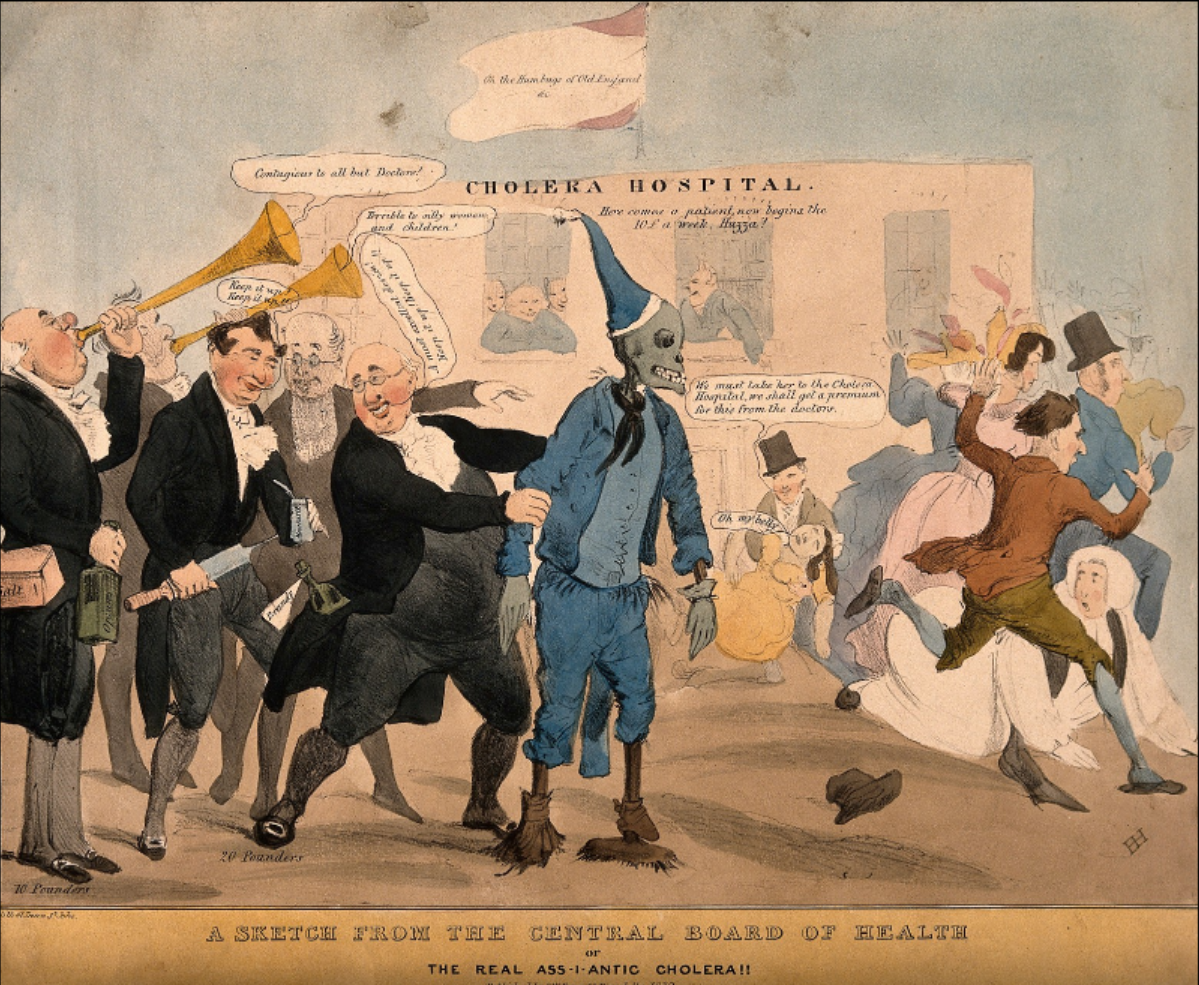 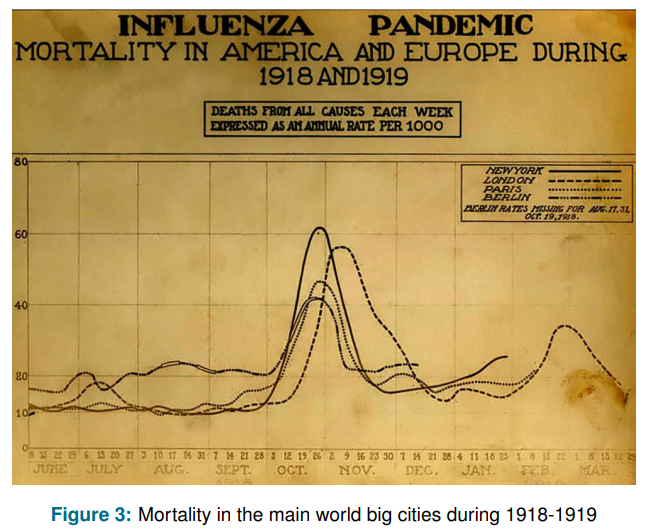 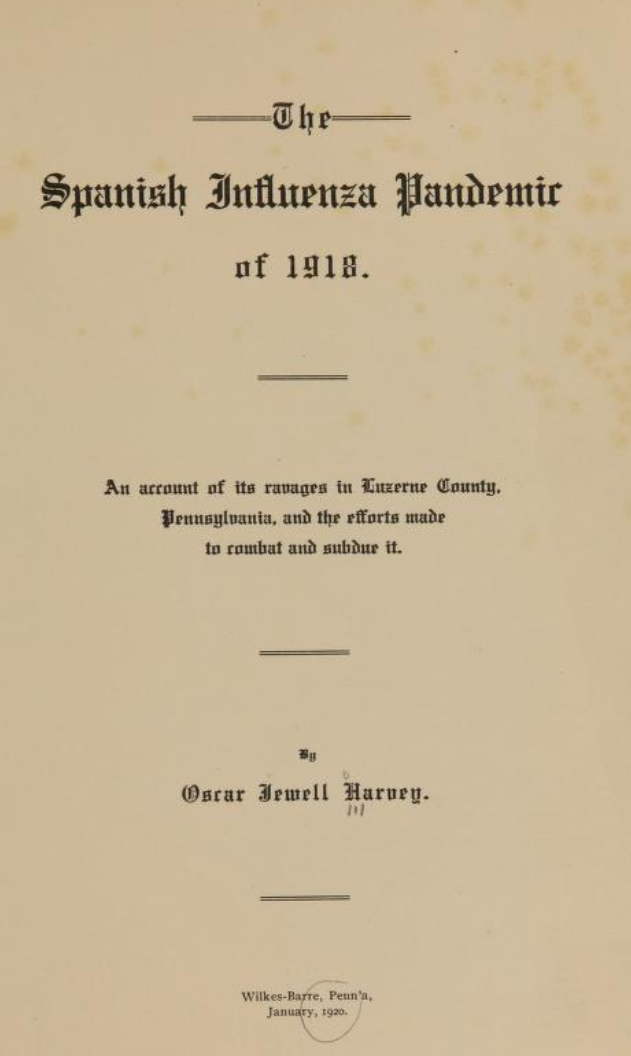 The Spanish Influenza Pandemic of 1918

Before reading this week’s archival book, think about what it’d be like to experience the Spanish Influenza. At least 50 million people were killed by the disease, and roughly one-third of the global population contracted it. Imagine how something like this would have torn through your community. I think this mindset is crucial for reading this week’s source: “The Spanish Influenza Pandemic of 1918 : An Account of its Ravages in Luzerne County, Pennsylvania, and the Efforts Made to Combat and Subdue It”. Written in 1920, this is a very real account of how the pandemic ravaged one county in Pennsylvania. The opening paragraph is chilling:

“Early in September, 1918, the United States was invaded by a scourge of highly infectious and fatal disease, which spread with rapidity throughout the country. It was pandemic in its nature, and partook of many of the characteristics of influenza, grip and pneumonia. No one seemed to know much about the disease or its treatment, and medical science and public health agencies were alike unprepared to cope with it.”

“During the great plague of London, in 1665, the people listened with avidity to the predictions of quacks and fanatics.”

I can honestly say that since I started doing my financial history shtick online in June 2018,  I have never received so many questions and requests for historical context than I did with the coronavirus this week. It was this week that many Americans witnessed a previously distant and global problem become a serious concern at home as more cases of coronavirus in the United States were reported. In response, stocks tanked as investors panicked over how the global pandemic would impact markets and supply chains. 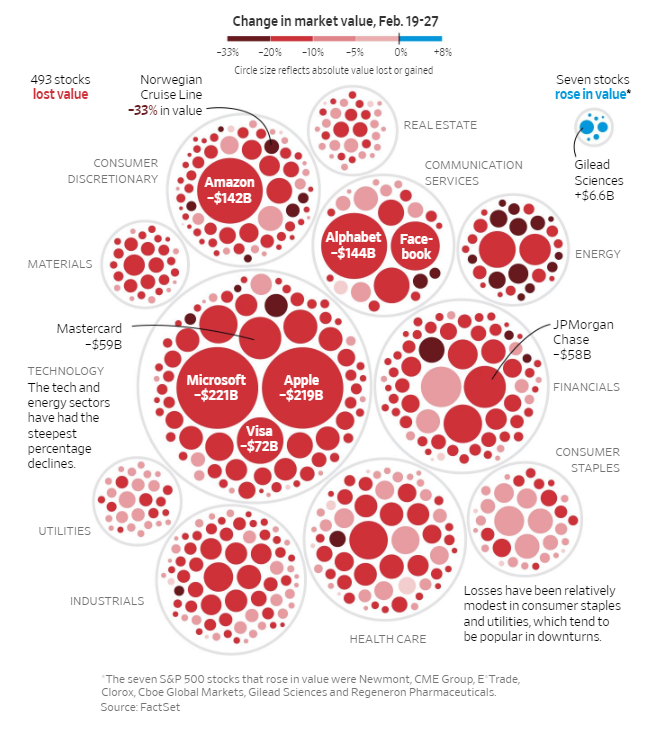 In the midst of the frenzy, investors even accidentally drove up the price of $ZOOM (a Beijing-based company with an $18 Million Market Cap) by some 50% as investors mistakenly thought they were purchasing the stock of Zoom Video Communications (Ticker: ZM), which many feel will benefit from an increase in remote work during this pandemic.

That said, this week we are going to cover past pandemics, the effect on markets, and crashes in general. Before diving in to the articles, however, I want to share some interesting findings that I came across in an 1892 edition of The Commercial & Financial Chronicle that wrote about how an outbreak of cholera effected markets. There are some eerily similar aspects to what was written in 1892, and today.

First, some background: The cholera outbreak in 1892 originated in Hamburg, Germany. Eventually, however, the problem made it’s way to America in the form of steamships coming to New York City via Hamburg (Morovia, Normannia, Rugia and the Stubbenhuk). When word spread that passengers on these ships had died of Cholera, and more might be infected, there was a national debate over how they should be treated and quarantined upon their arrival. With so much uncertainty over what the condition of passengers on these ships were before they arrived in New York’s harbor, many media outlets and bearish investors spread false or sensationalized reports on how deadly the ships’ arrival would be. In fact, many referred to the ship as the Asiatic Demon. You can get a sense for how ‘click baity’ these newspapers were in 1892 based on the headline below: 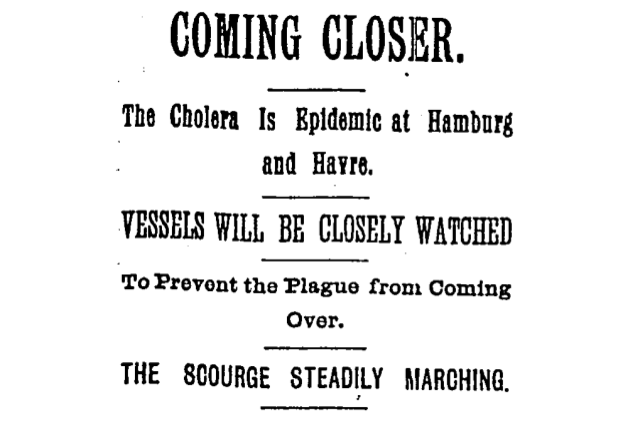 Many wanted the steamships to be turned away, similar to how cruise ships have been turned away from multiple ports over coronavirus fears in recent weeks. How did this fear impact markets, though? Writing on the arrival of one such steamship from Hamburg, the Commercial and Financial Chronicle stated: 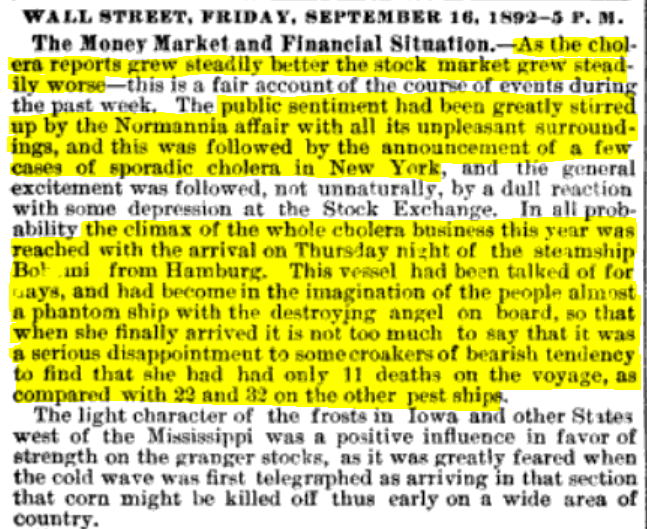 The following excerpts give a good idea of how cholera effected markets: 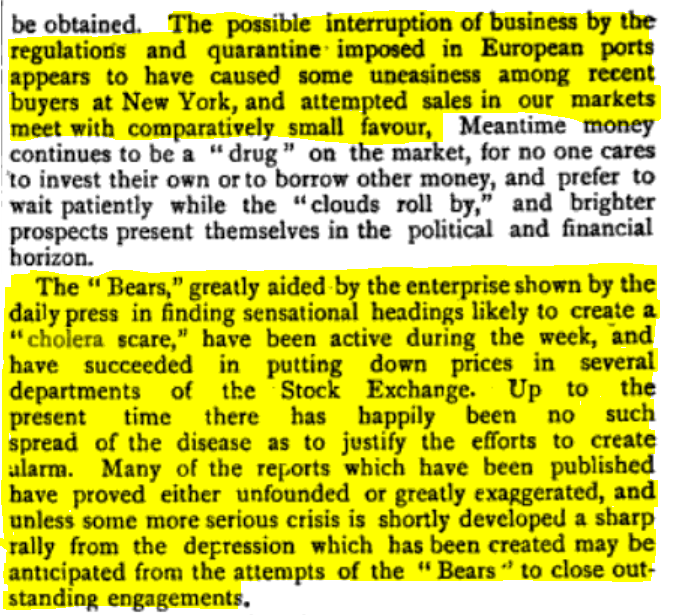 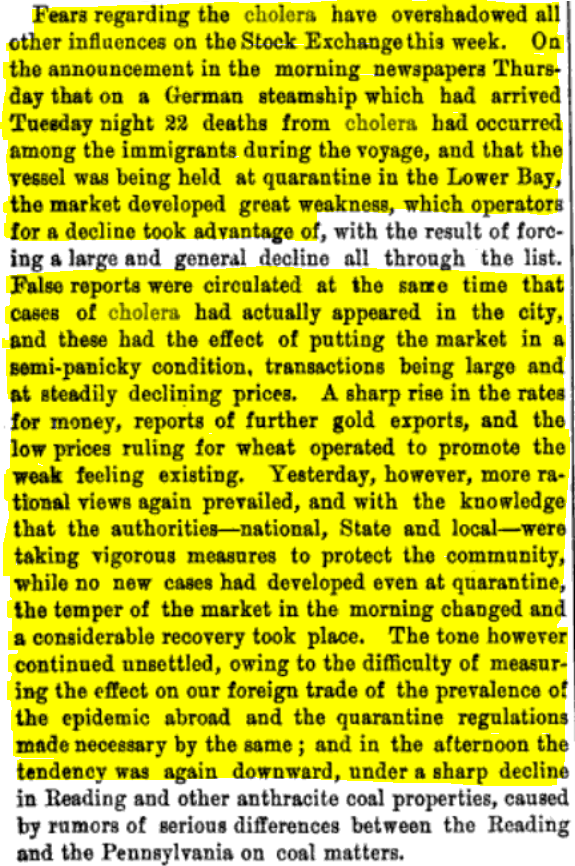 And just as we’ve seen today with a large number of companies, the disease began to show up in company’s reports as a reason for business declines: 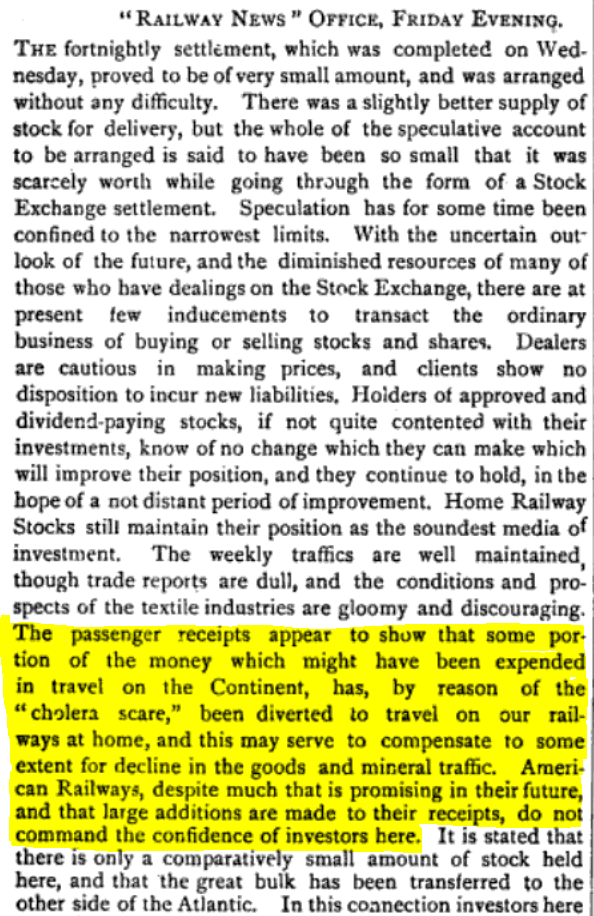 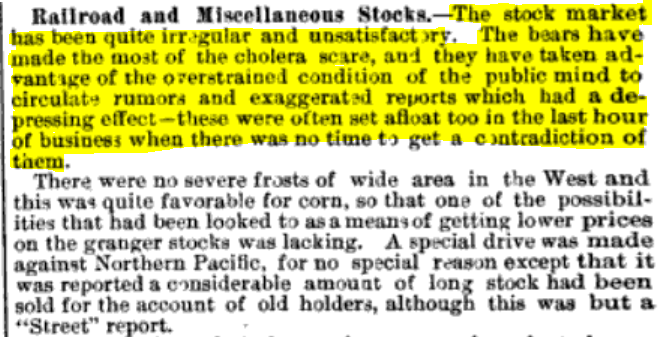 In the end, the widespread cholera crisis that everyone predicted to break out in New York did not come to be.

And now, let’s dive into this week’s links!

Before and After the Black Death: Money, Prices, and Wages in 14th Century England 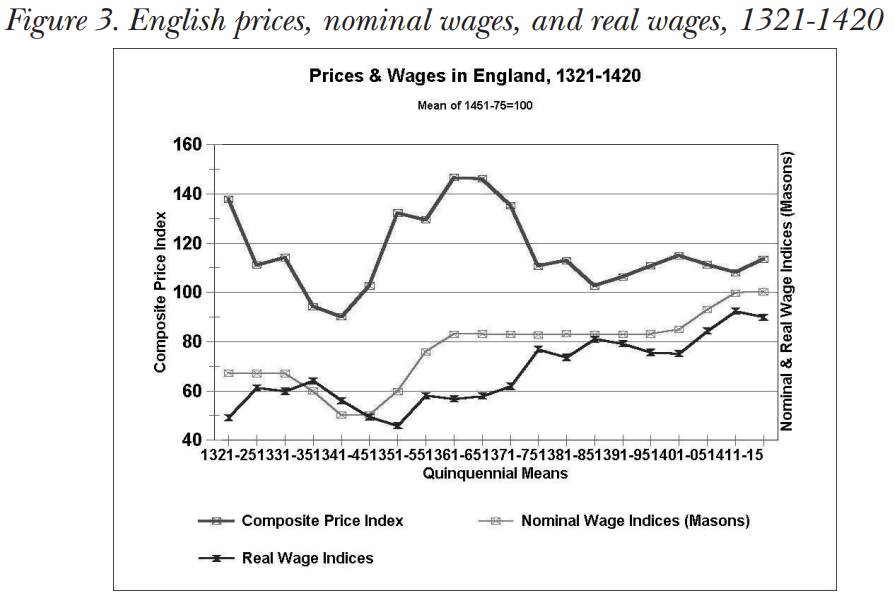 The Black Death is the OG pandemic, and had a profound impact on the medieval European economy. This article dives into how the bubonic plague affected wages, prices, and inflation.

“That the fourteenth century was one of the most violent centuries – before the twentieth, the most violent of all – is now a commonplace concept in European history. Less commonly understood, however, is the fact that this century also marked one of the most violent oscillations in monetary flows, prices, and wages, with two prolonged periods of inflation, each followed by prolonged deflations. Since an examination of all these oscillations for the entire fourteenth century is not feasible, with the space constraints imposed, this study will focus on those preceding and following the Black Death.” 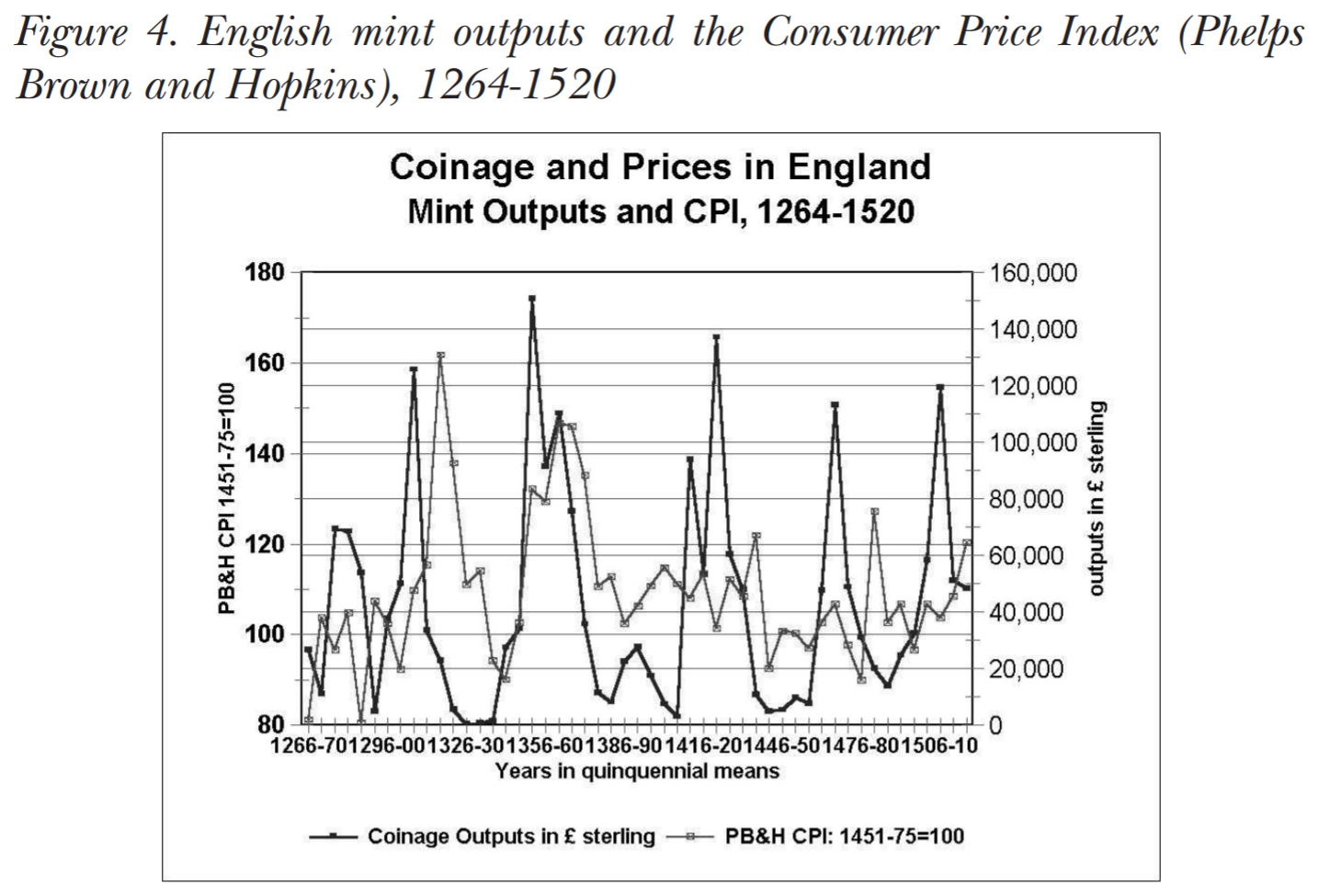 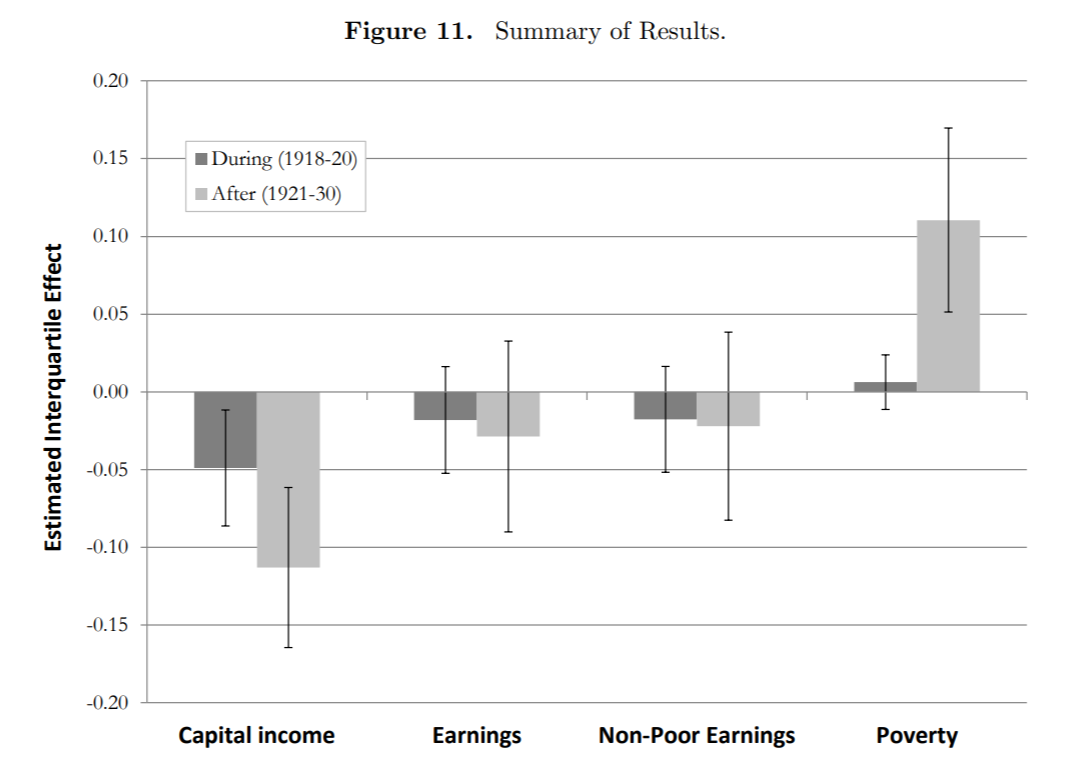 Ever since the outbreak of coronavirus, there have been comparisons to the Spanish Influenza of 1918, one of the deadliest pandemics in history. According to the CDC, “500 million people or one-third of the world’s population became infected with this virus. The number of deaths was estimated to be at least 50 million worldwide with about 675,000 occurring in the United States.”

While this article may not seem particularly relevant, because it only focuses on one country (Sweden), it is worth reading because it goes so deep in analyzing the effects of global pandemics on earnings, capital returns and poverty. In addition, Sweden is a fantastic case study because the data is not as distorted by the effects of World War I. While there will obviously be external impacts from nearby countries participating, the effects will be much more muted.

“Using difference-in-differences and high-quality administrative data from Sweden… We find that the pandemic led to a significant increase in poverty rates. There is also relatively strong evidence that capital returns were negatively affected by the pandemic. However, we find robust evidence that the influenza had no discernible effect on earnings. This finding is surprising since it goes against most previous empirical studies as well as theoretical predictions.” 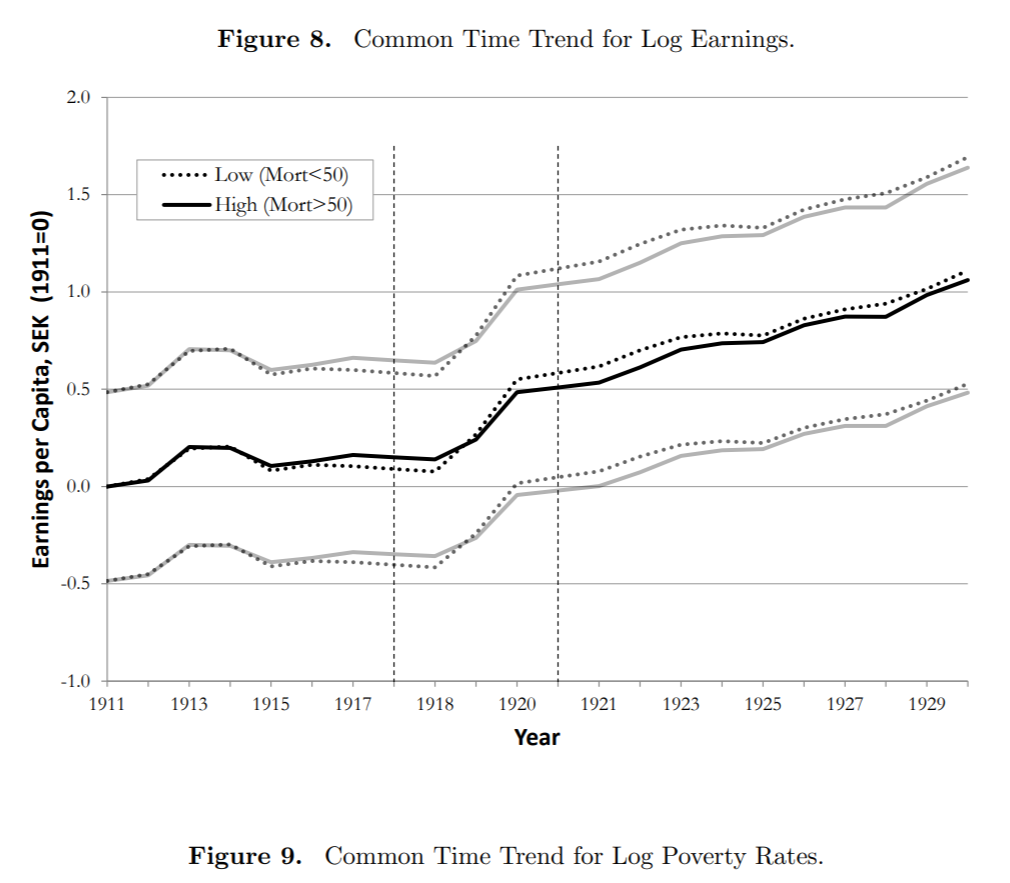 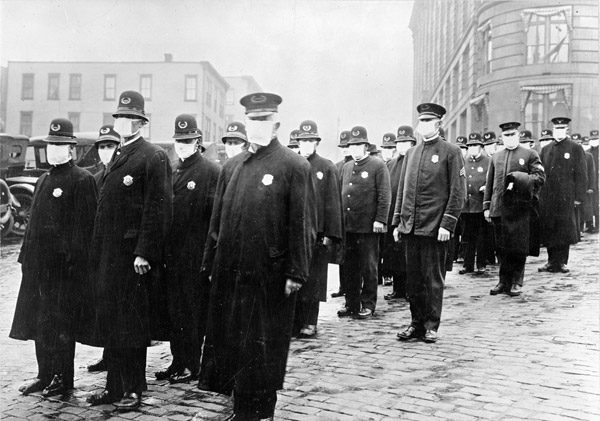 Policemen in Seattle wearing masks made by the Red Cross, during the influenza epidemic. December 1918.

For those seeking a more U.S. focused article on the impact of Spanish Influenza, this paper from the Federal Reserve Bank of St. Louis is for you. You should take the time to read the entire paper, but their research concludes:

“Most of the evidence indicates that the economic effects of the 1918 influenza pandemic were short-term. Many businesses, especially those in the service and entertainment industries, suffered double-digit losses in revenue. Other businesses that specialized in health care products experienced an increase in revenues. Some academic research suggests that the 1918 influenza pandemic caused a shortage of labor that resulted in higher wages (at least temporarily) for workers, though no reasonable argument can be made that this benefit outweighed the costs from the tremendous loss of life and overall economic activity. Research also suggests that the 1918 influenza caused reductions in human capital for those individuals in utero during the pandemic, therefore having implications for economic activity occurring decades after the pandemic.”

However, some states were hit much harder than others: 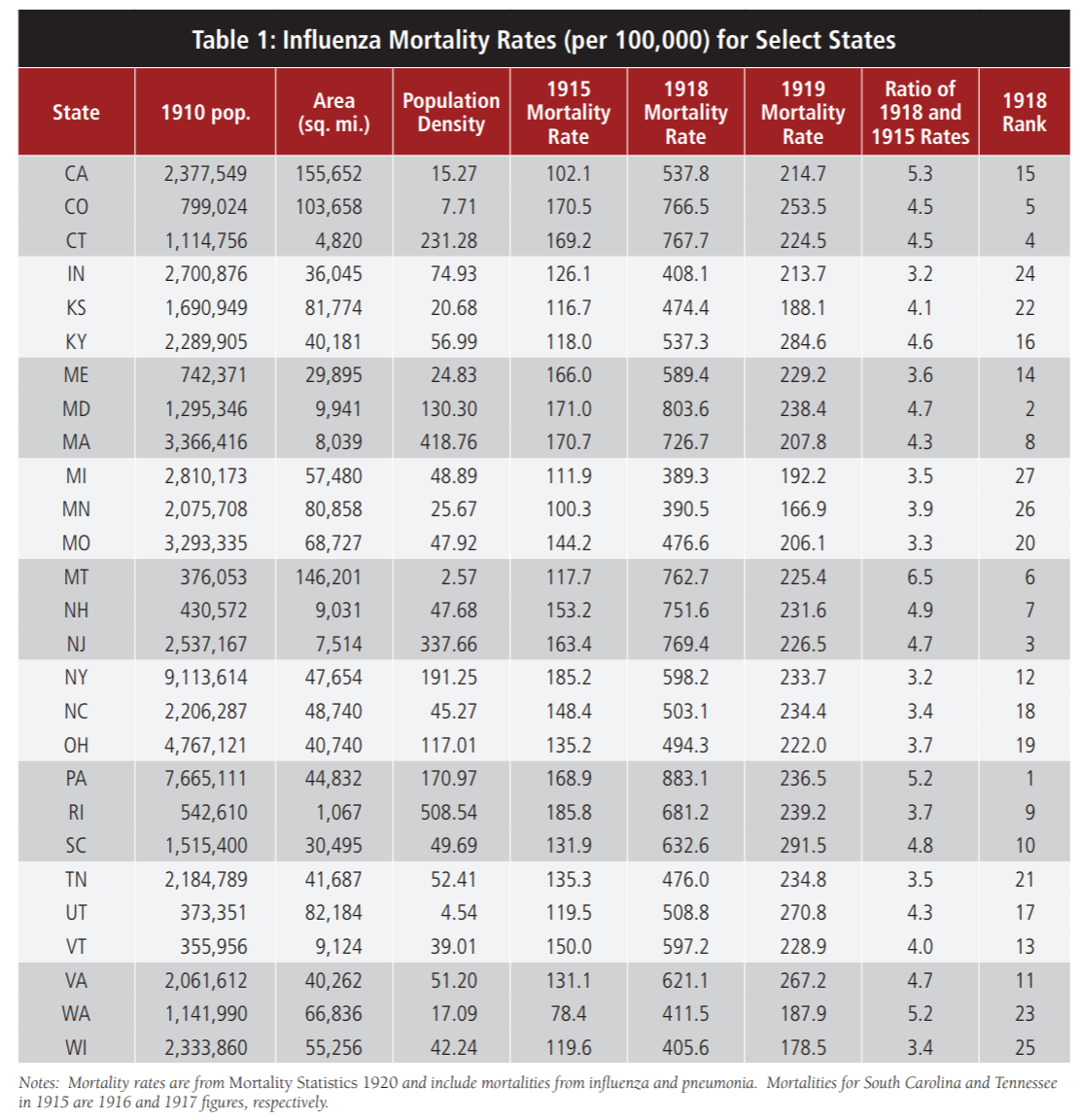 In one of the most interesting sections of the paper, the authors provide excerpts from local newspapers describing the economic impact of influenza in their community. The quotes below are all taken from a newspaper article in Little Rock, Arkansas: 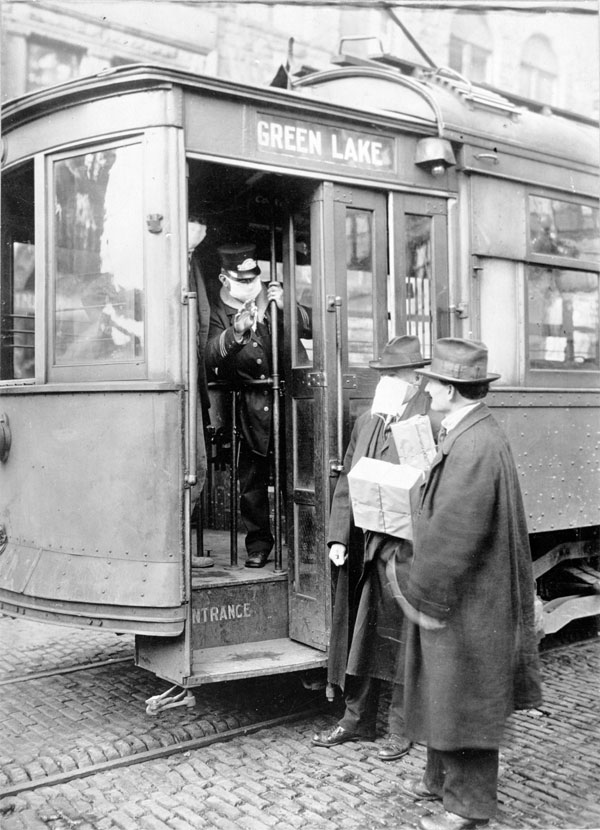 Street car conductor in Seattle not allowing passengers aboard without a mask. 1918.

Exploring the Dependence between Mortality and Market Risks 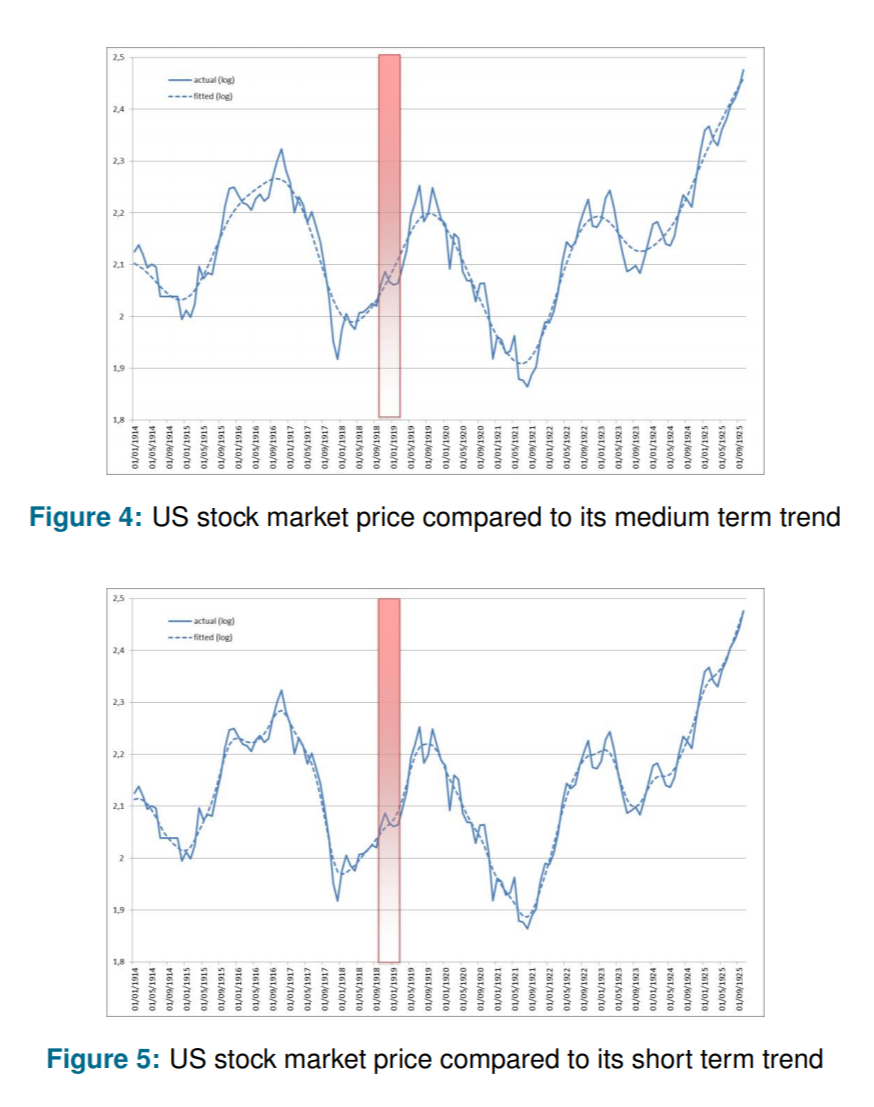 “In this paper, we develop a statistical approach to explore empirically the dependence between risks in the extremes. We apply it to study the dependence between mortality and market risks. With data for 6 developed countries, extending over 80 years, we pick the worst 10 years of mortality and compare their averages to the whole sample averages. We observe a reduction of the performance of some financial variables and an increase in correlation, but the effect remains weak and difficult to assess statistically. Moreover, our samples do not contain any significant pandemic outbreak, which limits our ability to explore very extreme events. To complement this study, we put in the appendix an econometric study by Philippe Trainar who examines the dynamic consequences of the Spanish Flu on the US market. He concludes that on a one year time horizon, he cannot detect a significant effect.”

Negative Bubbles: What Happens After a Crash

While we are not in a crash, it is still a good time to review the research by William Goetzmann, which studies crashes using data from 101 global stock markets from 1692 to 2015. Excuse the lengthy excerpt, but it’s all worth reading:

“In this paper, we document the performance of global stock markets after crashes of various magnitudes. Of particular interest is whether a rebound after a large crash – a “negative bubble” is likely. Using a large sample of 101 global stock market indexes extending over four centuries and encompassing most of the world’s identified stock markets, we find several things. First, crashes of great magnitude are rare. Despite their rarity, they are potentially interesting. A decline in asset values by one-half is frightening to investors, disruptive to the financial system and may indicate a major change in market expectations about future returns and risks. It may even represent an existential risk to the market. Investors are rightly concerned with major crashes, although they typically overestimate the probability of one. We find an interesting – perhaps comforting – regularity. The probability of a large positive return is higher following a decline in the market of at least -50%. Returns following a severe crash are on average more than 10% higher than those following a market gain. We also find some evidence in our broad sample that more modest crashes exhibit the opposite dynamic. Declines on the order of -10% to -20% are more likely to be followed by another decline. This pattern is not consistent in the data and is not present in a sub-sample of 41 major markets that does not include many of the markets that appeared since the mid-1990’s. Explaining these dynamics is challenging. We perform a number of tests to differentiate among some prevailing, persuasive theories. We find little support for explanations involving a global factor premium. Estimation confined to crashes correlated to the global market return attenuates rather than strengthens the rebound effect. We likewise find little support for macroeconomic explanations, although we are limited by sample and availability. The pattern of 19 negative bubbles may simply be an artifact of sample selection bias. A test on a relatively bias free sub-sample suggests it is not. Finally, our findings are also consistent with behavioral theories. Investor pessimism or exuberance could generally manifest as mean reversion, but in the extreme might appear as a positive or negative bubble (cf. Shiller, 2000). Our paper does not directly assess this explanation, though is a promising avenue of future research.”