The Resilience of Markets 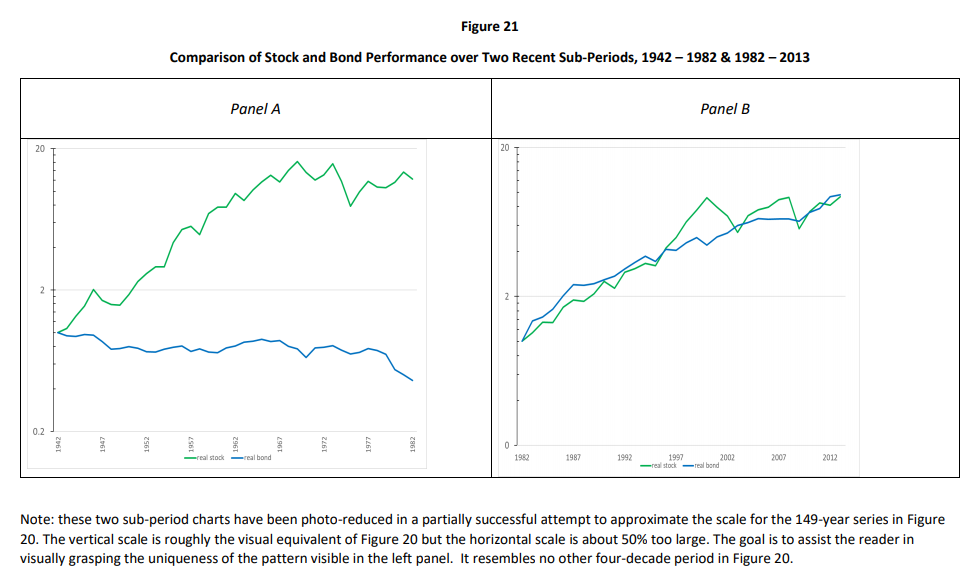 While you should peruse the entire book and find a section that sounds interesting to you, I would highly encourage you to read this section on The Speculator vs. The Investor .

It’s always easier to be a pessimist than an optimist.

You and I sit here today in May 2020 in the midst of a global phenomenon that none of us will likely experience again in our life times. An environment where entire sections of the globe have almost all been temporarily shut down at some point. For institutions like the Federal Reserve, New York Stock Exchange, Congress, state legislatures, gubernatorial offices, and others, there was little training (if at all) to fall back on in these trying times.

As these institutions have enacted new policies and implemented operational changes in response to COVID-19 there are armies of critics waiting to chastise their decisions.

Take the Federal Reserve, for example. There are many market participants and pundits critical of the central bank’s response to COVID-19, particularly as it relates to the institution’s affect on market dynamics. In the Real Vision interview below (which is now a non-paywalled link), I spoke with Jim Grant about the Panic of 1825 in relation to his concerns over how the Fed’s policy today will affect markets in future crises. I would highly encourage everyone to watch the ‘History As a Compass’ special linked below, but here was one of Jim’s takes on this topic:

‘What is different about the present? So a lot of things are the same, right? The central bank instigating reflations in reaction to a depression. And then, people riding that boom, and overdoing it, and the boom bursting, and then the central bank returns. But that’s on the script.

What is new today, in my line, is the accumulation of radical interventions that, really, many of them were based not on the immediate pain of recession or depression, but rather on the theory of our modern economist central bankers that very low interest rates and continuous stimulus are necessary to sustain business cycle expansion.

So radical policy has begotten got more radical policy. But the radical policy that preceded the even more daring interventions left behind it a frail financial structure, right? Because it has become very leveraged in the past 10 years, post-2009.

So now that we’re all epidemiologists, we can say that the economy, in this cycle, has a pre-existing condition, right? Its immune system was weakened by the continuing interventions of the central banks to help us over the preceding crisis, 2008 and ’09. So radical policy begets more radical policy, which begets low rates, still lower rates, which begets, in turn, frail structures, which reduce the perceived need to intervene still more heavily. So it’s a very interesting question about where all this leads. Yeah, actually, I don’t happen to know. I have suspicions. But it’s also new, right?’

In short, will the policy moves that seem unprecedented today become the expected response going forward?

This Sunday, however, I want to focus on the positives.

Wall Street and American markets have endured the tests of many challenging episodes in history. The Buttonwood Agreement was signed in 1792, and since then the United States of America has experienced its fair share of wars, recessions, political upheaval, Presidential assassinations, natural disasters, disease, terrorist attacks, and more. Despite all these adversities, however, the institution of Wall Street and US markets have held firm as a bastion of American finance. Take a moment to really consider this feat, as it’s truly remarkable. Much has changed in the centuries since the Buttonwood Agreement was signed by 24 stockbrokers outside of 68 Wall Street on May 17th, 1792. Yet, much has stayed the same. If you read any archival document from the years between 1792 and 2020, it is quickly evident that investors have always found reasons to fear the continued function of American markets due to some new policy or action by an institution.

However, New York is still considered the global capital of financial markets, and Wall Street continues to be revered by investors worldwide. So, this week’s Sunday Reads will focus on the first decades of financial markets in the United States, and the groundwork that our predecessors laid for investors today.

As the media and markets provide endless reasons for pessimism these days, the links below are a testament to the resilience of America as an institution, and the strength of financial markets.

History as a Compass: Coronavirus, Financial Crashes, and Lessons from the Past (NON-PAYWALL)

I am VERY excited to share the non-paywalled link to the 2 hour Real Vision special on financial history that I was asked to host. I had three absolutely fascinating conversations with well-known investors and pundits like Scott Nations, Jim Chanos, and Jim Grant.

“How does the impact of coronavirus compare to financial and economic crashes from the past? In the second episode of “Ahead of the Curve,” Real Vision takes viewers on a journey through the history of financial crises and crashes. History may not repeat itself, but understanding how we got here will help us understand where we are headed.

To that end, Jamie Catherwood of O’Shaughnessy Asset Management speaks to Scott Nations, president of Nationshares and author of “A History of the United States in Five Crashes,” Jim Grant, legendary financial reporter and founder of Grant’s Interest Rate Observer, and Jim Chanos, president of Kynikos Associates, famed fund manager, and master short seller. Nations breaks down the similarities between today and the Panic of 1907 and lessons from his book, Grant explains why the financial panic caused by coronavirus is reminiscent of the Panic of 1825, and Chanos shares his perspective on financial markets during previous crises.”

The First 50 Years of the US Stock Market: New Evidence on Investor Total Return Including Dividends (1793-1843) 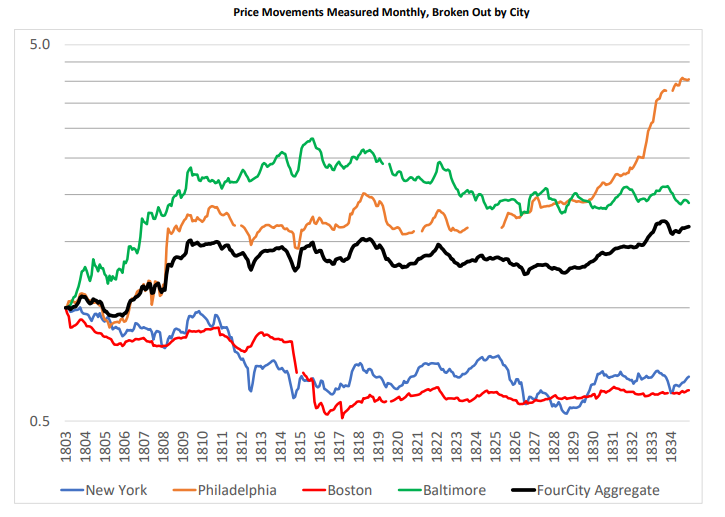 ‘Little is known about the performance of the US stock market before 1802, and evidence for the years following 1802 through the 1830s remains scanty. This paper describes a new database on total returns in the US stock market for the first fifty years of its existence, constructed in large part from data compiled by Sylla, Wilson and Wright (2006), combined with dividend information newly obtained from contemporaneous newspapers, along with information on capital stock obtained from contemporaneous directories. The new evidence clarifies the role and prominence of the New York market as compared to those of Boston, Philadelphia, and Baltimore. The outcome is a capital-weighted estimate of total returns over five decades. This estimate does not support Siegel’s (2014) thesis that multi-decade returns in the US market have always been on the order of 6.6% real, compounded. The paper concludes by considering explanations for the sub-par performance of the US stock market during this early period.’ 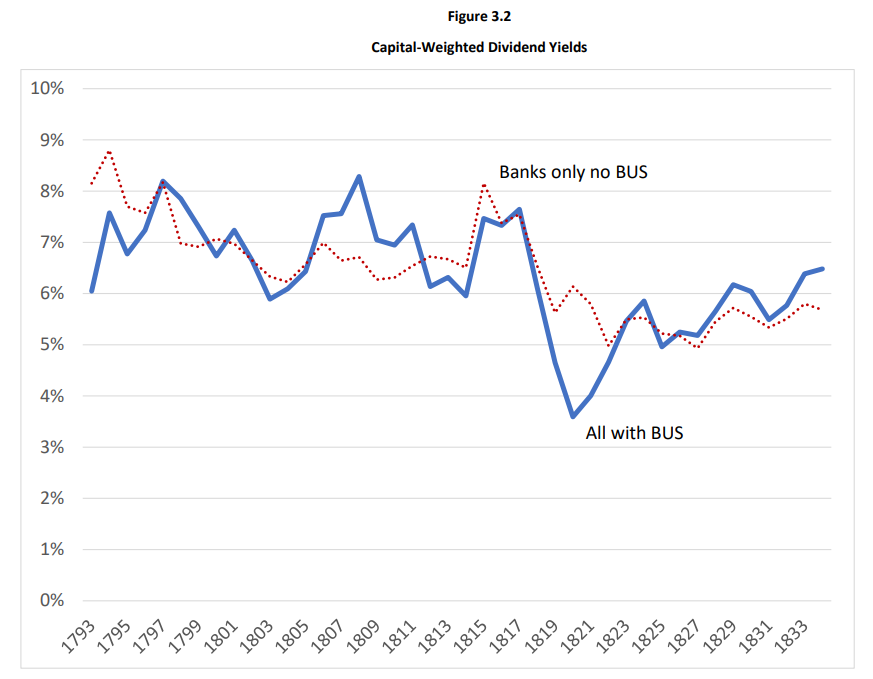 The US Bond Market Before 1926: Investor Total Return from 1793, Comparing Federal, Municipal, and Corporate Bonds 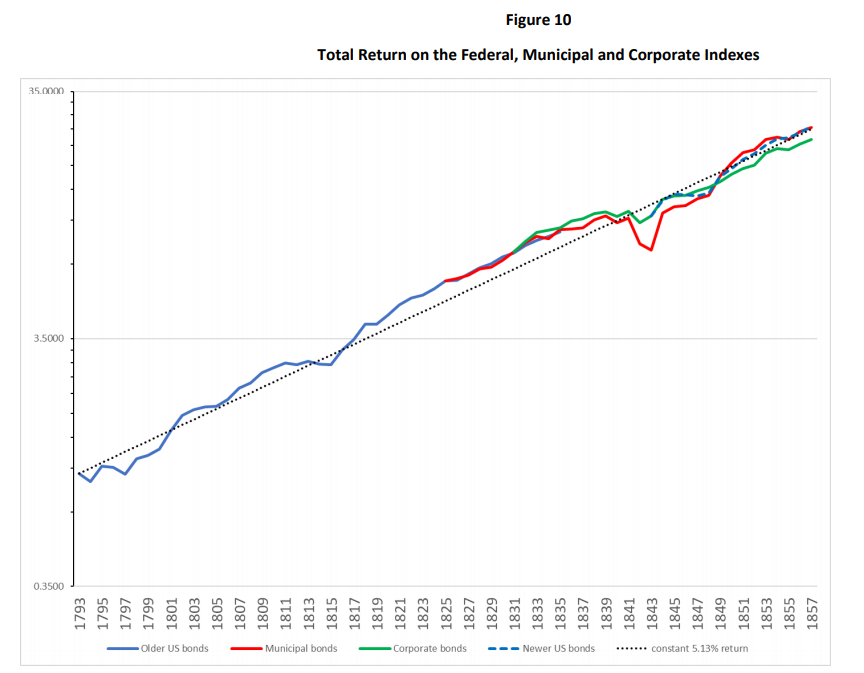 ‘US securities markets took root after Alexander Hamilton’s refunding of the Federal debt in the early 1790s. Accordingly, a market in bonds has been in operation in the US for over two centuries. Until recently, however, little was known about bond market returns prior to 1857. This paper focuses on investor holding period returns, using newly compiled data on bond prices, rather than focusing on the movement of yields, as in Homer (1963) and Macaulay (1938). It incorporates the relatively familiar Treasury securities from the years before President Andrew Jackson paid off the debt in 1835, but also includes state and city debt, which ballooned beginning in the 1820s, as well as corporate debt, from its beginnings about 1830 to its explosion after 1850.

I find that all three classes of bonds provided investors with similar total returns prior to 1857, excepting a brief period in the 1840s when state securities plunged before recovering. I also find that over the entire 19th century, real bond returns considerably exceeded the long-term average return of 3.6% proposed for bonds in Siegel (2014). In explaining these high bond returns I identify problems with Siegel’s data sources, notably Homer’s mistaken interpretation of Macaulay’s data. I further find that in these early years, bonds sometimes out-performed stocks over periods of several decades, again contrary to Siegel’s thesis. The paper considers the implications of a demonstration that stocks and bonds performed differently in the nineteenth century as compared to the twentieth century.’ 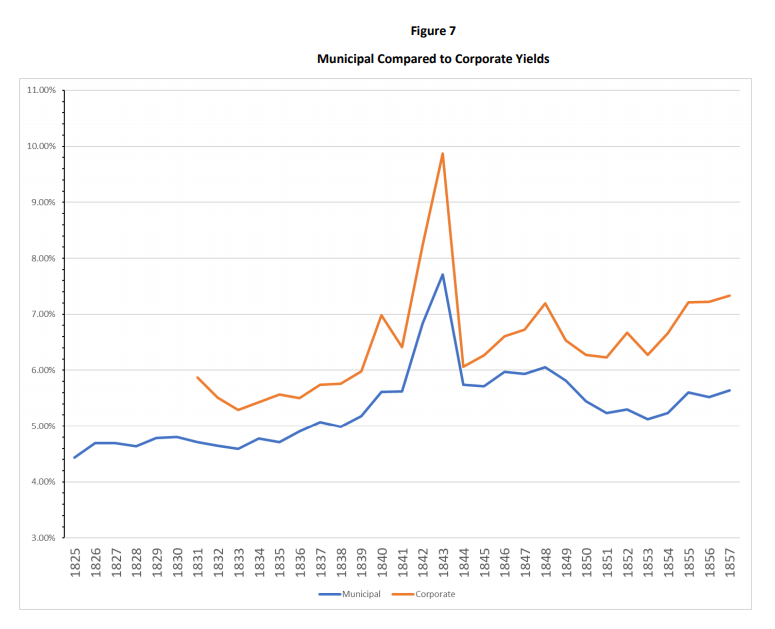 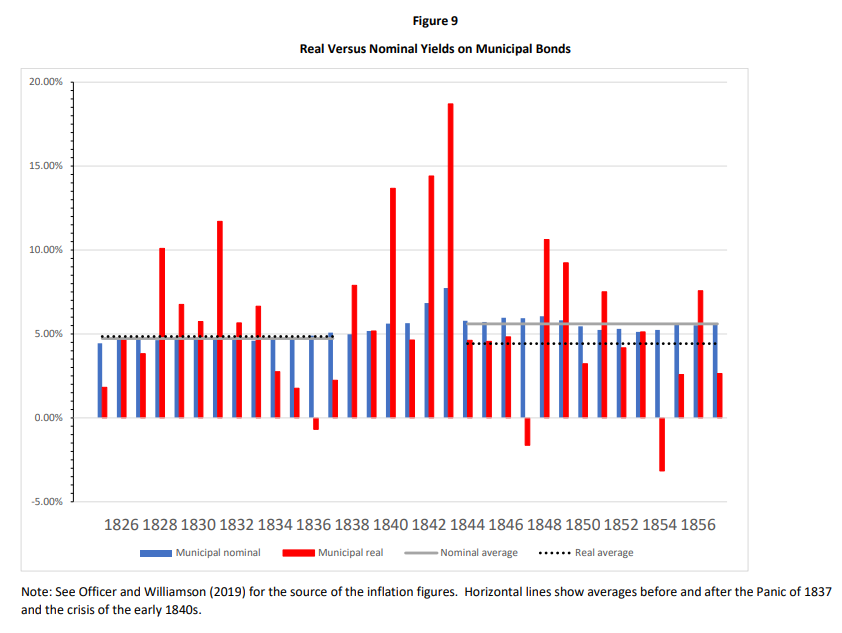 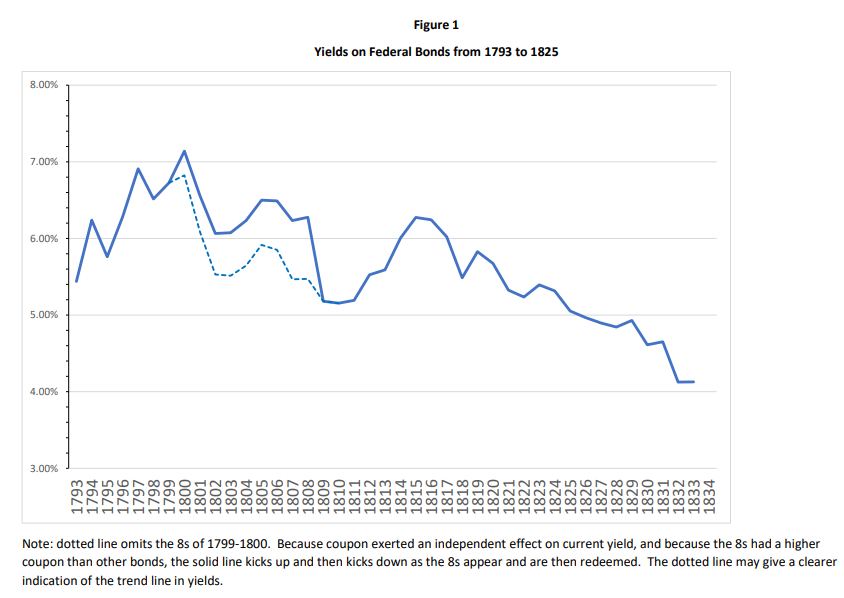 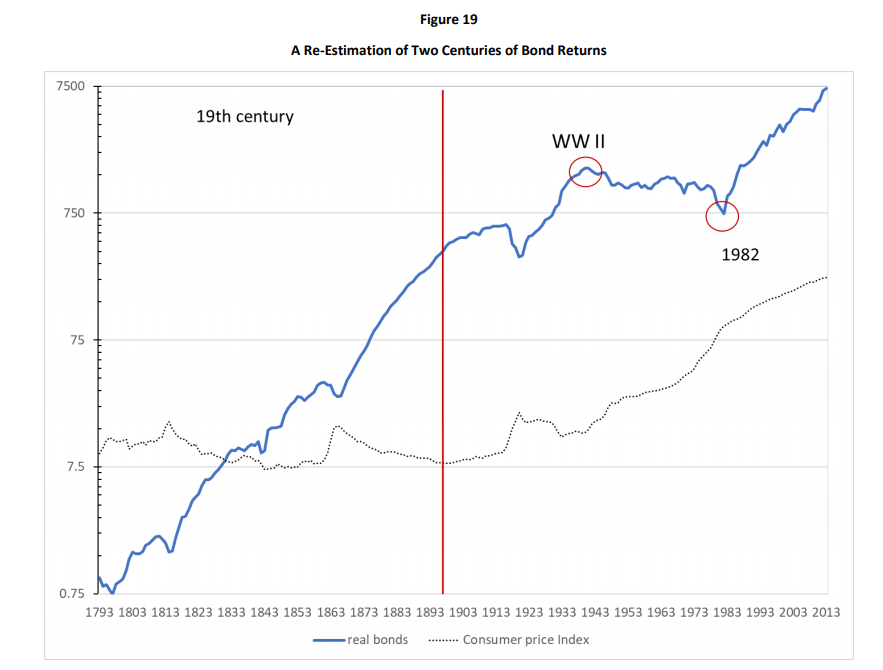 ‘From 1857 scholars have relied on Macaulay (1938) to track changes in interest rates during the period before the Ibbotson data begin. Holding period returns, where of interest (e.g., Siegel 1992a, 1992b), have been calculated from summary yield inputs such as those tabulated by Homer (1963), rather than observed prices of individual bonds. Here in Part II of the paper I explain how Homer got Macaulay wrong, misleading downstream compilers such as Siegel, and causing him to under-estimate 19th century bond returns. Values in Homer taken from Macaulay are not yields, but mathematical constructions erected on a (distant) foundation of observations. I correct Siegel’s under-estimate by retrieving bond prices from Macaulay’s sources and calculating holding period returns directly. I also correct a more general failure to treat Federal bonds properly during the greenback era. In the aggregate I find real bond returns in the second half of the 19th century to be about 150 basis points higher than Siegel. With this correction, in conjunction with corrected stock returns before 1871, I find that bond returns matched stock returns over the entire 19th century. The “stocks for the long run” thesis now appears to be a mistaken extrapolation from a few decades in the middle of the 20th century. No support for it can be found in the 19th century.’ 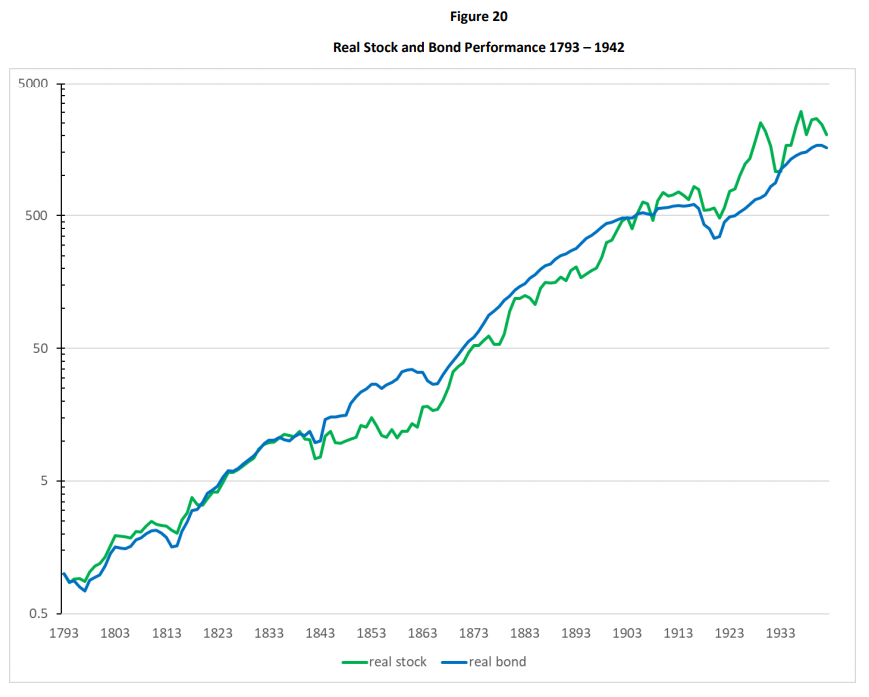 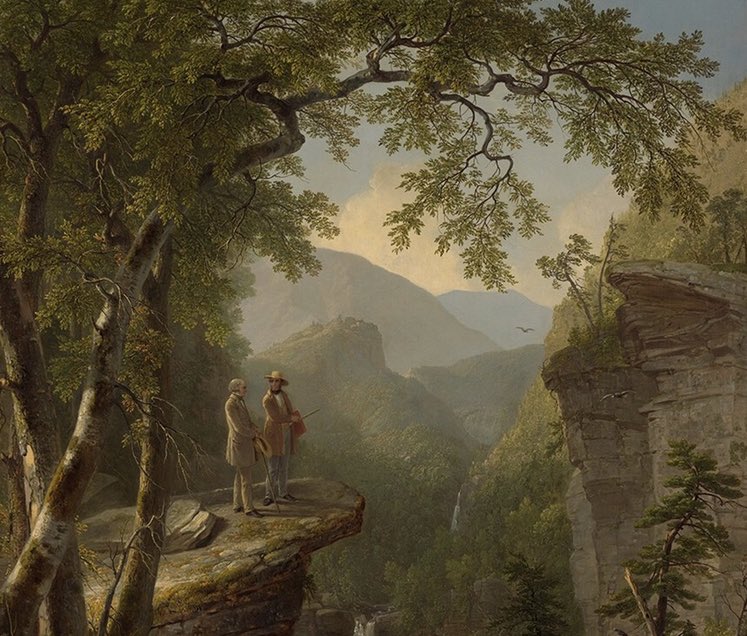 ‘The end of the 18th century was one of the most innovative periods in the history of securitization. Public markets for mortgage-backed securities are among the most interesting developments of the period. In The Netherlands, a network of merchant investment bankers used sophisticated methods for structuring loans based on overseas properties as collateral. In 1793, the Holland Land Company issued two structured notes to purchase millions of acres in Western New York. In 1794, the purchase and development of property in the newly-designated capital city of Washington D.C. was financed by mortgage-backed bonds underwritten by Dutch merchants. These securities raise questions about why investors trusted in the value of overseas property as collateral, and whether the expected rates of return on the instruments were commensurate with their risk. In our analysis, we address these questions by exploring how the early mortgage-backed securities were based on earlier collateralized fixed income instruments in the Dutch market, as well as other 18th century experiments with securitization and collateralization of land. We argue that these innovative securities resulted from an institutional framework that easily accommodated novel fixed income issues, and came on the heels of large gains to market speculation in American debt.’

‘The origins of Wall Street are tied to Alexander Hamilton’s plans for the financing of the new nation and the funding of its debt. The two hundredth anniversary of Wall Street in 1992 occasioned many retrospectives that owe more to mythology than to historical veracity. Wall Street’s earliest history consists of market corners, insider trading, and financial scandal that implicated the high (Alexander Hamilton) and the low (William Duer). The 1792 Wall Street response was in the form of private self-regulation in order to hold off  governmental regulation, setting a precedent for public policy that carries well into the twentieth century. Using new historical methodology, this article reinterprets the formative financial period of 1790-1792 and the origins of Wall Street.’