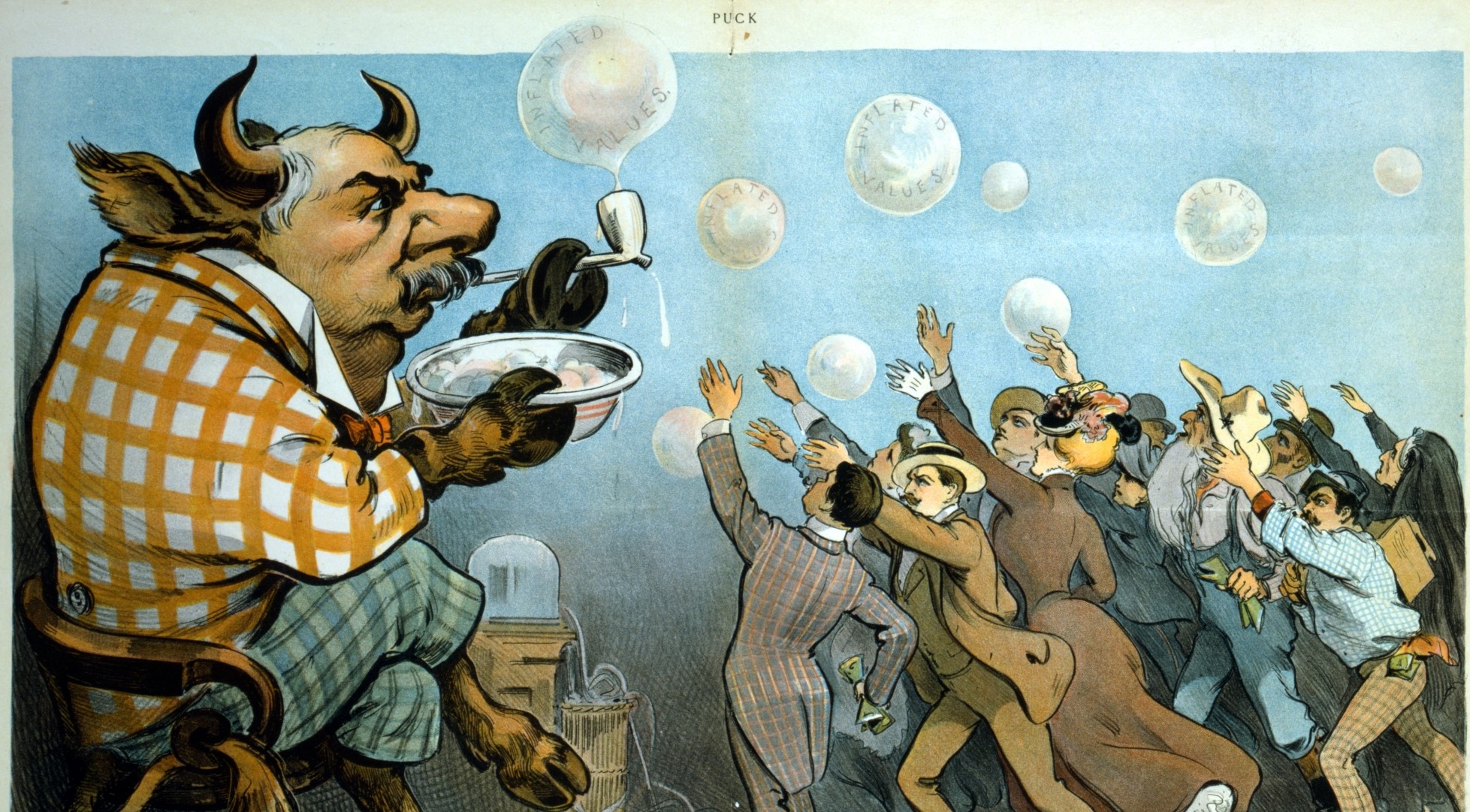 Retail is back, baby!! As I discussed in one of my Sunday Reads a few weeks ago, speculation is upon us. The Wall Street Journal recently wrote:

TD Ameritrade said it is registering growth in customers younger than 35. Online broker Robinhood Markets Inc., which said the median age of clients is 31, has increased its customer base 30% through the first four months of the year.’

Now before we go any further, I just want to ensure we’re all on the same page here… bankruptcy is not a bullish signal for stocks. In fact, most investors would say it is bearish! And yet here we are with Robinhood traders piling into Hertz shares after it declared bankruptcy:

In this quick article, I want to shed light on another illogical rally from the 19th century that makes even less sense then the rally in Hertz shares following their bankruptcy filing.

1825 was a year of bubbles and manias due to low interest rates and cheap credit. Investors that had relied upon government consol bonds for their source of income were forced to reach for yield and returns by investing in riskier assets. Most of the speculative fervor in this period manifested itself in high-yielding Latin American debt, mining stocks, and domestic joint-stock companies (I discussed this bubble with Jim Grant on Real Vision, which you can watch here). Winton summarized the boom in domestic schemes:

‘From this time ‘bubble schemes came out in shoals like herring from the Polar Seas’, illustrated by the fact that the number of bills coming before Parliament for forming new companies shot up from 30 in March to 250 in April.

All manner of companies were ﬂoated. Many were related to Assurance; there were also some novel ventures such as the Metropolitan Bath Company which aimed to pump seawater to London so that poor Londoners could experience seawater bathing, and the London Umbrella Company which intended to set up umbrella stations all over the capital.

Many ventures, however, were arrant swindles designed to test investor credulity. Such examples include the Resurrection Metal Company, which intended to salvage underwater cannonballs that had been used at Trafalgar and other naval battles, and a company (possibly a parody) which was set up ‘to drain the Red Sea, in search of the gold and jewels left by the Egyptians, in their passage after the Israelites’.”

While each of these ventures are ridiculous in their right, this article will be focusing on the bubble marked out in the image below: Poyais. 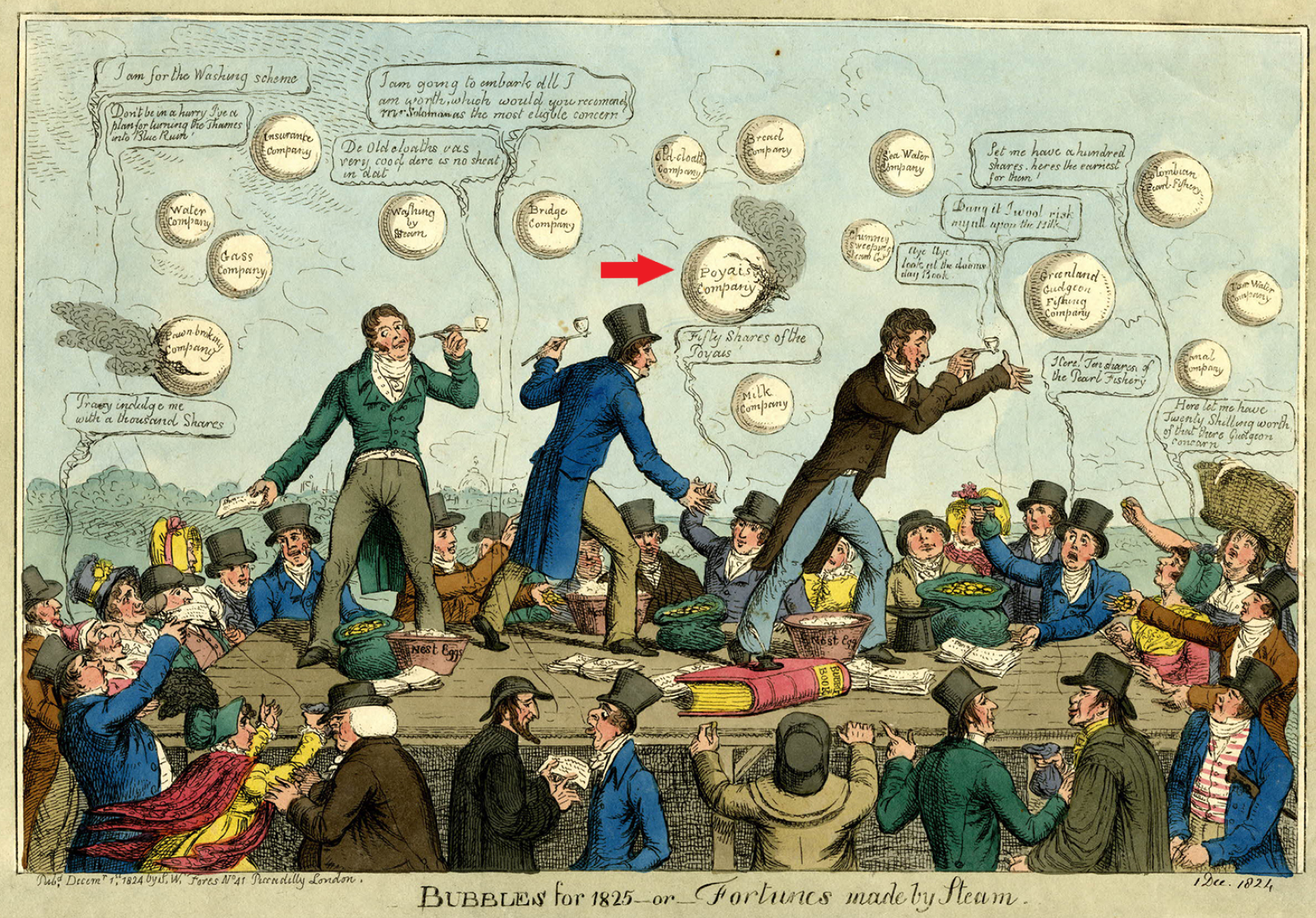 Before discussing the rubbish rally similar to the one Hertz is enjoying today, we must understand the elaborate Poyais scheme in the 1820s.

Gregor MacGregor not only had the most Scottish name imaginable, but was also deemed the ‘King of Con-Men’ by The Economist for pulling off the ‘greatest confidence trick of all time’. How does one earn this royalty status among con-men and scam artists, you may ask? In MacGregor’s case it was by finding an uninhabited piece of land on the coast of Honduras, creating a fictitious country called Poyais, and selling over a billion dollars worth of ‘Poyais bonds’ in London by misleading investors into thinking the uninhabited jungle he had found in Honduras was actually a legitimate country boasting beautiful architecture, an opera house, parliamentary building, cathedral, and more. 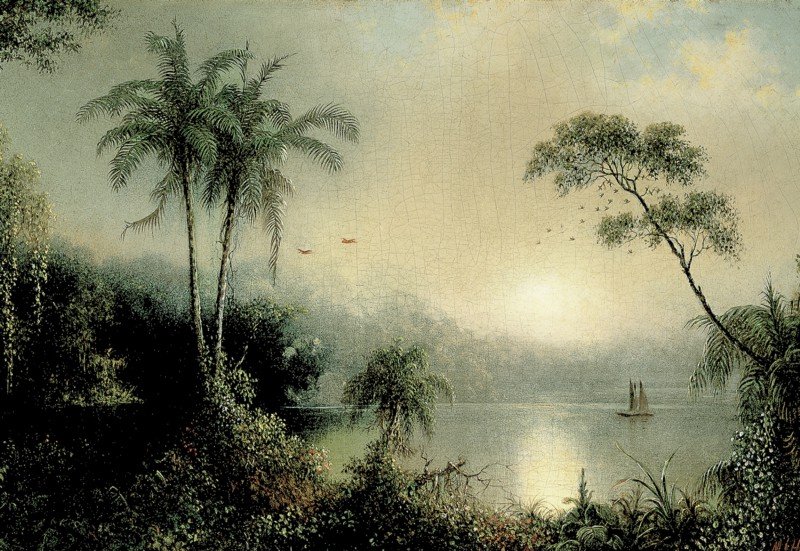 Poyais in all its glory.

As he sailed back to London, MacGregor began plotting how he would lure investors into his new scheme. As it turned out, however, the British public did not need much convincing for investing in the sovereign debt of another Latin American ‘country’ like Poyais, given the the rampant speculation in Latin American debt that already existed. MacGregor was able to easily capitalize on this mania. 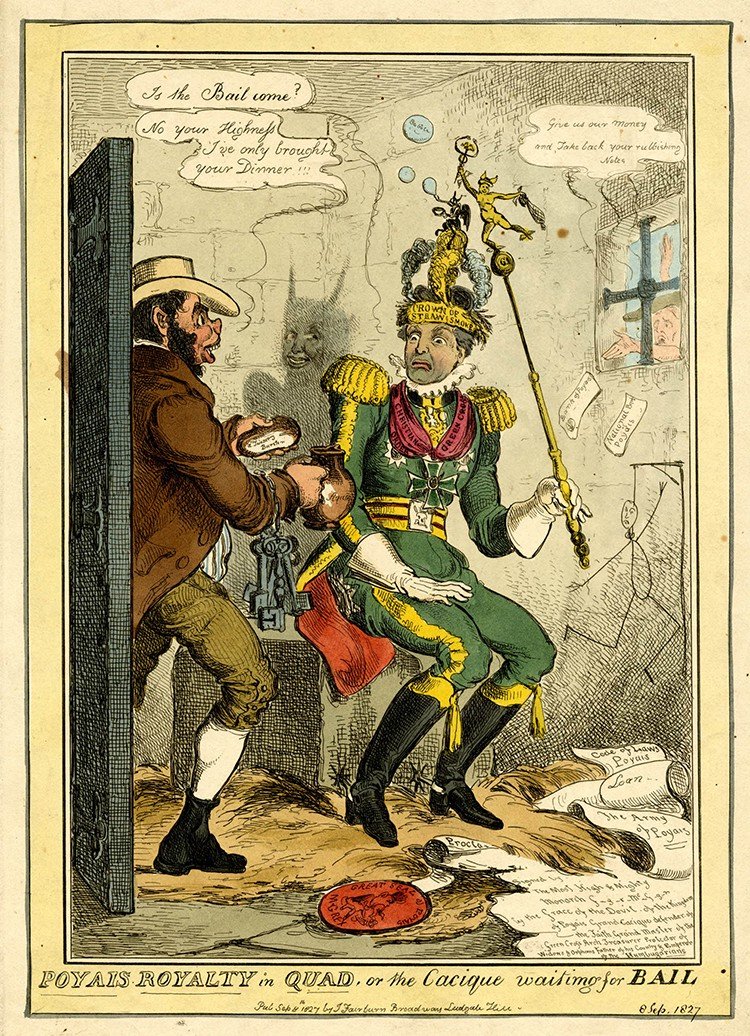 The Grand Cacique of Poyais

When the Grand Cacique of Poyais (MacGregor’s self-appointed title) arrived in London he wasted no time spreading the word about investment opportunities in his newly discovered kingdom. MacGregor even published a book detailing the tropical paradise of Poyais, and how attractive the country was for both investors and settlers alike. An excerpt from the book below even claims that MacGregor had avoided making exaggerated claims about Poyais (ha!):

The hype surrounding MacGregor and Poyais steadily evolved into a full-fledged mania as thousands of engravings were sold around London and Edinburgh portraying the magnificent buildings and infrastructure of Poyais. Just to reiterate again, the reality was that Poyais was a largely uninhabited jungle with no infrastructure of the sort. But, no matter! Nonetheless, offices were opened in London and Edinburgh for selling Poyais land grants to excited applicants at 4 shillings an acre.

After drumming up a frenzy from the British public, MacGregor focused his attention on courting investors. In 1822, the Scotsman issued $200,000 in bonds offering a 6% yield. Measured in today’s money, the value of these bonds eventually reached $3.6 billion.

Incredibly, the bonds were backed by the export-tax revenue that Poyais would allegedly generate, despite the fact that there was no infrastructure, people, or businesses in the region. At one point, the Grand Cacique even secured bonds against the revenues of a non-existent mining company in Poyais. These boring details, however, did not prevent investors from purchasing MacGregor’s fraudulent bonds. 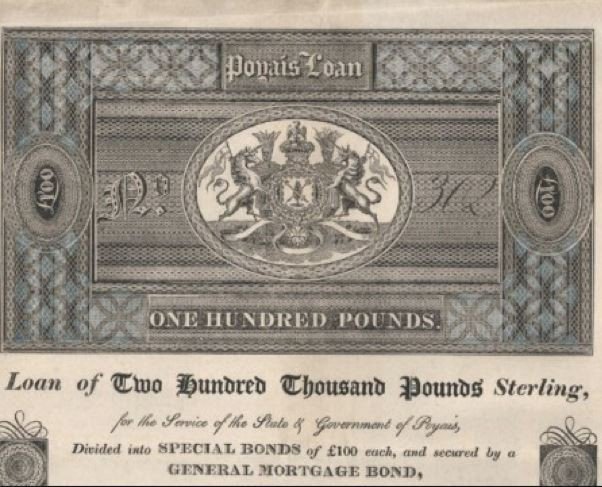 Perhaps this was due to the fact that MacGregor’s pitch came at a time when government bonds (consols) only yielded 2–3%. Consequently, when MacGregor offered investors a 6% yield on the Poyais bonds, or double the government consol’s yield, they leapt at the opportunity. Chasing returns would cost many investors their lives.

Investors in the Poyais Kingdom were jolted back into reality when the settlers arrived at their new home in Honduras.

The first ship, Honduras Packet, set sail on September 10, 1822 with 50 settlers on board. Many of them came from poor background, and had left their homeland for the utopia that MacGregor had promised. Few would live to take the return journey back to Britain.

As the ship finally pulled into the port of Poyais, nothing could have prepared the passengers for what they encountered. Far from being a tropical paradise with beautiful infrastructure, the land was uninhabited and undeveloped, apart from a couple mud-huts on the beach.

Unfortunately for the new arrivals, this discovery was only the beginning of their troubles in paradise. Shortly after they came on land, a hurricane tore through the region, sweeping away their ships. In an instant, the Poyais investors and settlers found themselves stranded. Then, when the situation couldn’t seem to get any worse, the settlers were stricken by either yellow fever, or malaria.

“Not one, was able to assist another out of such a number, and many of those who had newly come from Scotland were well advanced in years, and had come here to end their days in peace and comfort.” — Poyais Survivor

Eventually, seven ships in total came to Poyais with passengers looking to settle in MacGregor’s fairy tale paradise. Of the 240 settlers that arrived, only 60 survived.

So what does Poyais have to do with the Hertz bankruptcy rally? Well, just like the rally in Hertz shares following bankruptcy is illogical and difficult to comprehend, there was a rally in Poyais assets some 40 years after the scheme was exposed as a worthless scam.

The book Speculative Notes, written in 1864, gives an excellent account of this rubbish rally that is equally confounding as the recent rally in Hertz shares. I realize that the highlights below look daunting to read, but TRUST ME IT’S WORTH READING. Remember, this was written in 1864! 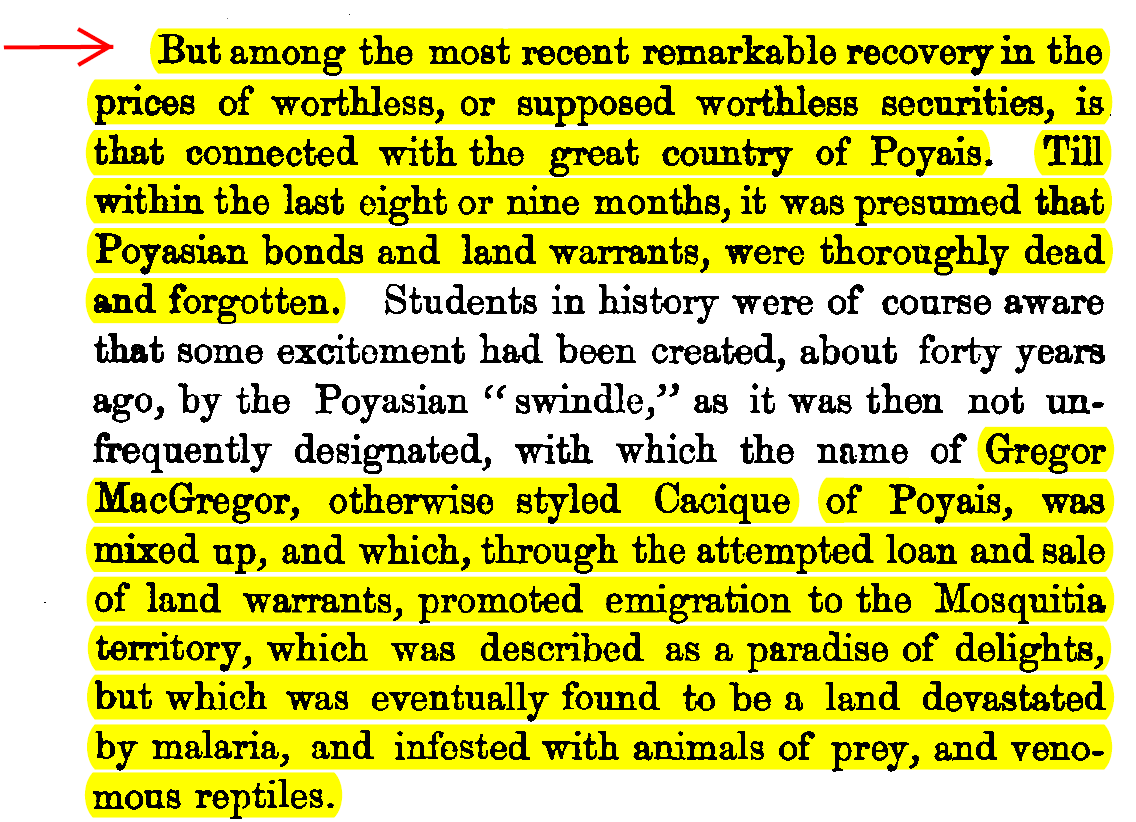 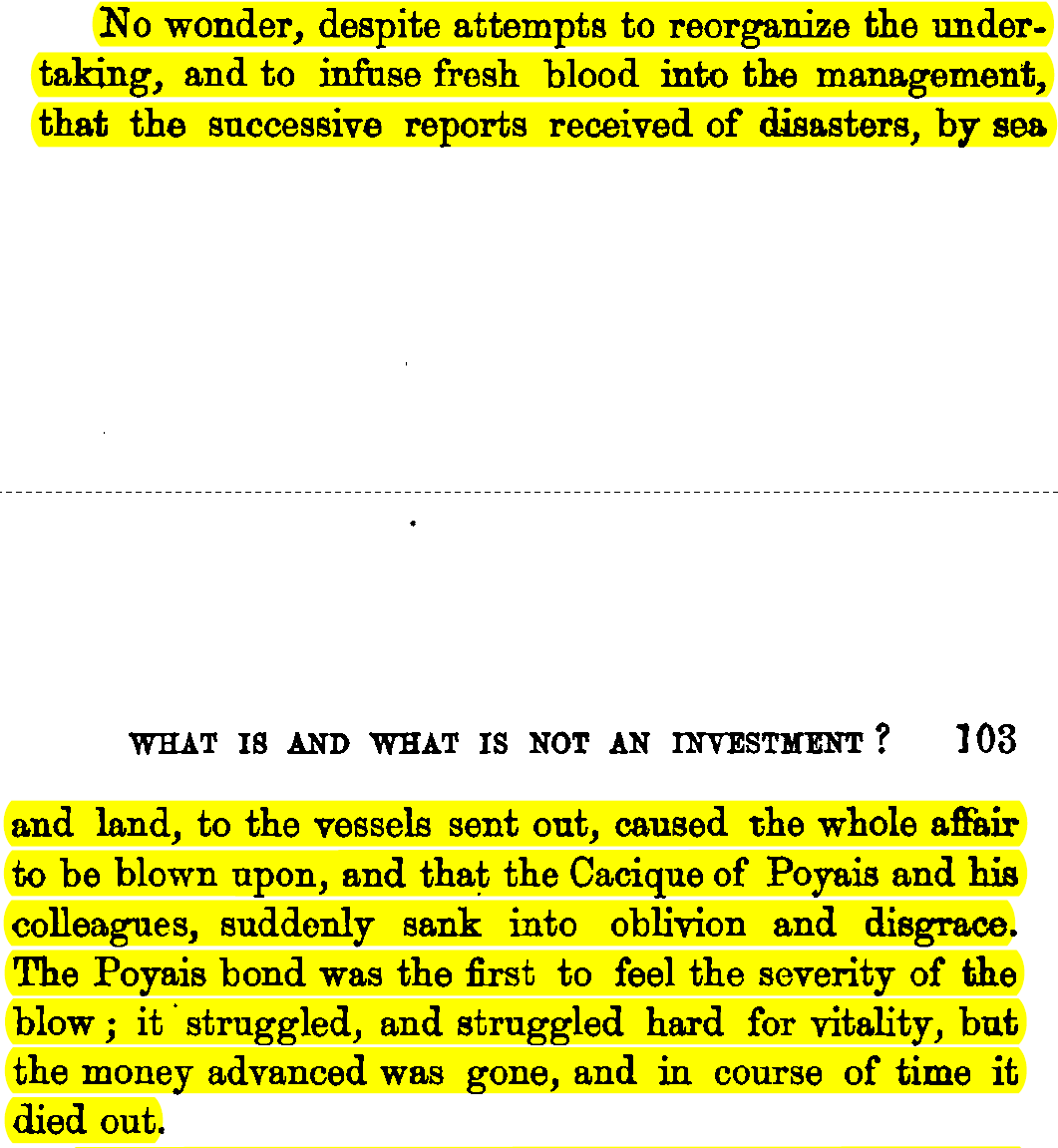 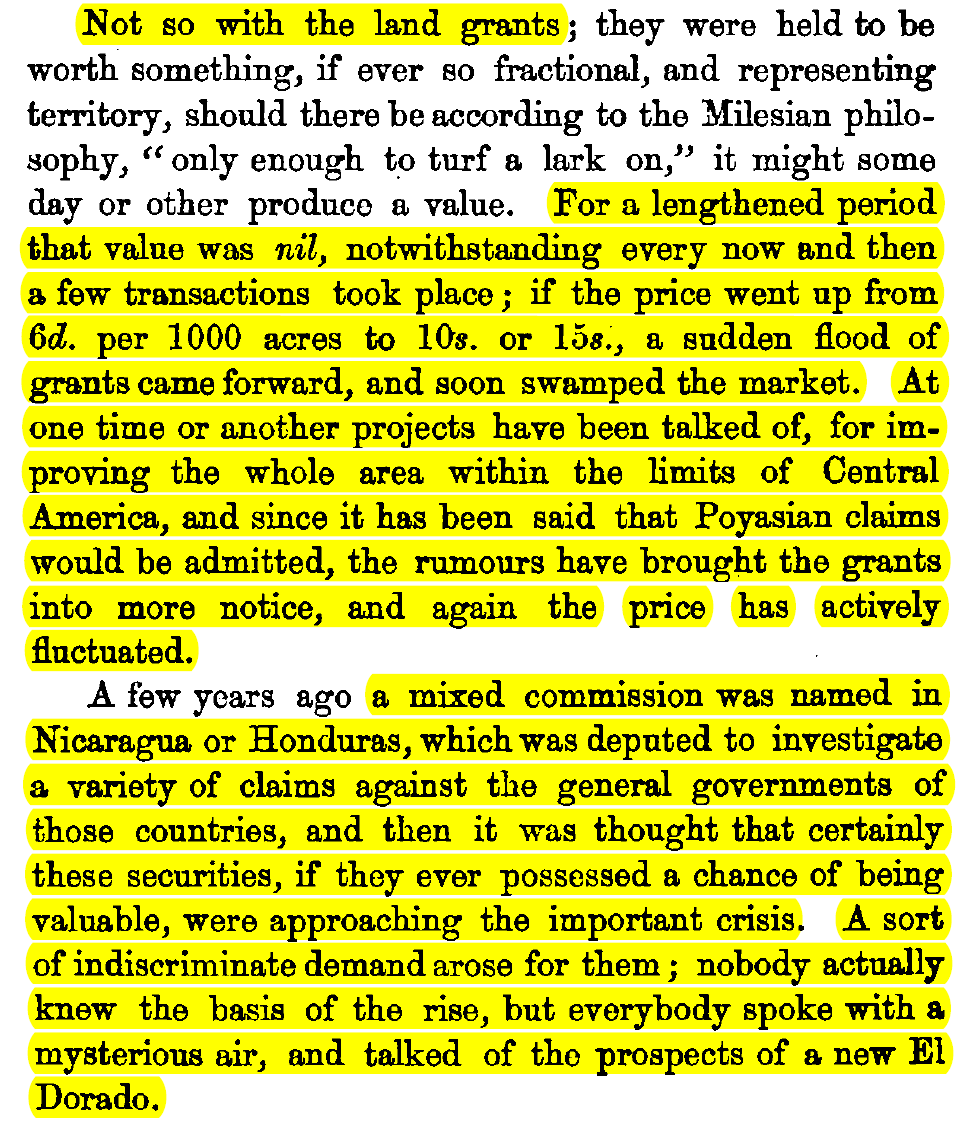 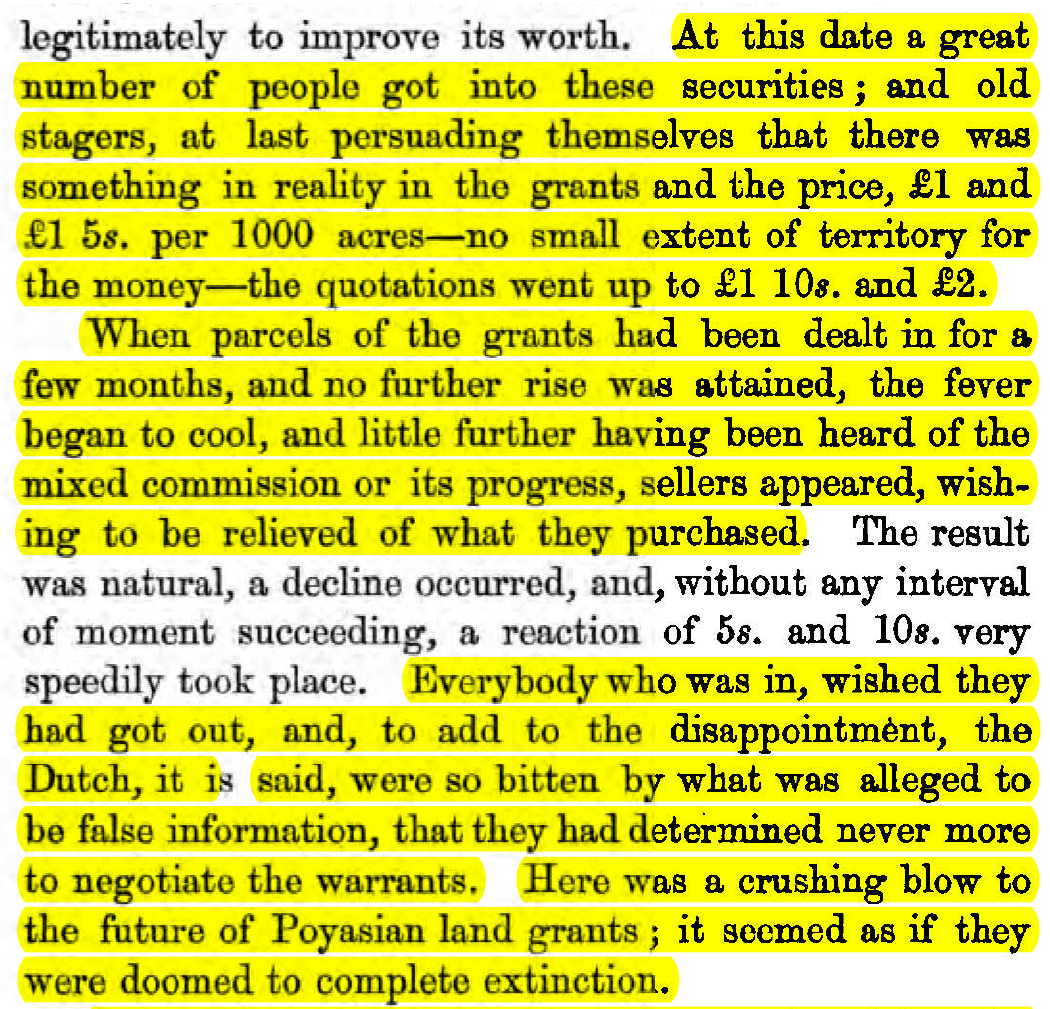 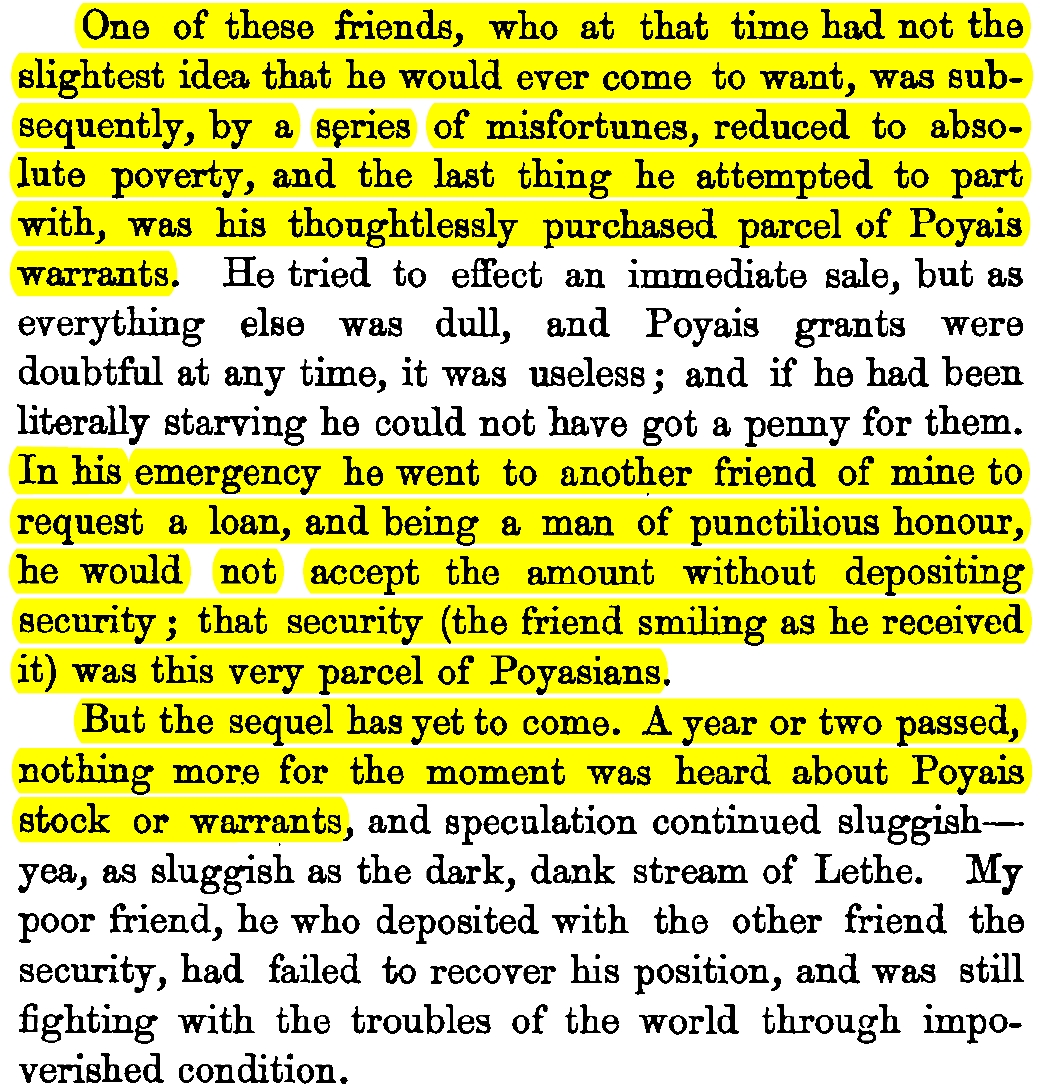 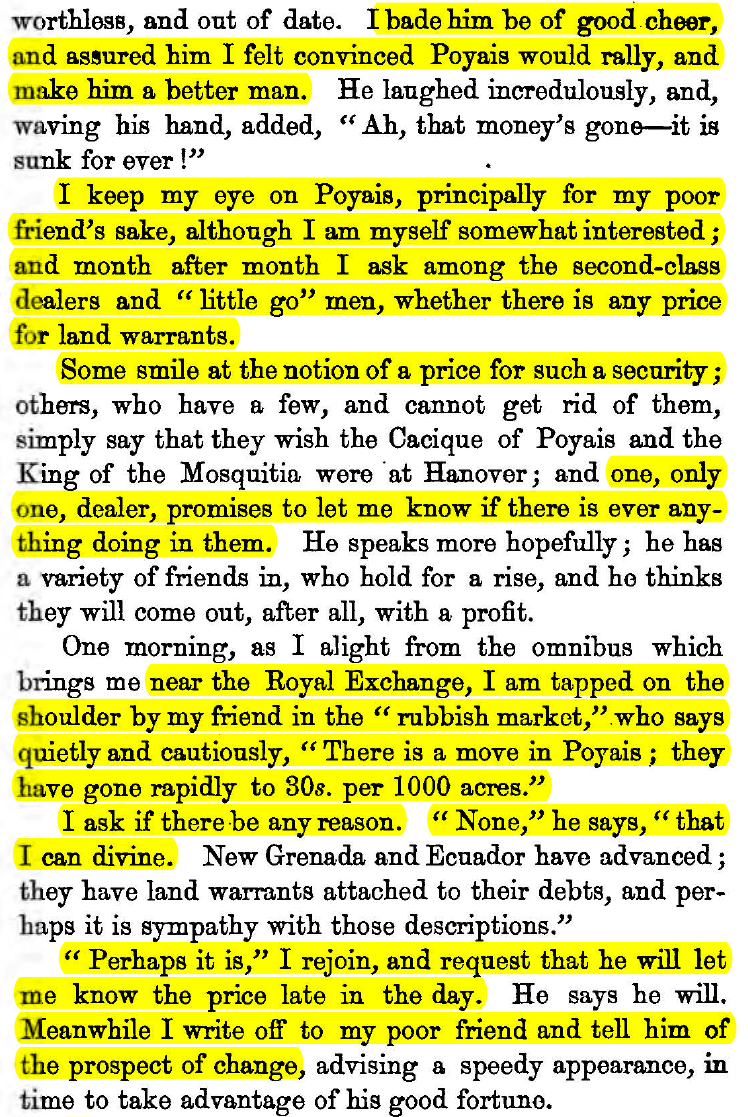 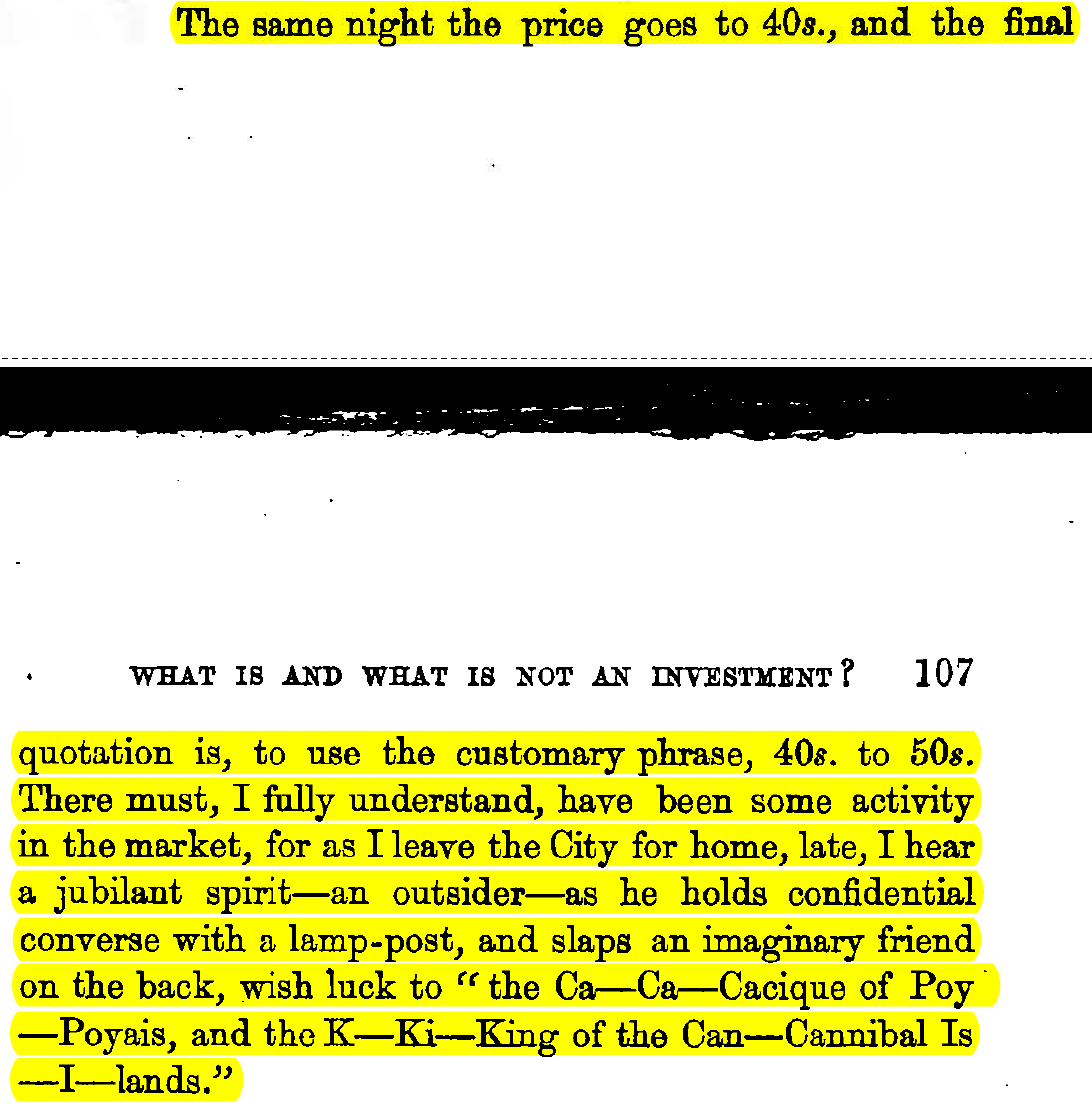 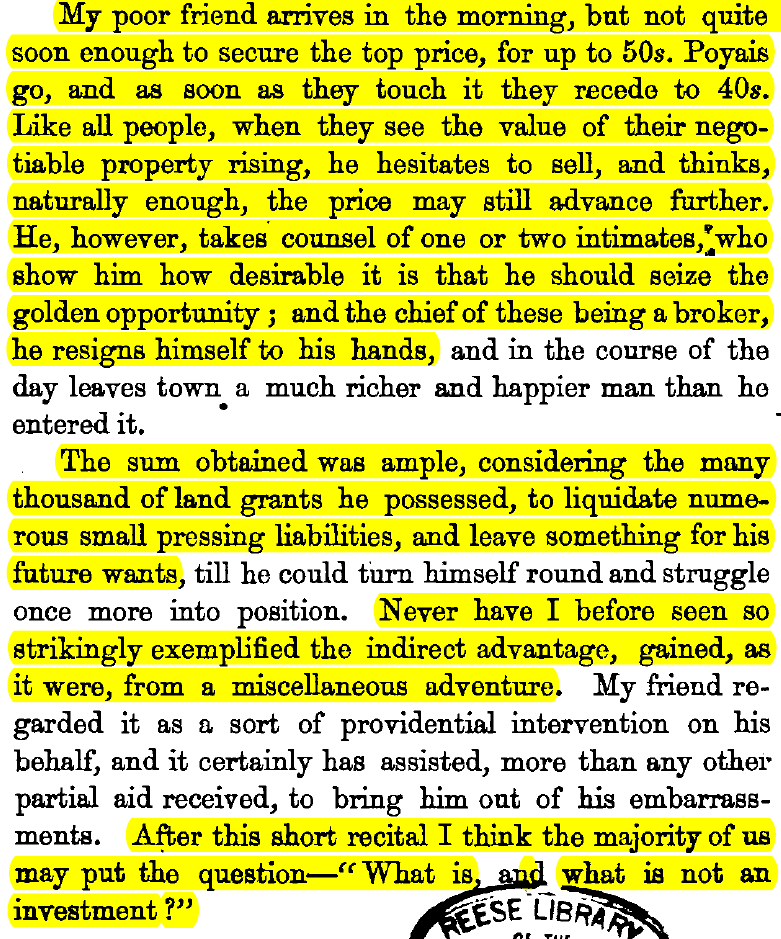 One man’s trash is another man’s treasure.

Whether it be the vestigial assets of a fictitious nation called Poyais that was already outed as a scam, or the shares of a company that just declared bankruptcy, financial history is riddled with ‘rubbish rallies’ that make absolutely no sense on paper. However, they continue rallying until the inevitable crash occurs as investors are snapped back to reality. Everyone knows what the outcome of this Hertz fiasco will be, so tread carefully.