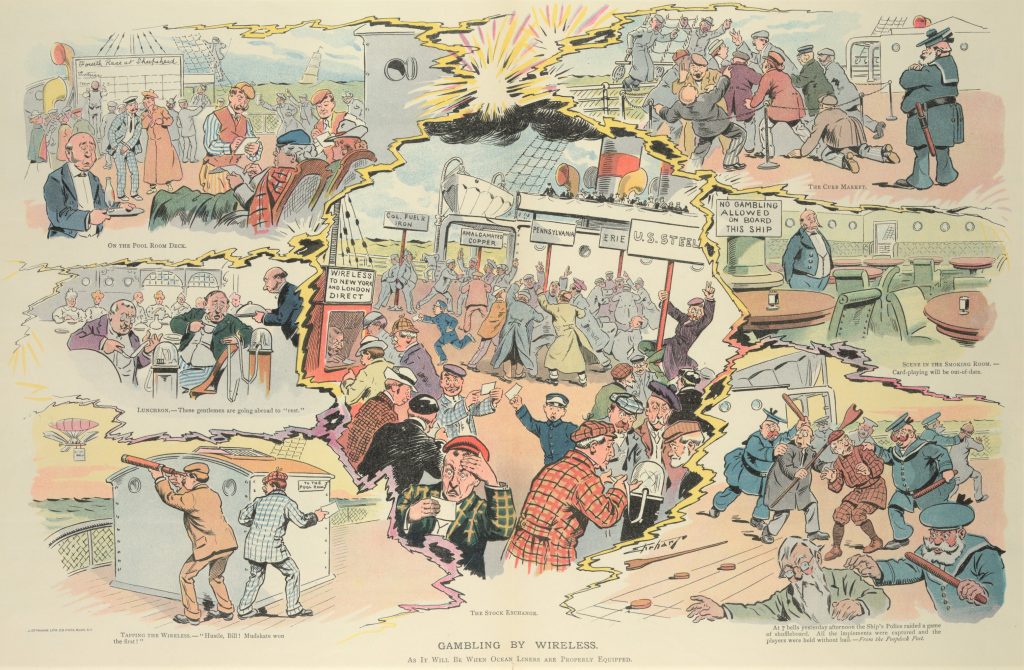 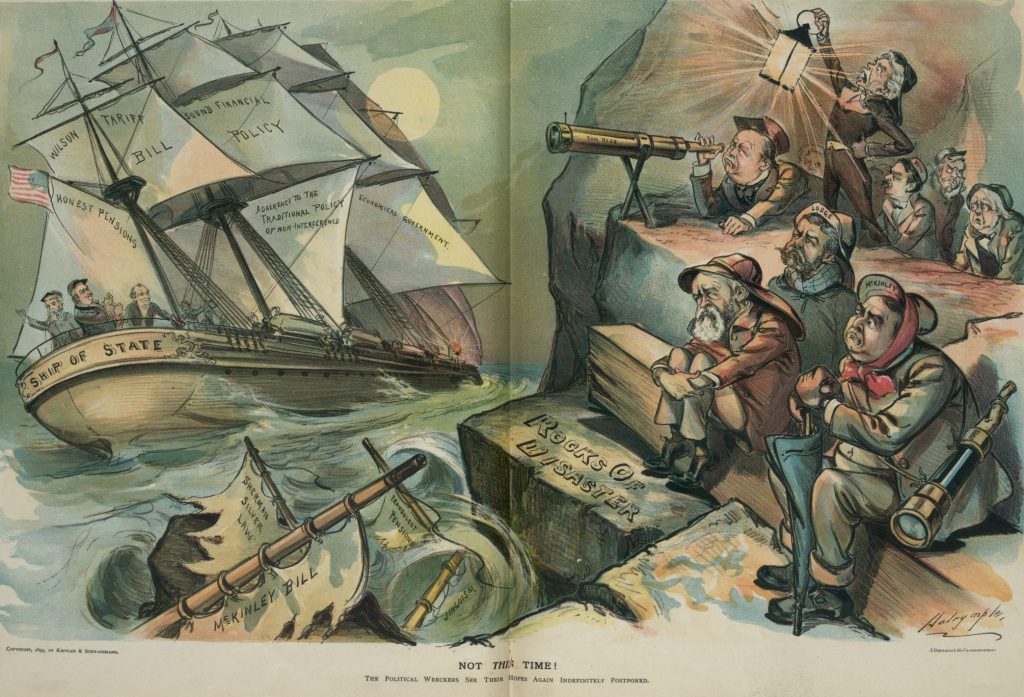 Hey there, strangers! It has been a while, hasn’t it? I apologize for the lack of newsletters over the last eight weeks or so. While I was busy with the hassle of moving apartments in DC, and watching England’s glorious run to the Euro Finals to (inevitably) fall short, honestly I just needed some time off to re-charge. However! This break was also a productive one in other areas, including progress on the second financial history course that should launch in August or September.

I can also now tell you the topic of this next course: EMPIRES.

Without giving too much away, let’s just say that the lineup of lecturers is not too shabby… for example, I had a fascinating conversation with none other than Marc Andreessen on the empires 19th century robber barons, and the “Golden Age of Piracy” in relation to startups. I cannot wait to share with you all.

And just this week, the always brilliant Tracy Alloway recorded an insanely good lecture on “what happens to the debts of fallen empires”.

Stay tuned for updates as things progress. In the meantime, those who haven’t checked out the first course on Bubbles, Manias & Fraud should do so now!

AND! Lastly… here is a sneak peek at a very exciting new feature I’ll be adding to the Investor Amnesia Website: a comprehensive financial history timeline that can be filtered by asset and theme. Each timeline event will have a summary and “Read More” link for additional reading. 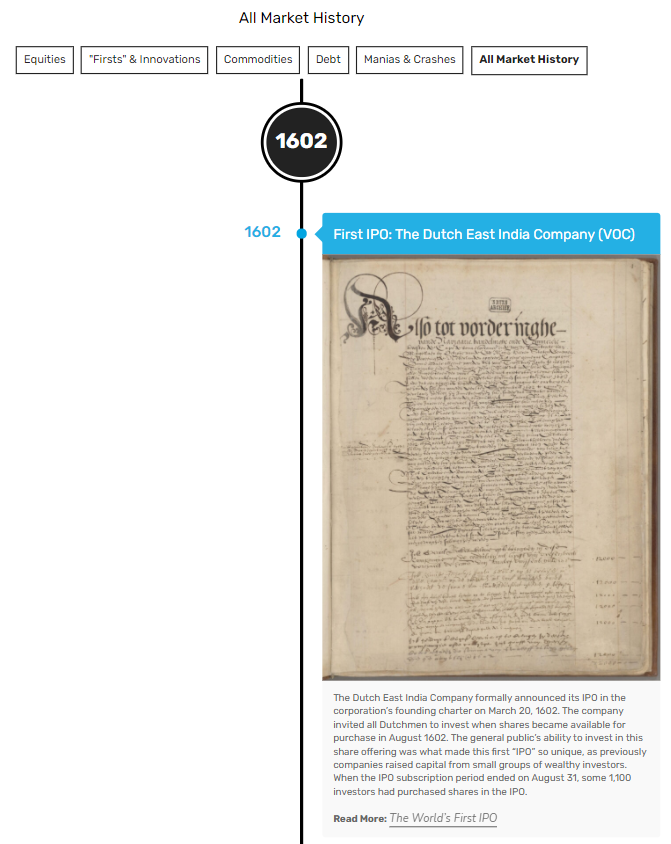 Now, back to the markets and history.

Maybe it’s just me, but it generally feels like the incessant speculation of early 2021 is petering out. Definitely still there, but more feeble than it was. I used to hear about NFTs 47 times a day, and now I hear the term maybe once a week. I don’t think I’ve heard someone mention Top Shots in two months. The topics that are now dominating headlines relate to more boring topics like inflation, Fed Policy and capital gains.

However, there are still the days when shares of AMC or GameStop rally and the Reddit narrative dominates once more, and then everyone starts to wonder if the madness is about to resume. I wonder if this will become the new ‘normal’, where there will be a plethora of ‘mini bubbles’, rather than market-wide bubbles. While obviously the latter can and will still happen, I wonder if the former will become more commonplace. This could be especially true if channels for speculation continue to emerge in new assets such as cryptocurrencies, NFTs and the like. This siloed speculation can still be intense and manic, but if a cryptocurrency reaches “bubble” territory and then crashes, the broader stock market is not impacted. Even if the siloed speculation in the meme stocks crashes, the broader market will not be too concerned.

Today’s Sunday Reads will look at speculation from a few different angles, but particularly how the type of speculative mania we’ve seen in 2020/21 can be effectively channel towards more productive ventures. In the 19th century, Railway Mania was still a speculative mania as epic as any other, but the end result was still a national railway network and transcontinental railroad. How can we replicate this? Also, I’m going to experiment with doing 3 articles each week now instead of 5, as I think the newsletters are getting a bit long. Feedback appreciated!

Speculation is Necessary. Governments Can Help. Imagine if all the speculative fervor in 2020 and 2021 could have been channeled into a productive venture or asset that benefitted society as a whole. What if, for example, the Robinhood / Reddit crowds were investing in opportunity zones (or something of that ilk) instead of meme stocks? If there was a way to get these traders excited about investment opportunities benefitting society, imagine what could get funded and accomplished?

I wrote this paper for AndreessenHorowitz as one of the first articles on their new Future website launched last month. Specifically, I look at how the US government channeled speculation into a national infrastructure project that forever changed the economic trajectory of America: Railroads.

“There are countless examples of investors succumbing to the boom-and-bust cycle of speculation. In modern parlance, this is a feature of markets, not a bug. While there will always be personal losses and hardship for individual investors that get caught out in a mania, the act of speculation is key for driving economic growth and prosperity at the national level…

So, what? Instead of wasting resources on initiatives aiming to eradicate speculative manias, we should determine how investors’ innate affinity for speculation can be channeled into productive ventures that benefit society.”

“Economist Jack Kenneth Galbraith stated that “Nothing in the 19th century is more remarkable than the way men forgot the last railroad debacle and proceeded to lose money in the next.” By not erecting barriers between investors’ enthusiasm and their ability to speculate in this national endeavor, the government indirectly helped finance the growth of America’s railways further. While there were many instances of railway fraud and companies going bankrupt as well, the railway system that was built across this nation was a feat that we still look back on for inspiration.

Across centuries, investors’ behavior and predilection for speculation has not wavered. As a society we must decide upon the grand projects we wish to accomplish, and then ensure that the public’s speculative enthusiasm can be effectively channeled into related ventures while trying to limit fraud and chicanery where possible.” 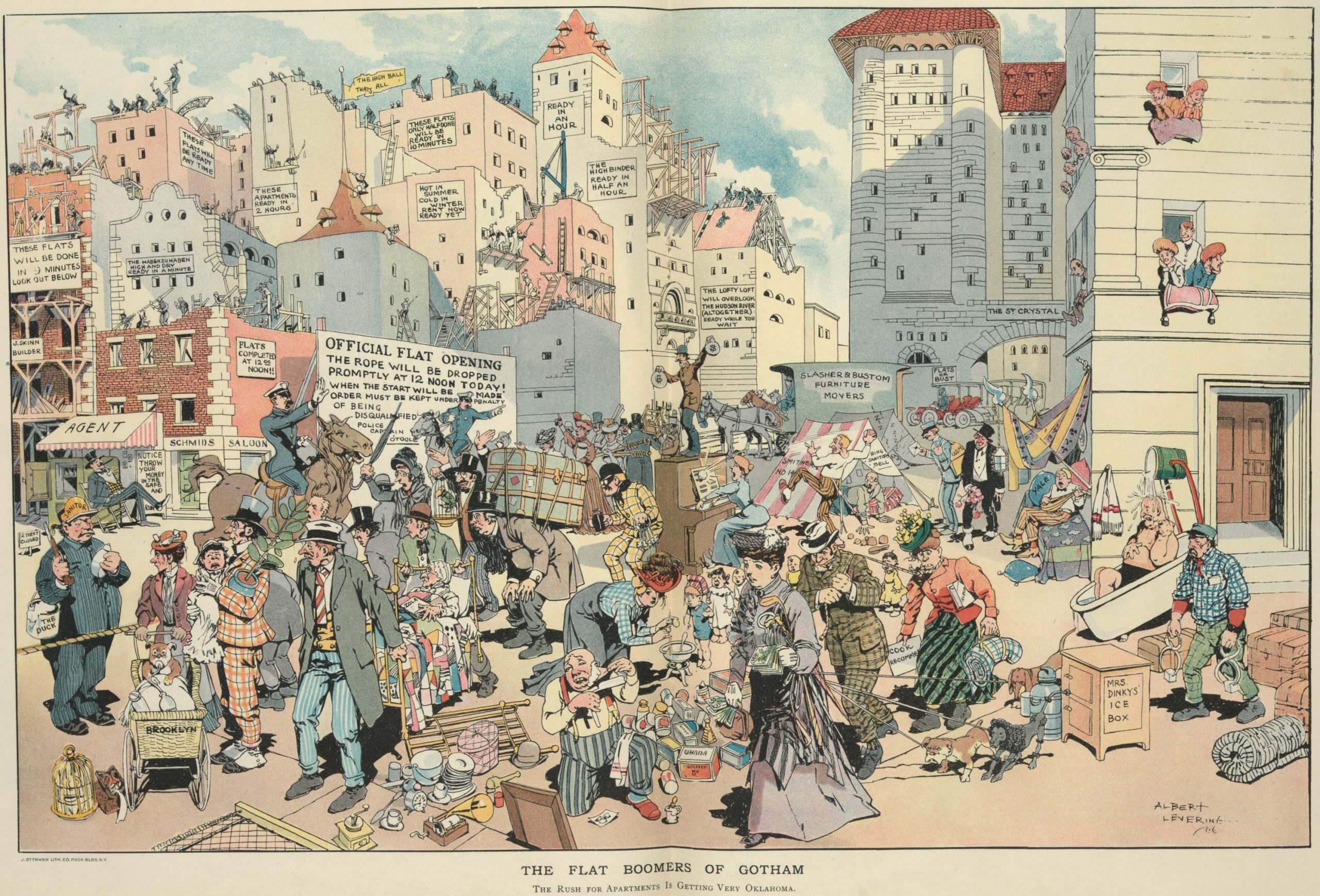 This article provides a fascinating look at a 19th century example of socially responsible / impact investing that I have not seen discussed anywhere else. With lower-income housing becoming a real issue in Victorian England, a solution was developed that combined the same concepts driving impact investing today: Positive Social Impact & Investment returns.

In fact, investors at this time had another term for what we call this type of investing: “Philanthropy & 5%”. The idea being that investors could commit to a philanthropic cause, while earning a 5% dividend or return on their investment. The market solution to Victorian London’s housing problem was ‘Model Dwelling Companies’, or MDCs:

‘From the 1840s a new group of institutions was formed which attempted to find a way to combine the public and private interest in improving working-class housing. The Metropolitan Association for Improving the Dwellings of the Industrious Classes (MAIDIC) was the first organization to be founded in response to the London housing problem.’ 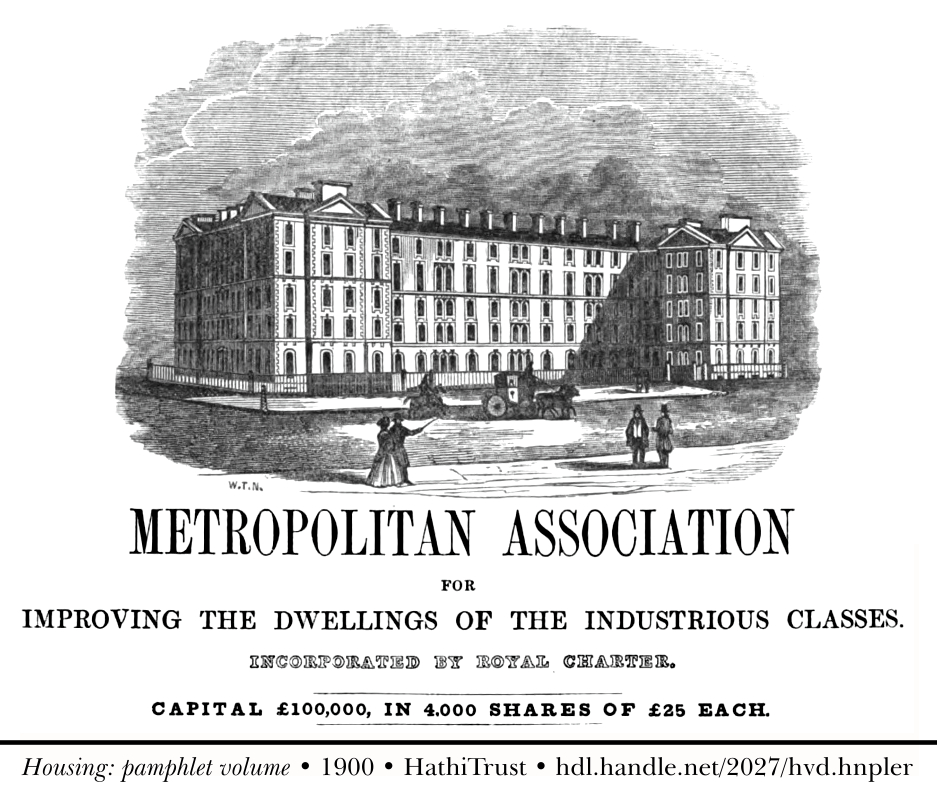 “During the nineteenth century the field of housing reform was one of the key areas where the externalities and imperfections of the market became increasingly recognized, and in the twentieth century housing became an area of social policy in which the state took a central role. Yet, in nineteenth-century England the most innovative response to the problem of providing decent working-class housing in inner-city areas was developed, not by charities or the public sector, but by a group of market institutions, called model dwellings companies (MDCs), which sought to demonstrate that there was no necessary contradiction between private profit and social welfare objectives.

MDCs attempted to develop an institutional form and system of operation which could provide affordable and more salubrious accommodation for the working classes and generate a ‘fair’ return for those who financed this provision. ‘Five per cent philanthropy’, as the model dwellings movement has become known, has generally been dismissed as a failure. Earlier studies have asserted that these companies provided an insignificant amount of working-class housing, and that they were unable to provide adequate financial returns to investors. This dismissal has, however, been somewhat hasty and premised upon assumptions about the inevitability and superiority of subsequent state provision. The study of the outputs of these organizations in social welfare terms has been incomplete, and the economics of their operation has barely been considered.”

‘Dividends were comparable with those paid by other property companies and for most of the period the annual average realized returns offered were not markedly different from those paid to holders of other domestic assets.’ 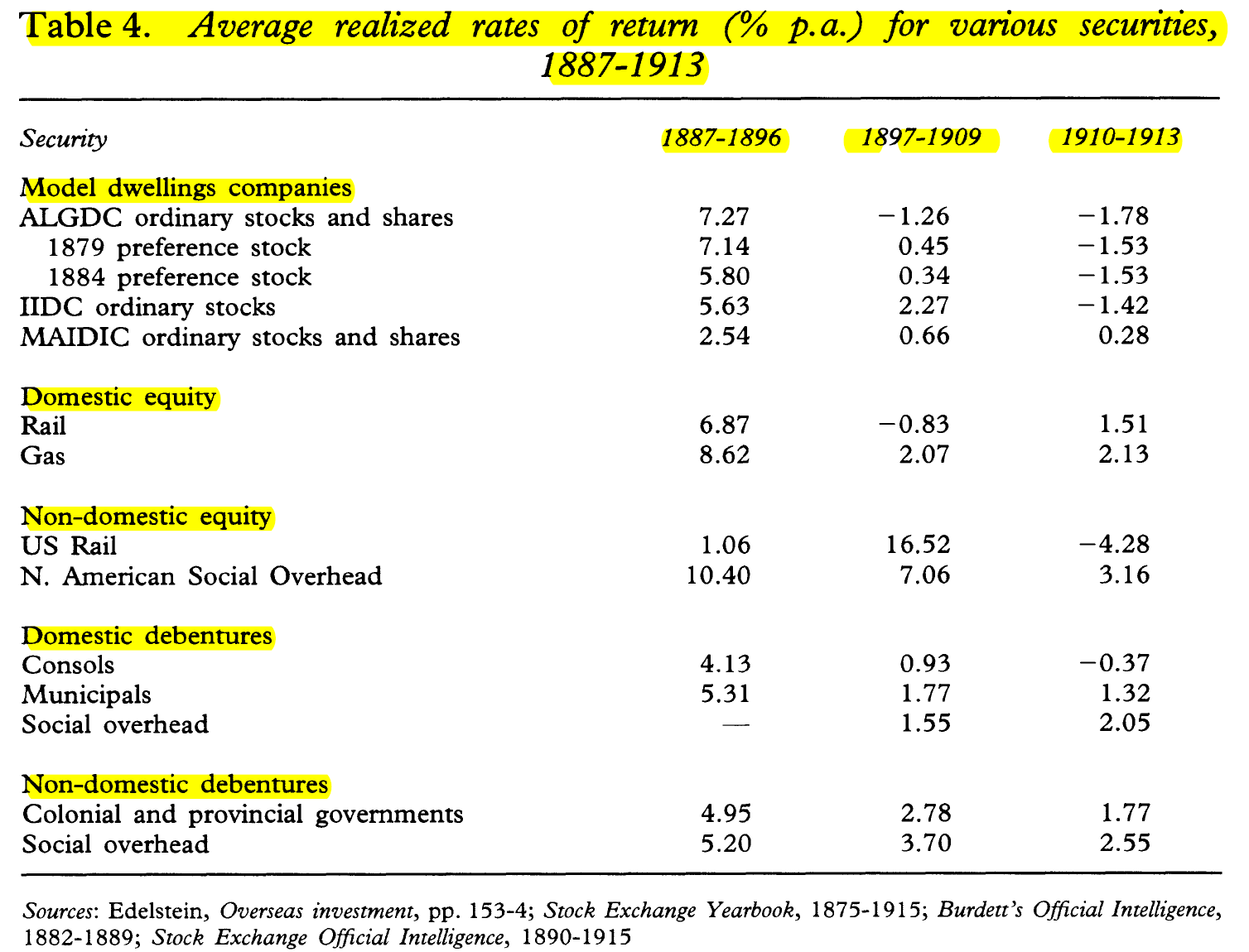 The reason this specific article is interesting, is that there is evidence that these impact investments in MDCs did not result in any material sacrifice in returns.

‘The article demonstrates that MDCs were far more important than all local government agencies in providing low-cost working-class housing in London before 1914, and that patrons were offered rates of return broadly comparable with those they could obtain from alternative domestic investment opportunities…We must now return to the question of whether investors were sacrificing personal profit for collective good by investing in MDCs.’

Technological Revolutions and the Role of Government in Unleashing Golden Ages

There are many that argue for a more active role by government to help reduce socio-economic inequality, and “leveling the playing field”. This article looks at how the government can help transition economies from the “speculative mania” phase to “Golden Ages” of widespread economic growth.

“The world is currently at a crucial turning point. As in each of the five previous technological revolutions, the major bubble collapse and the ensuing recession mark the swing of the pendulum, from finance-led to production-guided capitalism. The first decades of installation of a new set of enabling technologies and infrastructures create an enormous potential for innovation across all sectors, at the same time as they lead to a strong polarization between the richer rich and the poorer poor, among people, industries, countries and regions. Reversing those processes and successfully taking advantage of the new wealth creating potential cannot be achieved by markets alone but with the help of intelligent government action. The opportunities are there in the new technologies, in the modernization of traditional industries and in preparing for the next technological revolution. It is a question of well informed industrial policy rooted in a consensus vision, shared by government, business and society.” 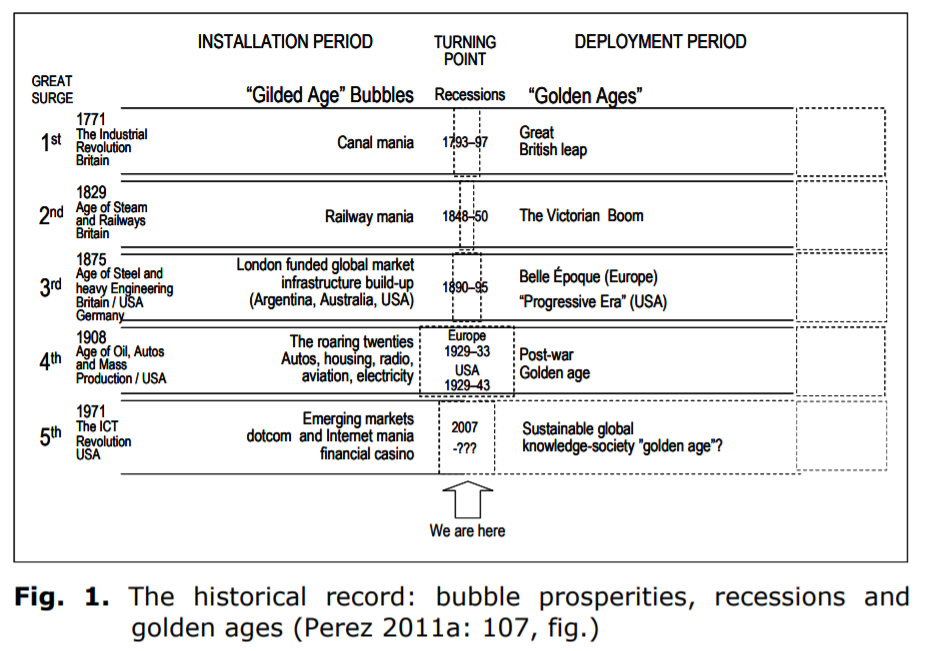 “The shift from deployment to the installation of the next revolution occurs when the wealth creating potential of the prevailing technologies has been exhausted and decline has set in. The shift from financial mania and collapse to Golden Ages occurs when enabled by government regulation and policies to shape and widen markets. The recessive interval – or Turning Point – lasts for a longer or shorter period depending on the capacity of governments, consciously or intuitively, to establish an institutional framework capable of unleashing the installed potential.”