By Jamie Catherwood August 29, 2021 No Comments 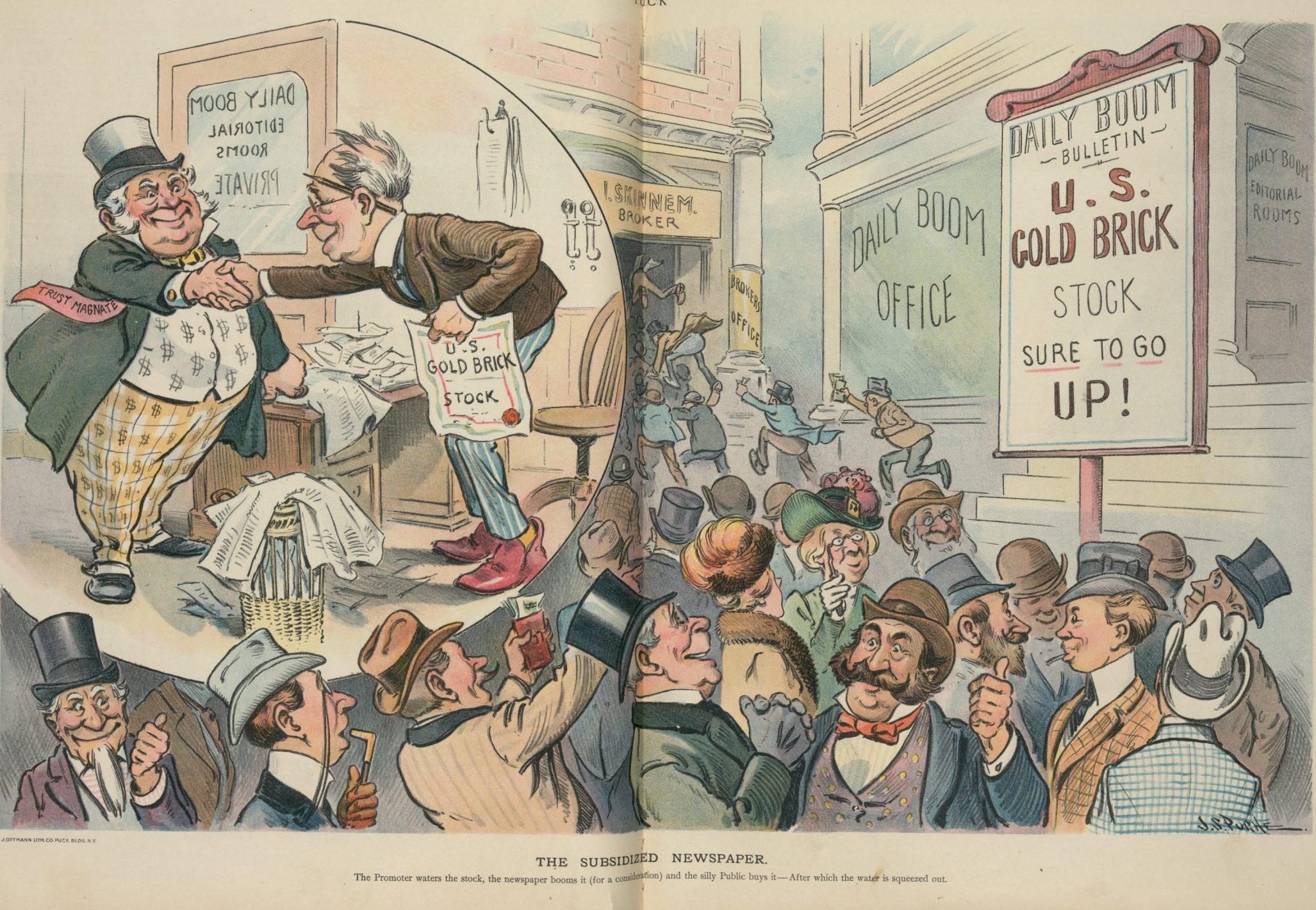 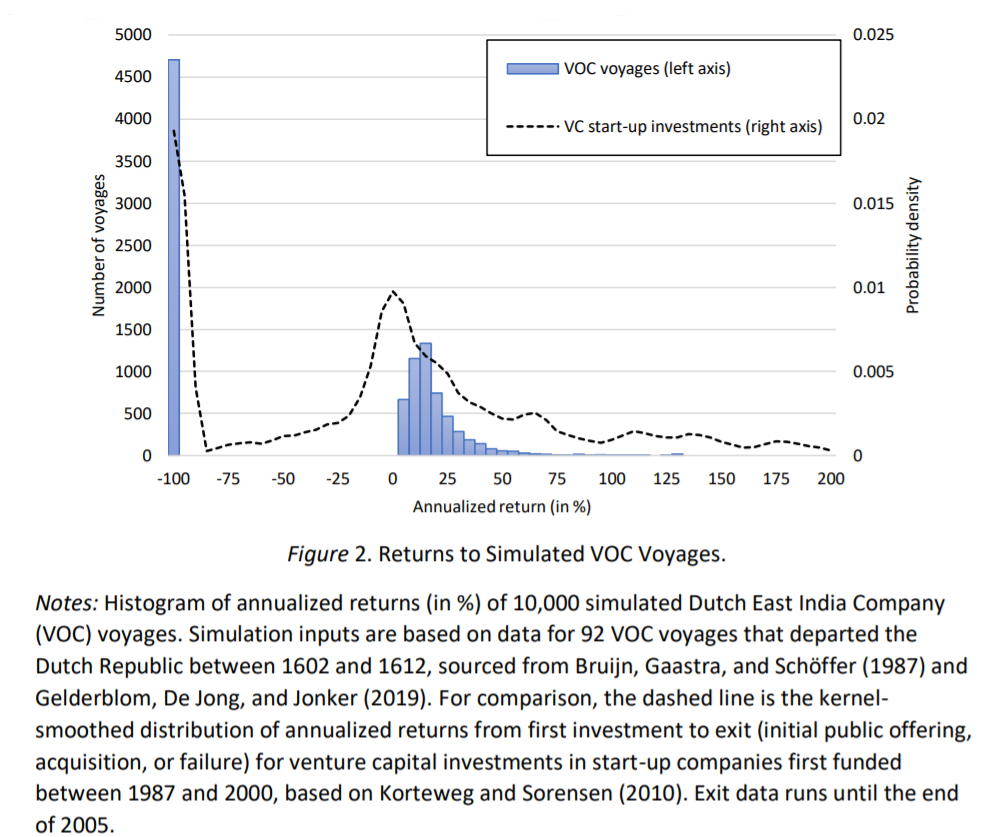 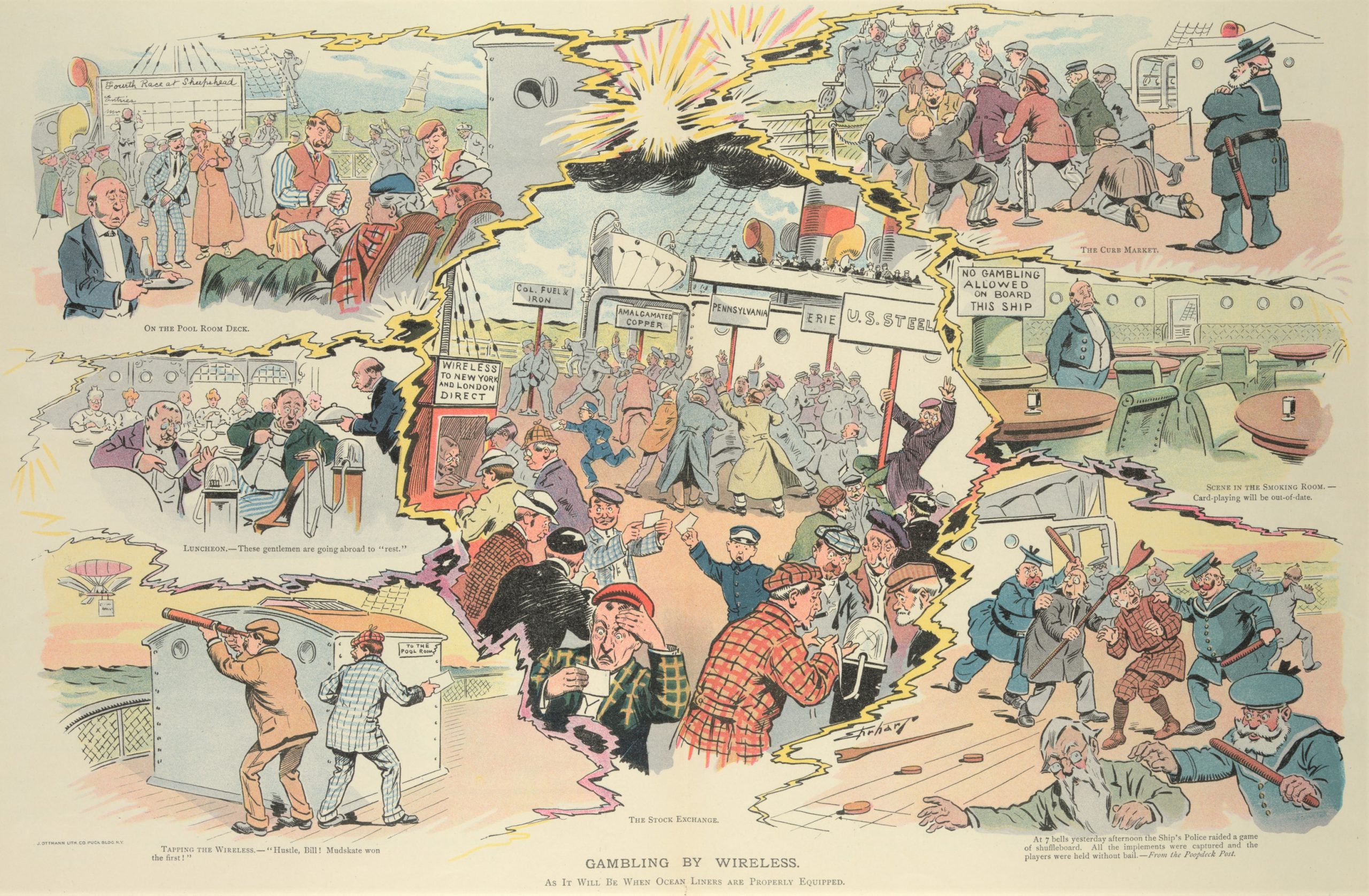 Before getting into this week’s Sunday Reads I want to share a something very exciting: This week I was fortunate enough to record a lecture and interview for my upcoming course with world renowned financial history expert Niall Ferguson. For anyone who knows Niall’s work, you can imagine how big a deal this was for a history nerd like yours truly.

Niall’s lecture will be an incredible addition to what is becoming an insanely good lecture lineup in this next course: “Imperial Finance: A History of Empires”. I mean, these are just three of the lecturers!

The course launches next month, so make sure you’re subscribed to Investor Amnesia in order to get updates on the launch (and access to discounted pricing). If you haven’t checked out the first course, learn more here . Now, onto the Sunday Reads.

Last year Chris Dixon wrote a very interesting article on “Price-Innovation Cycles” in cryptocurrencies. While his post focused specifically on crypto, I find his insights interesting across other areas of the market as well. Dixon wrote:

“These cycles appear chaotic but have an underlying order, roughly characterized as 1) the price of Bitcoin and other crypto assets goes up, 2) leading to new interest and social media activity, 3) leading to more people getting involved, contributing new ideas and code, 4) leading to projects and startups getting created, 5) leading to product launches that inspire more people, eventually culminating in the next cycle.”

You can see how this cycle is easily applied to other examples. For instance, in an article I published earlier this summer, I wrote something along these same lines conceptually:

“The government helped foster speculation in railway shares by playing to the innate behavior of investors. Rather than standing in the way of speculation or trying to curb it, the government took full advantage of it by offering land grants to encourage more railroad companies to form. Investor’s speculative tendencies took care of the rest. Soon, a feedback loop for speculation had formed.” 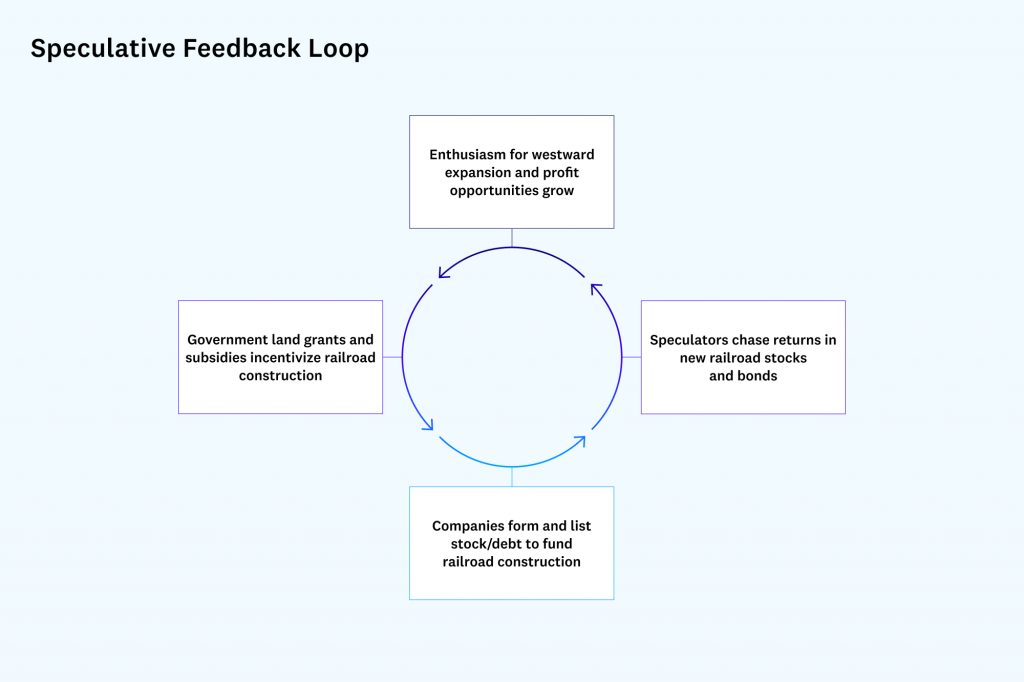 I will explore this topic further in future Sunday Reads when I have more time following the launch of my next course, but for now, let’s dive into the history of funding innovation, speculative feedback loops, and early venture capital! 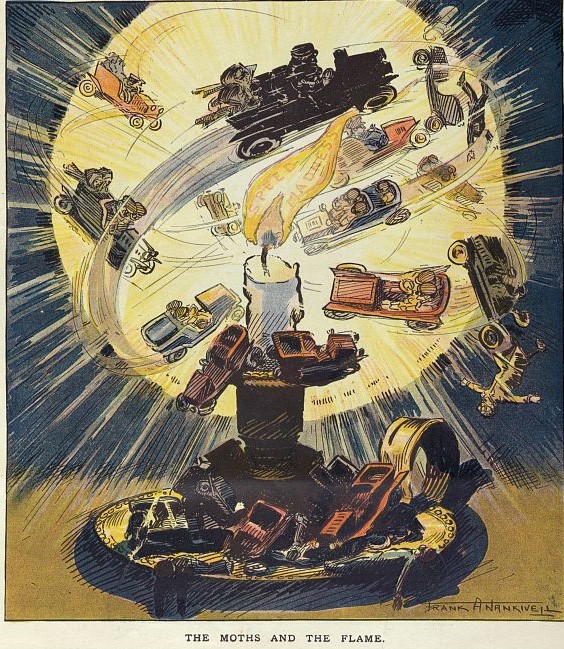 What is the value of innovation in markets, and how do investor’s assess this value? In this paper, Tom Nicholas covers the 1920s stock market boom through the lens of intangible assets and innovation. He argues “There appears to have been a major shift in investor psychology towards intangibles during the stock market boom.” Most pertinent to this “Price-Innovation Cycle”, however, is his comment that:

“Investors both financed innovation directly, and indirectly they encouraged investment in technological development by inducing stock market rewards for innovation.”

“This article investigates whether the run-up in stock market prices during the 1920s was related to the accumulation of intangible capital by firms. I use a matched data set of company financials and historical patent citations for 121 publicly traded firms between 1908 and 1929.

I show that the returns to intangible capital were approximately three times larger during the 1920s compared to the 1910s reflecting significant changes in the configuration of company assets between these decades. Intangible capital growth was substantial in 1920s America, investors realized it, and they integrated this information into their market pricing decisions. There appears to have been a major shift in investor psychology towards intangibles during the stock market boom.

One implication of the findings is that investors were not only more responsive to intangible capital at this time, but through triggering large stock market payoffs for innovation they also encouraged its growth.” 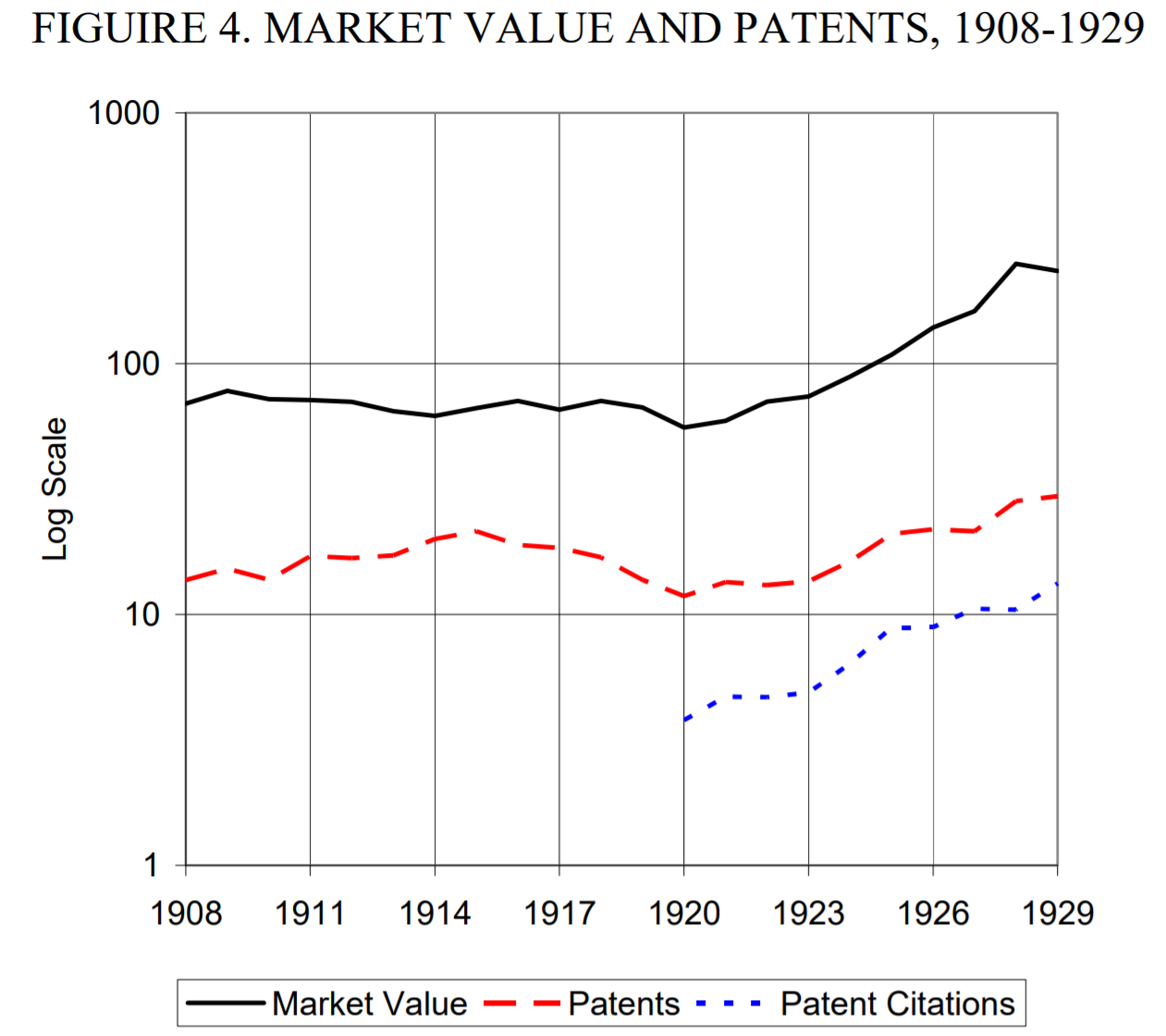 “Technological change does trigger booms in the stock market. The 1920s was a remarkable decade of technological progress and intangible capital growth. By 1920 electricity had surpassed steam as a source of power for manufacturing, and by 1929 accounted for 78 percent of total capacity…

As the threat of creative destruction in product markets increased the marginal benefits from investing in search for new technologies, firms that innovated received sizeable stock market payoffs. As capital markets became increasingly liquid due to the entry of additional investors, innovation could be financed by access to external sources of credit. Investors both financed innovation directly, and indirectly they encouraged investment in technological development by inducing stock market rewards for innovation.“

How Unique is VC’s American History? 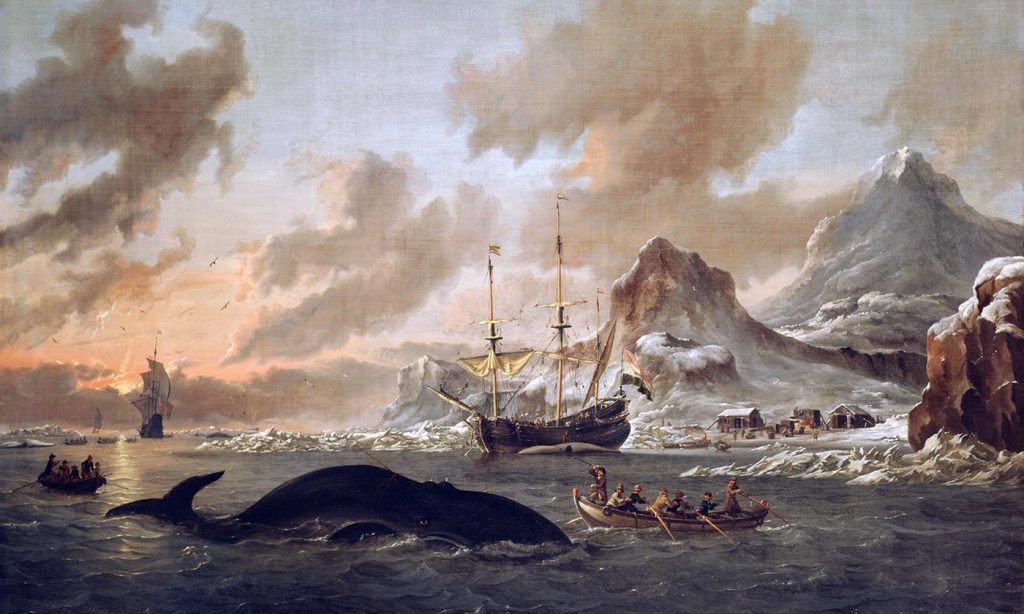 Many subscribers may have read “VC: An American History” by Tom Nicholas in the last few years. While his book was excellent and I’d highly encourage people to read it, the book only focused on American history. This paper offers a global context for venture capital’s history, and assesses whether or not the American experience was unique in nature. As most modern innovations are now funded in the private markets by venture capitalists, it is useful to study whether American’s historical approach is distinct from the rest of the world.

“VC: An American History offers a compelling chronicle of the development of professional venture capital (VC) in the United States, from VC-like forbearers as diverse as 18th century cotton manufacturing and 19th century whaling up to the state of the modern VC market at the turn of the millennium. The book emphasizes America’s enduring advantage in venture capital as a consequence of these early developments and as a practical governance solution for investing in the long-tailed returns of risky new ventures.

In this essay we discuss similar historical precedent and governance arrangements in the spice trading voyages of the 16th and 17th century Dutch Republic, calling into question the uniqueness of the early American VC ancestors. Moreover, far from being a distinguishing feature of early ventures, long-tailed returns exist even in public equities, suggesting that the VC governance structure is about more than the distribution of returns. We conclude that the reasons for American dominance of contemporary VC remain unclear. Picking up where the book leaves off, we summarize facts and trends in 21st century venture capital.” 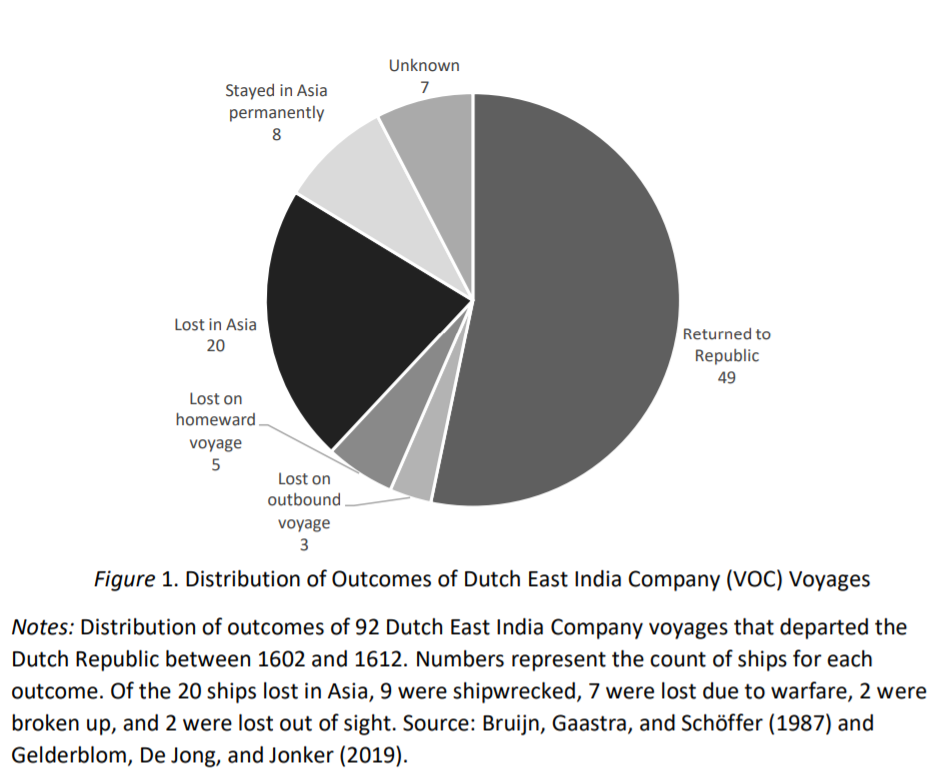 “Sailing to Asia and back around the southern tip of Africa was a risky and time-consuming business. Running aground, bad weather, capture by pirates or privateers, or acts of war could result in the loss of ship, cargo, and crew. Figure 1 shows the fate of the 92 voyages that departed the Republic In the first decade of the VOC’s existence. Only 49 ships (53%) ultimately made it back safely. Eight ships (9%) were lost on the voyage to or from Asia (three on the trip to Asia and another five on the way back)…

Even conditional on survival, the returns generated by a ship’s voyage were volatile. The initial pre-company voyages of four ships in 1595 barely broke even. Later trips were considerably more lucrative. For example, the voyages of ships sailing from Amsterdam between 1595 and 1601 earned a 27% average annual return.”

Speculation is Necessary. Governments Can Help. 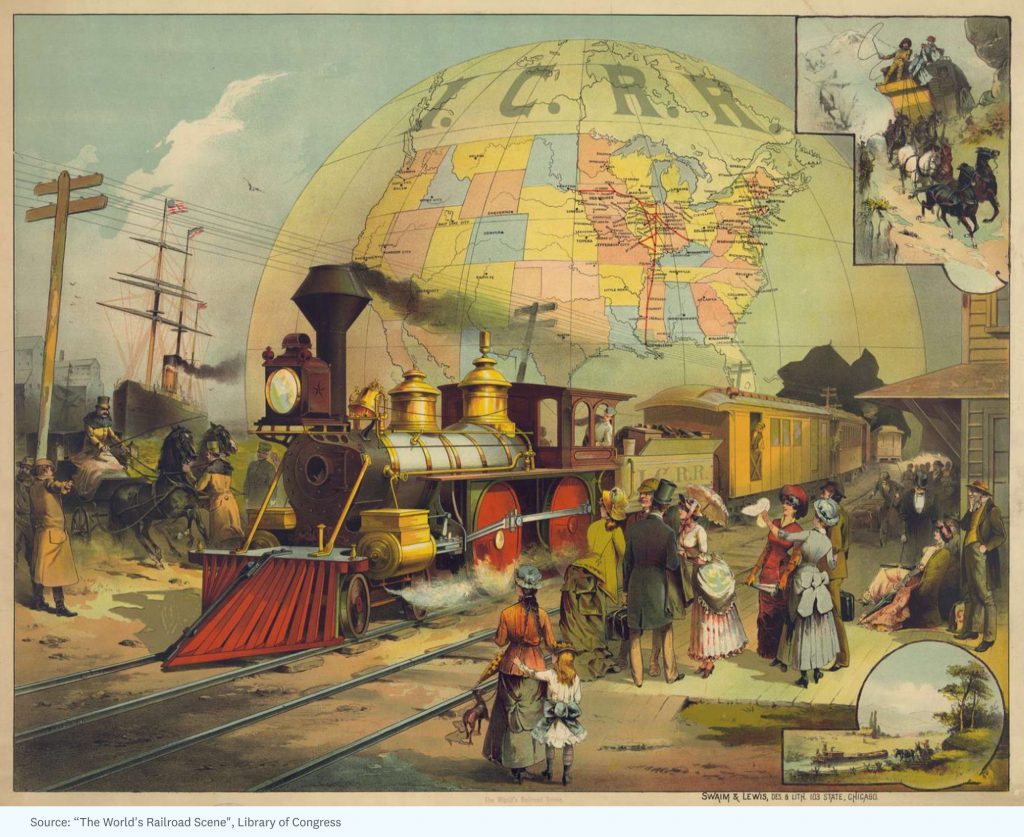 I wrote this article for the AndreessenHorowitz ‘Future’ website launched this summer, and argued that as a society, we should figure out ways to channel speculative activity into productive ventures that benefit our country instead of trying to curb speculation itself. The Speculative Feedback Loop highlighted below is similar to the underpinnings of Chris Dixon’s “Price-Innovation Cycle”.

“The government helped foster speculation in railway shares by playing to the innate behavior of investors. Rather than standing in the way of speculation or trying to curb it, the government took full advantage of it by offering land grants to encourage more railroad companies to form. Investor’s speculative tendencies took care of the rest. Soon, a feedback loop for speculation had formed.”

From an 1854 newspaper article:

“Difficulties are only the stimulus of endeavor.

The Americans have been overtrading and over-speculating ever since they were a nation; their liabilities have always been, more or less, a mortgage on futurity; but they have never yet failed to find a way, wherever they had a will to force them forward in search of it…

They have heavier engagements on their hands at the present time than they can cover without a little embarrassment, but their present embarrassment arises from the investment of capital in enterprises [railroads] that, speculative as many of them may have been, will vastly enhance the available resources and accelerate the future progress and prosperity of the republic.”

Returns to Investors in Stocks in New Industries 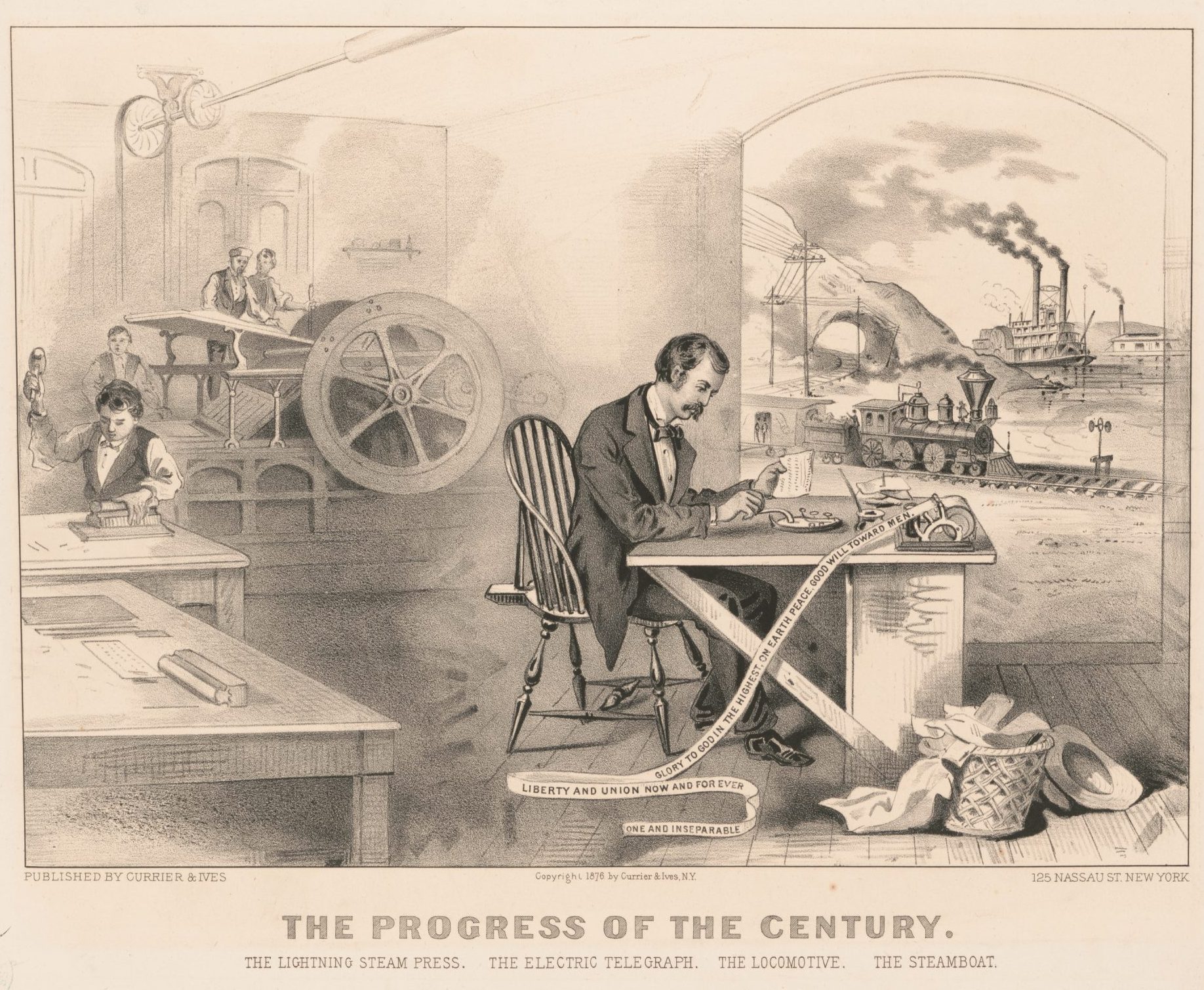 The theme of today’s post is investing in innovations or exciting new industries, and how speculation plays a key role for funding. This paper dives into the returns for investors in these new industries throughout history, covering railroads, telegraphs, computers, etc.

“We examine the returns to investors in publicly traded stock in new industries. We examine data from the United States on sellers of own-brand personal computers, airlines and airplane manufacturers, automobile manufacturers, railroads, and telegraphs. We find that a relatively small number of companies generate outstanding returns and many firms fail. Firms in new industries typically have high volatility of individual stocks’ returns. Compared with indexes for the same period, expected returns of firms are higher for two industries, lower for one industry and roughly the same for two industries. Portfolios of firms in new industries generally have lower Sharpe ratios than the overall market.”

“Western Union stockholders clearly did well. A dollar invested in Western Union at incorporation in April 1851 was worth $1,816.75 at the end of 1865. This is an annual average proportional return of 28 percent per year for almost 14 years.”