How the Drivers of Market Returns Evolved

By Jamie Catherwood August 21, 2022 No Comments 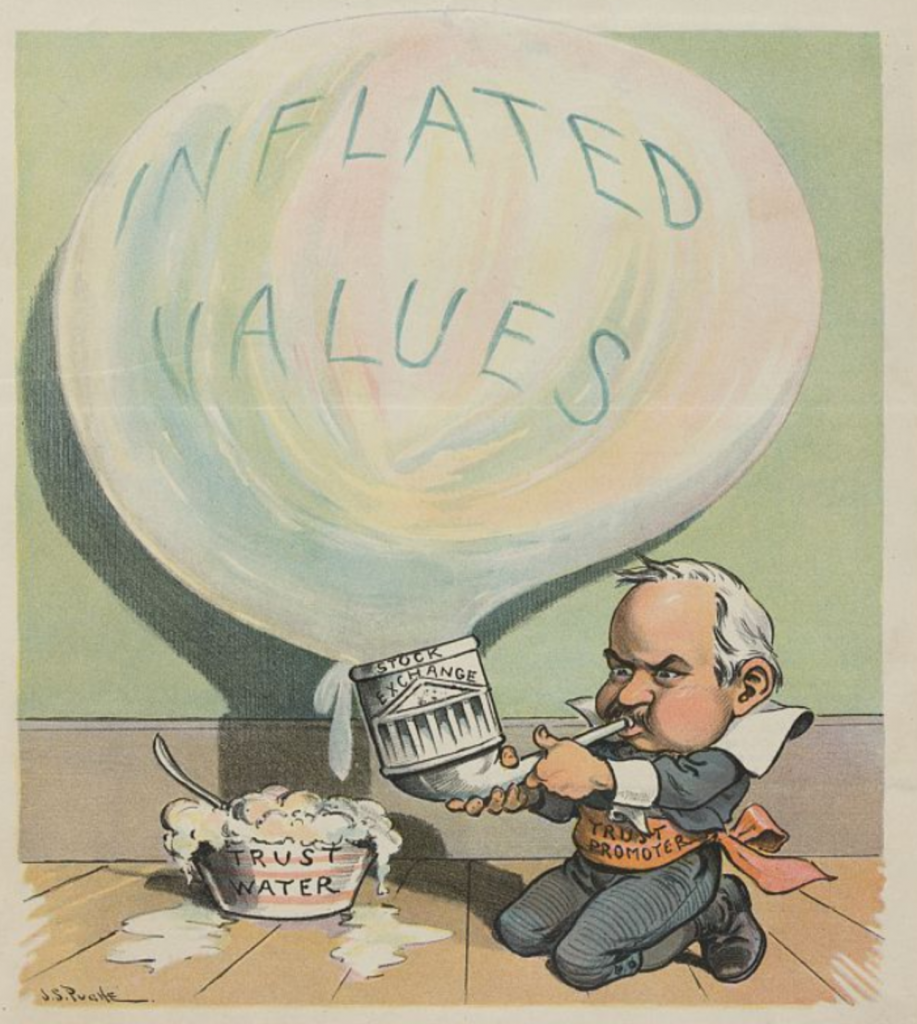 The Future of Investment Research: Edge Out the Competition with AI

Technology, especially in the wake of the pandemic, is rapidly evolving, which means the future of the investment research market is changing too. Increased demand for in-house proprietary research is driving a greater need for investment firms to adopt new research methods to remain competitive. A study by Thomson Reuters and Greenwich Associates found that while only 17% of firms were using AI as part of their investment process, 77% anticipate AI to possess high or very high overall importance to their businesses within two years.

Join this webcast to hear from an investment research expert to better understand: 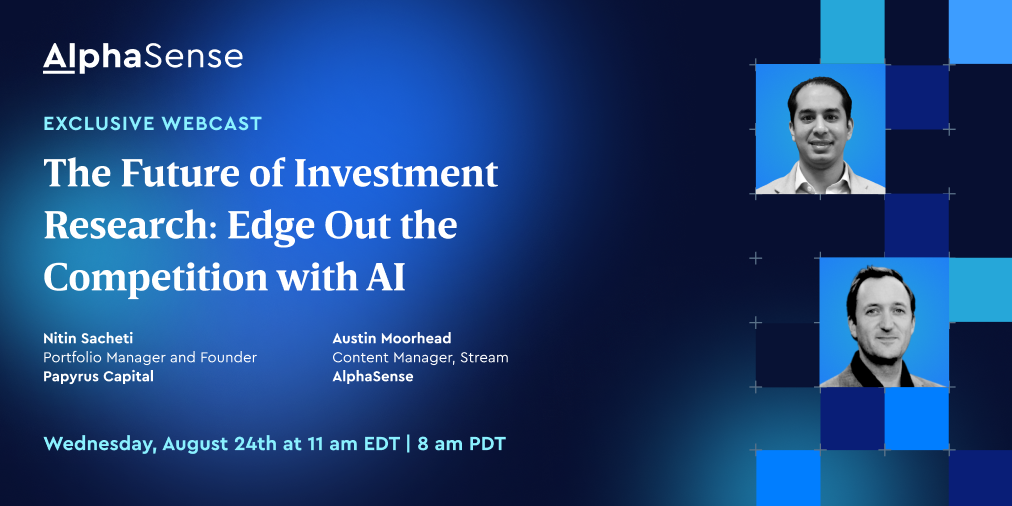 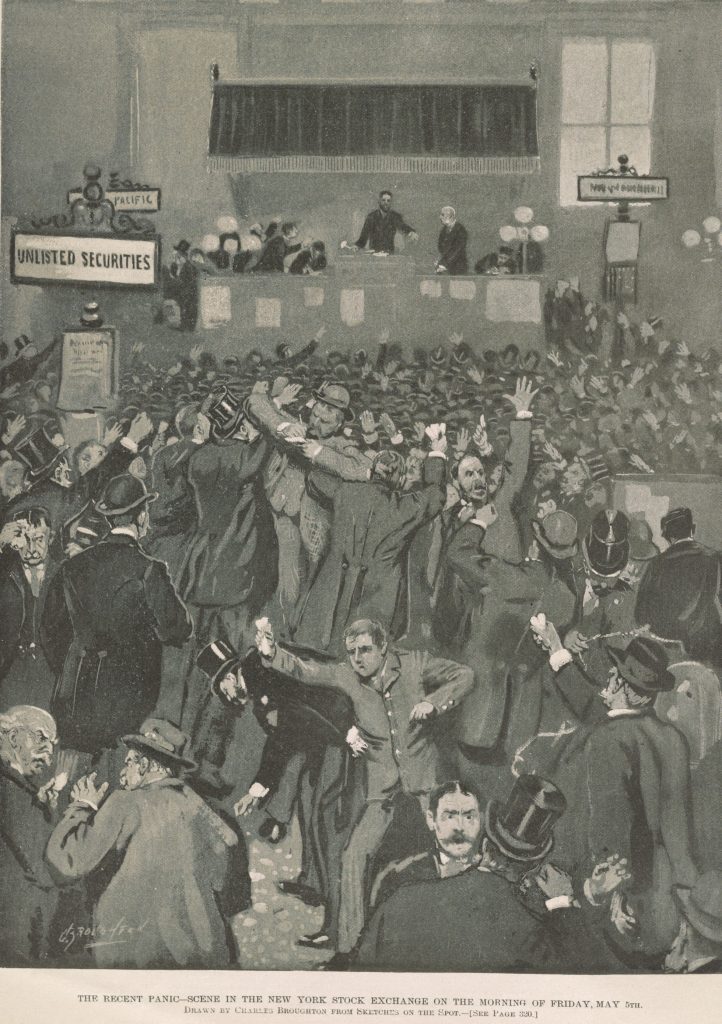 I wrote this article for O’Shaughnessy Asset Management, and it first appeared on the Canvas website. If you’d like to read it in full on Canvas and learn more about our Custom Indexing platform, click here!

Share prices and investors’ interest in fundamentals often have an inverse relationship over shorter timeframes.

While there are few long-term winners in such environments, the reduced focus on critical details like earnings and valuation benefits the type of company that usually captures investor enthusiasm during speculative booms. These companies are generally unprofitable, have vague financials, and trade at high valuations. Yet, they usually do have exciting narratives about technological innovation, disruption, and future earnings.

One advantage that these unprofitable companies arguably have is that without existing profits, it’s impossible to compare the practicality of future profit projections.

In Simple Principles of Investment, published in 1919, the author joked:

Consequently, companies in this camp have more “gray area” to stir up enthusiasm, as it’s harder to disprove the feasibility of their narratives and projections. As a result, without actual profits, the company narrative becomes increasingly important for attracting capital.

How is this executed in practice? Well, some approaches have barely changed in more than a century:

“One of the principal reasons why people hazard their funds in these so-called [speculative] securities is that there are a few instances where such ventures have proved highly profitable from the start, and the promoters are adept in stressing and emphasizing these exceptional cases…

Corporations load their prospectuses with figures showing the great profits that could have been made by buying Standard Oil or General Motors at ground-floor prices, concluding with confident predictions that their particular ventures will duplicate these performances – which they never do.”1

The Role of Cheap Money

The problems outlined above are only exacerbated by supportive monetary policy. First, low interest rates and cheap financing enables more speculative enterprises to form. Second, since many investors must re-allocate capital from low-yielding assets to riskier investments, these speculative companies attract investors with exciting narratives and promises of future growth.

An investing book from 1873 described how a “flood of paper money [credit] poured from the steam presses”, which “sufficed now to float all kinds of speculative enterprises.”2

Should the share prices of speculative companies go higher, a feedback loop forms in which rising share prices encourage more speculation, which raises share prices, and so forth.

Before long, however, the market reaches a state like that characterized by the Spectator Magazine in 1896: “[an] inflated and flabby condition caused by a diet of cheap money.”

In the chart below, one can clearly see how credit booms negatively impact future equity returns.

THE IMPORTANCE OF FUNDAMENTALS

The problems for speculative companies and their shareholders begin when markets fall and enthusiasm wanes. While a powerful narrative and forecast of future profits can temporarily drive share prices higher, these are not sustainable sources of long-term performance.

Eventually, every company is a business, and every business needs profits. To that end, our research highlights three enduring drivers of long-term market returns: 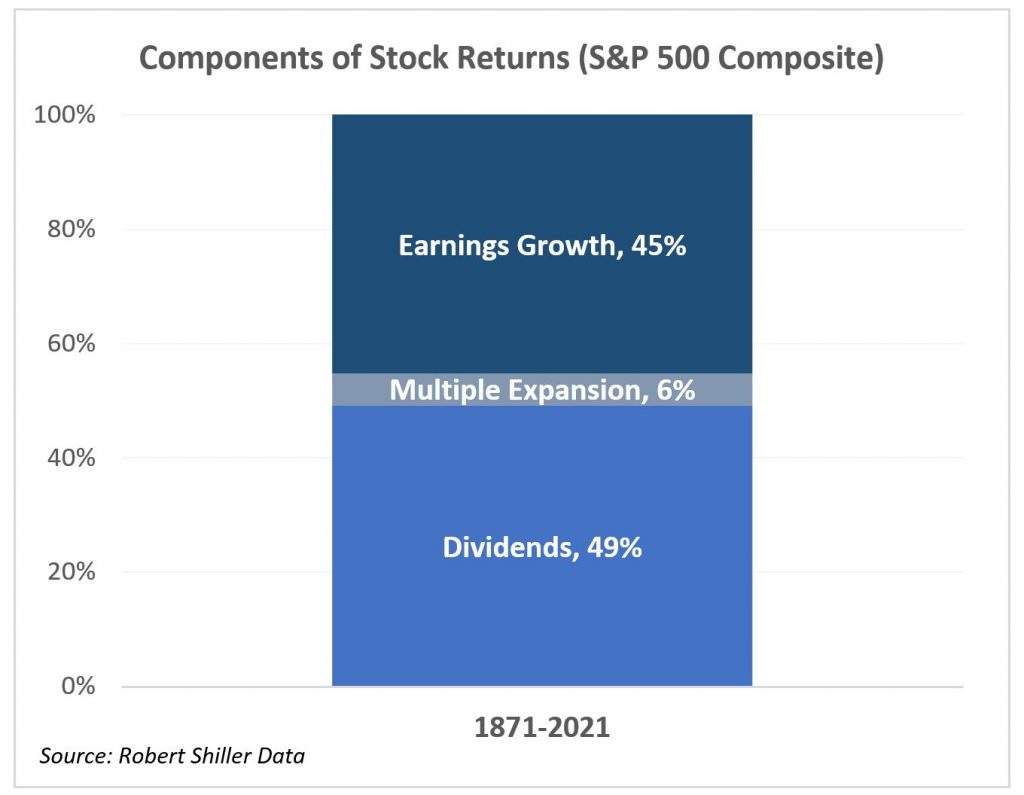 Interestingly, from 1871 – 2021, Multiple Expansion was responsible for just 6% of the S&P 500 Composite’s return. Again, Multiple Expansion simply reflects the willingness of investors to pay more for each $1 in earnings that a company generates (in other words, buy stocks at a higher P/E multiple).

Why would an investor decide to pay more money for the same amount of earnings?

The answer lies in the investor’s expectation that future earnings growth will justify the current (high) valuation. Unfortunately, humans have a very poor track record in predicting the future. Consequently, projections of future earnings tend to be overly optimistic.

However, this also explains why companies with less robust fundamentals (i.e., earnings growth) emphasize intangible things like narrative and future disruption / innovation. Done well, these intangible items can entice enthusiastic investors into paying a higher earnings multiple for their stock.

The Increasing Importance of Multiple Expansion

Although Multiple Expansion only accounted for 6% of the S&P 500 Composite’s total return between 1871 – 2021, that figure has risen to 24% over the last decade. 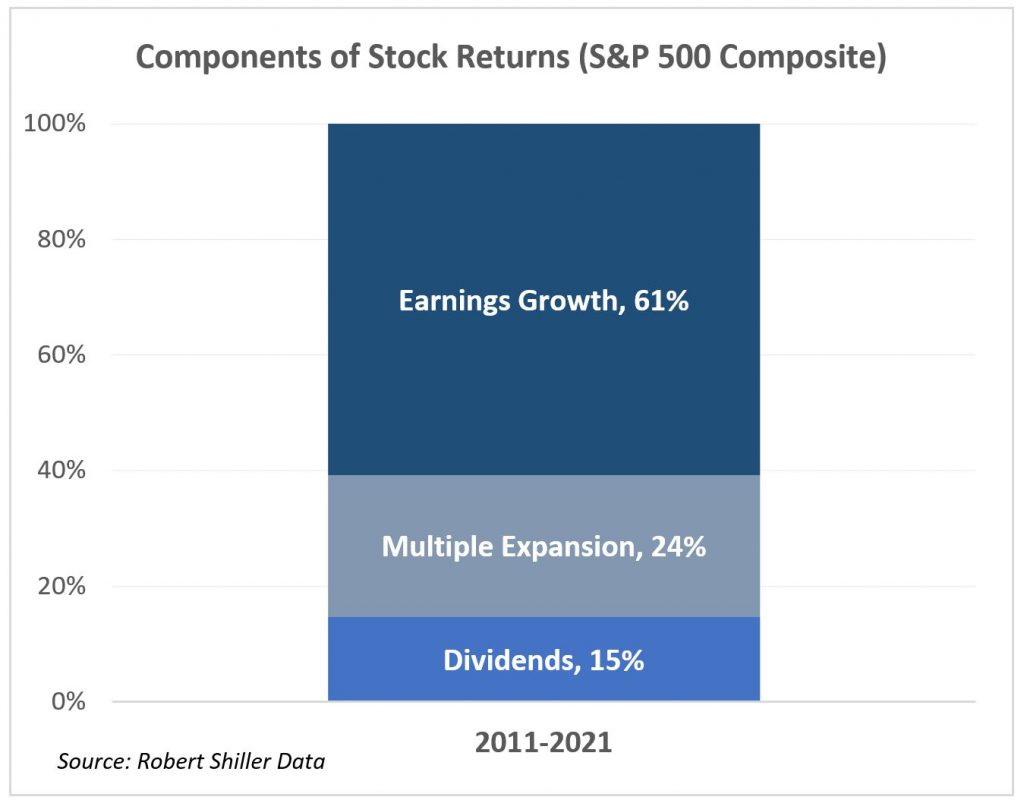 When using OSAM’s US Large Cap Stock Index and expanding the components of total return to include Profit Margin Expansion (and Buybacks alongside Dividends), the comparison is even more stark. 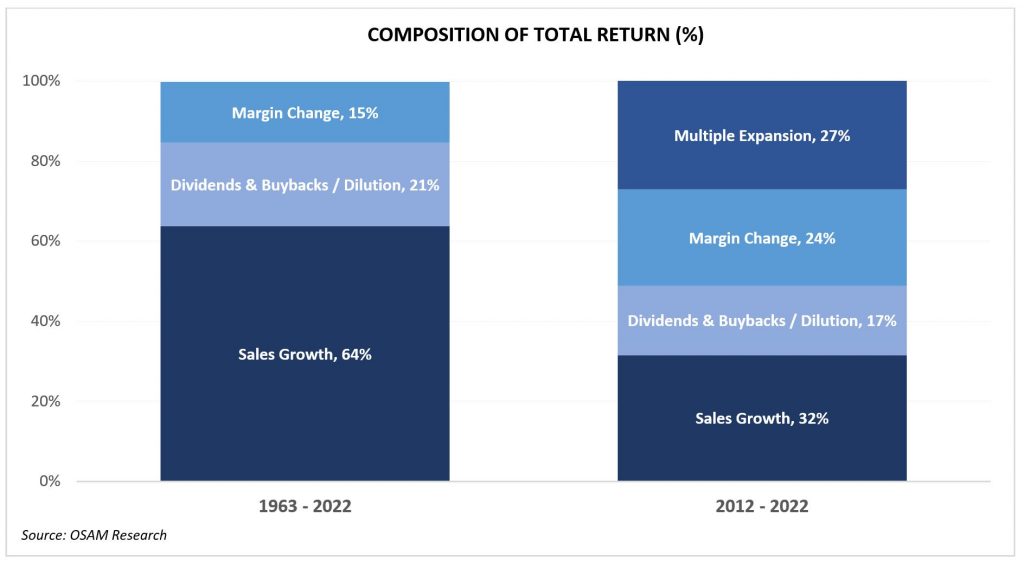 Why does this matter?

Since Multiple Expansion has become a key driver of total returns, a significant portion of the equity market’s return is now derived from a “speculative” component based on expectations. As discussed, this speculative component is influenced by the powerful narratives used to entice investors.

For example, at the beginning of the pandemic, when many people were preaching that life as we knew it had irrevocably changed (e.g., no more in-person meetings, the death of business travel, etc.), shares of work-from-home stocks like Zoom traded at 464.8x next year’s earnings.3

However, investors should remember that companies primarily generating returns from multiple expansion are susceptible to wild swings because this is the least tangible source of total return. A company’s earnings don’t change on a whim, but investors’ willingness to pay higher multiples for the same stock do.

This is a great irony of the speculative feedback loop described earlier. When asset prices are rising, investors typically require less conviction or belief in an asset to purchase it. When prices are falling, however, investors meticulously study the merits of an investment and make sure they have strong conviction in its prospects.

When that happens, it’s often too late to try and increase earnings or bolster other important fundamentals that were left ignored for far too long. 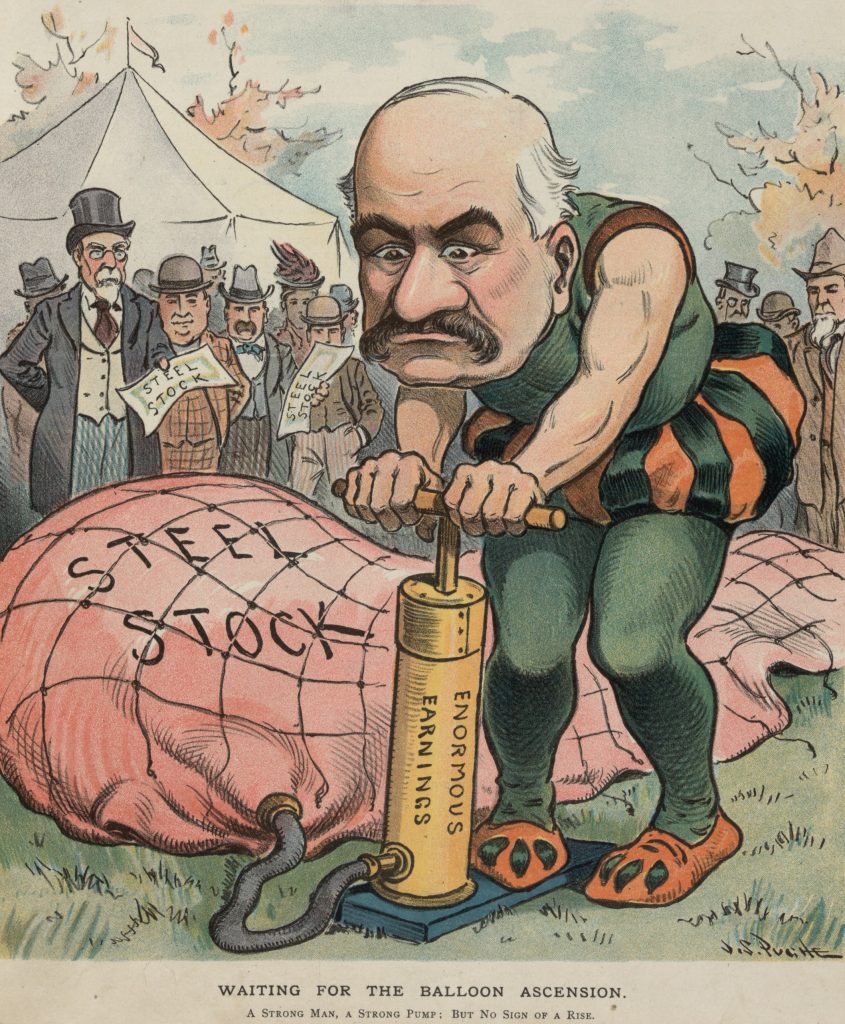 Many companies learned this lesson the hard way in 2022. The market selloff, soaring inflation, and rising interest rates has been accompanied by a substantial uptick in layoffs at the companies that thrived in a world of low interest rates, indiscriminate VC funding, and a disinterest in fundamentals. Technology and technology-adjacent companies have been particularly hard-hit:

“With markets falling and interest rates rising, start-ups and money-losing tech companies are changing the way they do business. In a recent letter to employees, Uber’s CEO, Dara Khosrowshahi, said the firm needs to “make sure our unit economics work before we go big.” That’s chief-executive speak for: We gave Derek a nice discount for a while, but the party’s over and now it costs $50 for him to get home…

It was as if Silicon Valley had made a secret pact to subsidize the lifestyles of urban Millennials. As I pointed out three years ago, if you woke up on a Casper mattress, worked out with a Peloton, Ubered to a WeWork, ordered on DoorDash for lunch, took a Lyft home, and ordered dinner through Postmates only to realize your partner had already started on a Blue Apron meal, your household had, in one day, interacted with eight unprofitable companies that collectively lost about $15 billion in one year.

These start-ups weren’t nonprofits, charities, or state-run socialist enterprises. Eventually, they had to do a capitalism and turn a profit. But for years, it made a strange kind of sense for them to not be profitable. With interest rates near zero, many investors were eager to put their money into long-shot bets. If they could get in on the ground floor of the next Amazon, it would be the one-in-a-million bet that covered every other loss…

This arrangement is tailor-made for a low-rate environment, in which investors are attracted to long-term growth more than short-term profit. As long as money was cheap and Silicon Valley told itself the next world-conquering consumer-tech firm was one funding round away, the best way for a start-up to make money from venture capitalists was to lose money acquiring a gazillion customers.”

This paradigm that Derik described so perfectly is one that’s existed for the better part of a decade. In this environment, simply “buying the dip” every time technology stocks (and the overall market) fell was a simple – and generally successful – strategy. However, those days are fading. Fast.

A decade is a lifetime in markets, and investors quickly forget what decades of empirical evidence proves: fundamentals matter.

Flashy narratives often fade, but robust fundamentals endure. Investors should heed the lessons of this selloff and ensure that they have conviction in the underlying businesses of stocks they own, and not just their share price.

2 William Fowler, Inside Life in Wall Street, or How Great Fortunes are Lost and Won (1873)